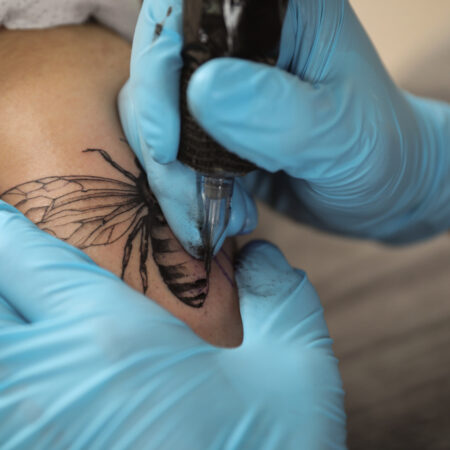 A small, often misunderstood insect, bees are integral to the pollination of a wide variety of plants, many of which we rely on today as a primary food source. As such, bees are becoming a more popular tattoo option due to their significance in our society and their versatility when it comes to tattoo designs.

In this article, we will be discussing the many meanings of bee tattoos, some commonly seen symbols in bee tattoos, and the notable mythology behind the bee. Read on to find out all you need to know about the meaning of a bee tattoo!

What Do Bees Represent?

The bee has a multitude of meanings that can represent all aspects of life.

Bees are known to be loyal, always returning to the same hive and devotedly protecting their family and the queen bee. In this way, bees can represent loyalty, family, and duty to others.

Bee tattoos can also represent order and structure, as their hives and internal organizations are some of the most complex in the insect world.

Messengers, Including of the Spiritual World

Bees are known as messengers as they travel from plant-to-plant pollinating and then back home. In many spiritual circles, the bee is regarded as an insect that will bring messages from the spirit world back to the world of the living.

The Life Cycle and Rebirth

They can represent life, growth, and fertilization, and many may choose a bee tattoo because of the insect’s connection to nature, rebirth, and loved ones who have passed.

This insect can also represent love and dedication, as they will sacrifice themselves to protect their hives and queen bee. They always know where their home is, and will always return home, so the bee can be used to represent caring, homesickness, or as a tribute to a loved person or place.

On the other hand, bees have a long history of being used throughout wars as soldiers used their hives as weapons. This can give a bee tattoo a meaning of destruction, chaos, and violence, especially when the bee is depicted as a “killer bee” or illustrated in a more aggressive manner.

Strength in the Face of Adversity

Instead of representing violence or destruction, many people often get more aggressive bee tattoos to depict that they are prepared to face any adversities that may come their way.

Throughout history, bees have played an important role in the mythology of many different cultures.

Most notably are the Greeks and Romans who regarded bees as having the power of regeneration as they pollinated and brought plants to life. Both of these civilizations regarded the bee as essential and powerful, even going to far as to refer to honey as the elixir of the gods. This sentiment is represented throughout Greek and Roman mythology.

In ancient Egypt, bees were kept for their honey and used to represent royalty. They were also used in ritualistic practices and immortalized as images in hieroglyphs.

Even further back in history, the Minoans of Crete used the symbol of the bee as a representation of their mother goddess and had priestesses that worshipped the bee.

Additionally, Celtic druids honored the bees as a symbol of the sun, nature, and community.

More recently, the symbol of the bee has come to take on a new meaning. In 2017, individuals began to get the worker bee, a symbol for the city of Manchester, tattooed on themselves after a terrorist attack at an Arianna Grande concert in the city.

The trend was first started by tattoo artists in and around Manchester as they offered small bee tattoos and donated the proceeds to victims, but itquickly grew into a global trend as more supporters and survivors wished to show their solidarity after the attack.

Today, the bee remains as a representation of Manchester’s sense of community and warmth, a symbol of camaraderie, and a promise that the victims of this tragedy will not be forgotten. 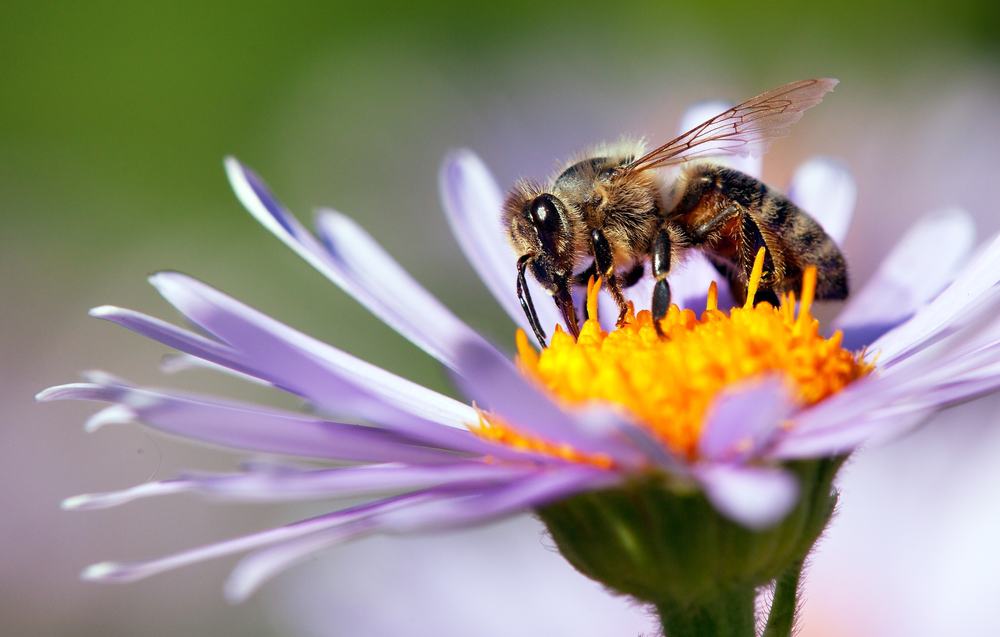 Commonly Seen Symbols in Bee Tattoos and Their Meanings

These symbols are often combined with the image of a bee in a tattoo and can reinforce a meaning and bring the work its own unique nature.

Elements of nature, including flowers, grasses, and trees, are often depicted alongside images of bees. This reinforces the meaning of the bee as a messenger and a symbol of rebirth, and can bring a special meaning to the image depending on the type of plant used.

Some of the most popular nature elements in bee tattoos include daisies, roses, and sunflowers; these plants can also help reinforce the tattoo’s meaning of growth and the Spring season.

There are many elements that can be combined with bees to depict royalty. The most popular of this is a picture of the queen bee, which is typically defined by a crown on or near the bee’s head.

The queen bee represents strong leadership and feminine power, and can make a great tattoo design for someone who wants to illustrate their ability to lead and take charge, or who wants to represent a strong feminine authority.

Honeycombs are incredibly complex, and when combined with a bee, they reinforce the meaning of structure and order. They could also help represent the meaning of home, collaboration, and dedication, as it takes many bees significant time to work together and properly build a honeycomb.

A tattoo that portrays multiple bees is suited to someone who wants to depict family, duty, and love. Bees are known for their close relationships and dedication to one another, and multiple bees can help solidify this tattoo meaning. Additionally, it could represent loyalty, as bees will give their life to protect one another.

Bees that are drawn aggressively or depicted with images of weapons or war typically reinforce the meaning of aggression, violence, destruction, and chaos.

Despite this intense meaning, killer bees accompanied by these other elements could portray that the wearer of the tattoo faces adversities head-on and at full force. It could also be a representation of life experiences witnessed so far.

Often regarded as the food for the gods by ancient Greek and Roman societies, honey or a honey pot pictured alongside a bee can give the tattoo a meaning of abundance, prosperity, and life. Honey has long since been regarded as a special ingredient with unique properties and could also bring a meaning of healing and happiness to the tattoo. 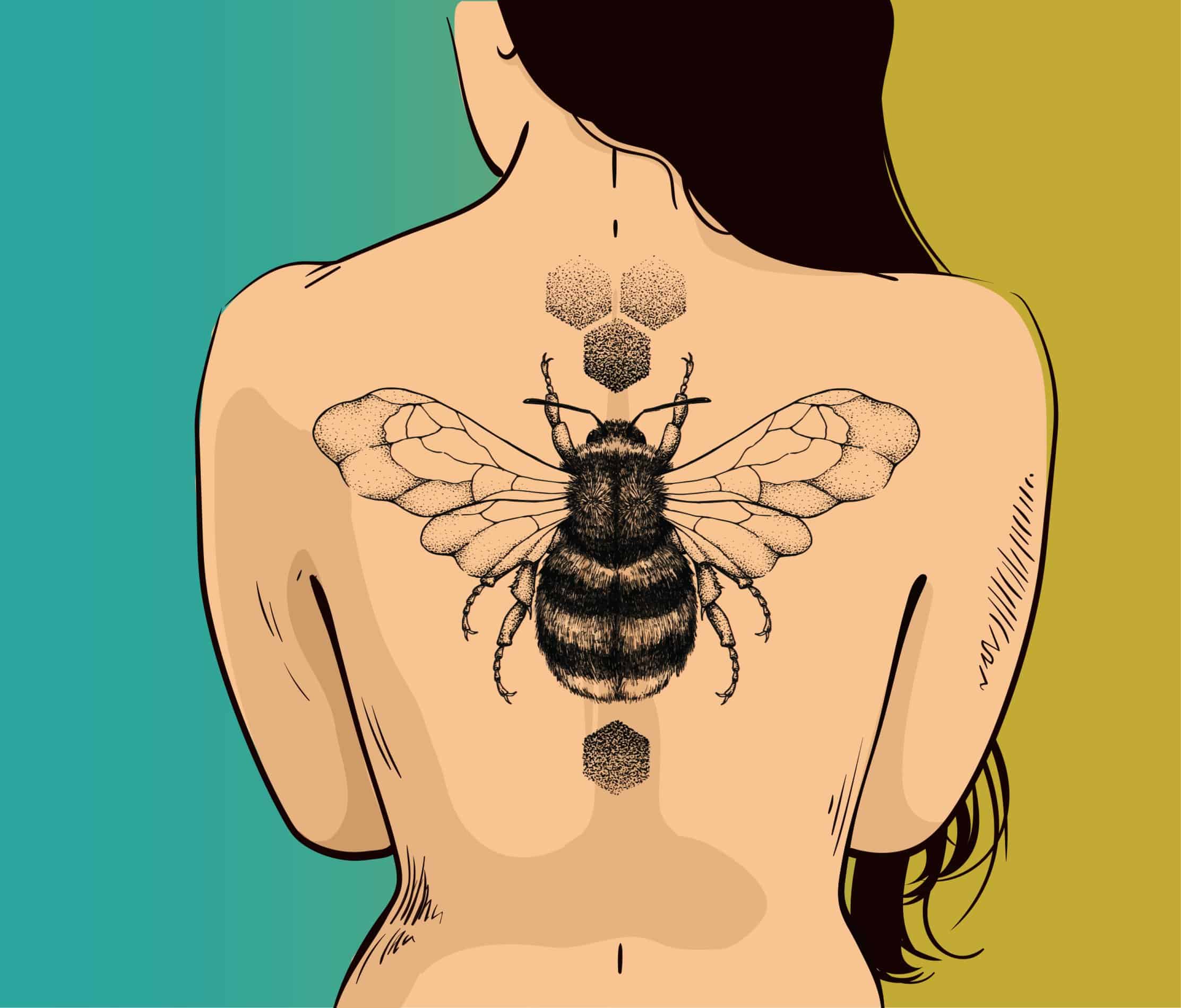 What to Expect When Getting a Bee Tattoo

Once you’ve committed to the idea of getting a bee tattoo, your next step is to find an artist in your area who you feel will be best suited to your design.

Make sure to read reviews of the businesses and examine each artist’s portfolio to ensure that their style matches your expectations. It may also help you to investigate different tattoo styles you might like before settling on a bee tattoo concept.

Set up Your Appointment

After you’ve selected an artist, set up an appointment with them. Depending on how the artist runs their business, you may communicate your ideas with them via email before the appointment or discuss your tattoo design on the day of the appointment.

Double-Check the Design After Stenciling

On the day of your tattoo, your artist will draw up a stencil for you of the image that you’ve both agreed upon. Once they put the stencil on your body, double check everything to make sure it is the way you want it. This is your last chance to change something before the ink goes on.

As soon as you’ve given the ok to the stencil design and placement, your artist will begin the tattooing process. How long this takes depends on the complexity and placement of your design.

When it’s finished, your artist will give you guidelines on how to care for your tattoo as it heals. This processes typically takes 2 to 3 weeks for initial healing, and up to 6 months for complete healing below the skin. Using a tattoo lotion can help aid the healing process as well.

All that’s left after the tattoo is healed is to enjoy your new bee tattoo and the special meaning that it holds for you!

The Best Bee Tattoo for You

A small but invaluable member of the insect world, the bee is mentioned throughout history and holds many different symbolic meanings. You can enhance these meanings by adding different natural elements or art styles into your bee tattoo, or you can simply wear your bee au natural.

Whichever way you go, as long as you keep in mind the specific meaning you are intending for your tattoo and work with an artist to bring your vision to life, you will be sure to find the best bee tattoo for you.