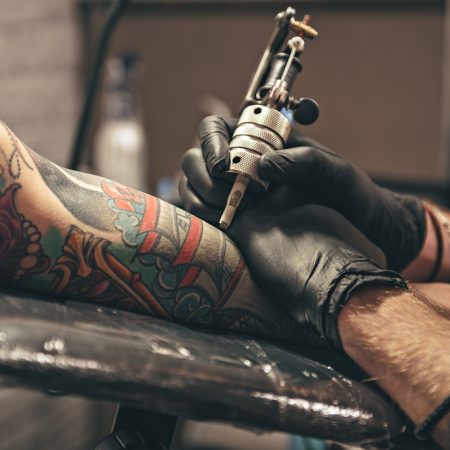 Tattoos are one of the oldest methods of human creative expression. In fact, tattoos have been discovered on mummies that are up to 3,000 years old. While it wasn’t until around the 1700s that Western culture began to adopt tattooing, today there are a multitude of different tattoo styles that have evolved over time.

Whether you’re considering a new tattoo or want to learn more about your current tattoo’s style, we’ve put together a guide to today’s most popular tattoo styles. This list doesn’t include every single tattoo style out there, as there are many subcategories and small niche areas, but it does include the most important ones that have contributed to tattoo culture, and the most commonly practiced styles in today’s society.

Traditional tattooing, also referred to as old school or Americana, is one of the first prevalent tattoo styles adopted by the west. It first appeared around the 1930s, and symbolized a rejection of the typical American Dream.

During World War II, the style experienced a revival in popularity thanks to a man named Norman Collins, aka Sailor Jerry. Many Americans at the time used traditional tattoos to represent a refusal of mainstream culture.

This style is characterized by solid, clean black outlines and vivid colors, most prominently red, greens, and yellows. There is minimal shading involved in these tattoos, and they typically depict women, skulls, roses, and ships. It is a notably bold and iconic tattoo style. 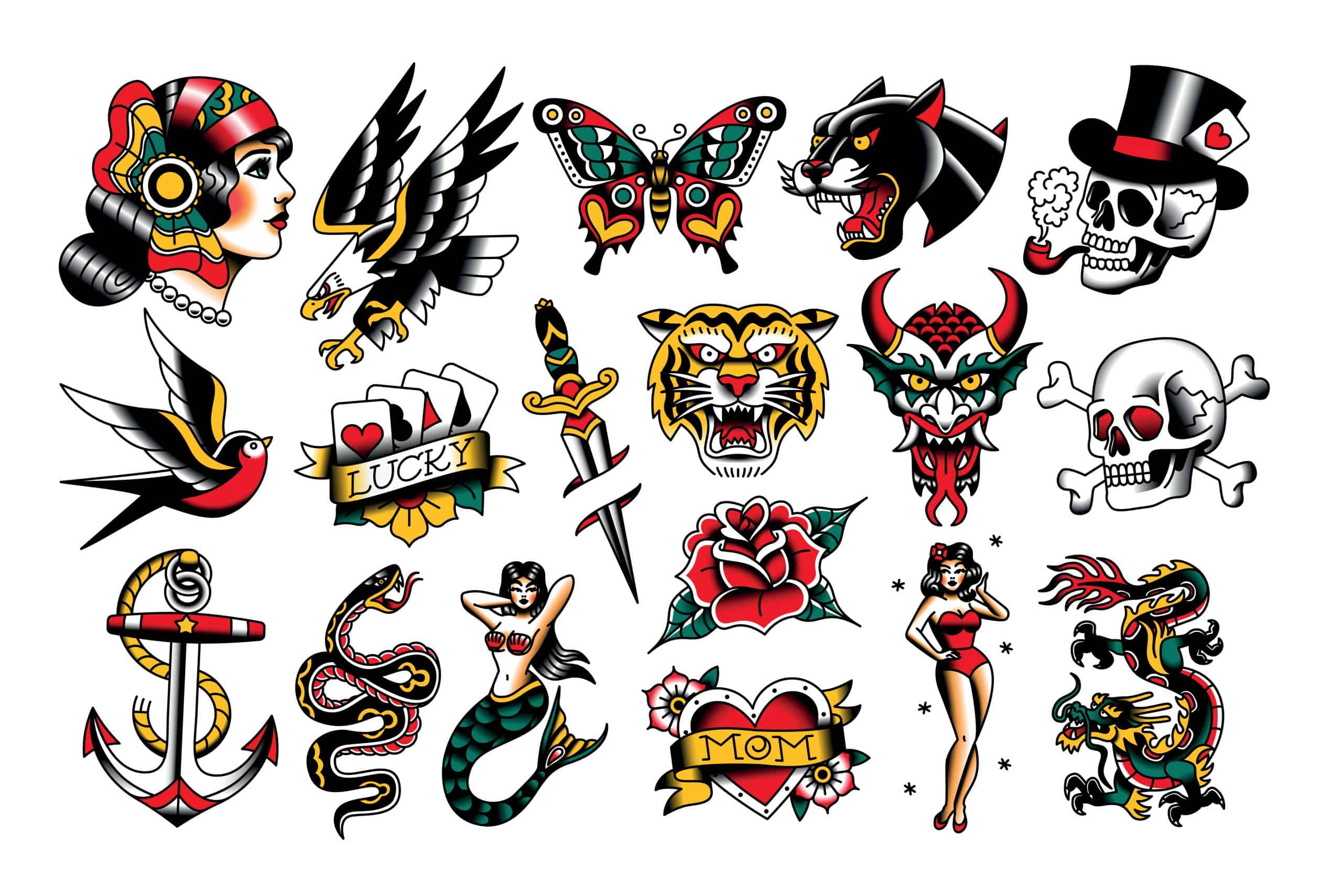 A modern adaptation of Old School/Traditional tattoos, the neo traditional style features similar solid black outlines and a vivid color palette of classic colors. However, these designs are more three-dimensional and often feature images that are not part of the traditional repertoire.

Neo traditional is more illustrative in nature and has a larger range of both colors and motifs; flowers, faces, and animals are popular subject matters for this style.

New School tattoos rose to popularity around the late 80s and early 90s. They are cartoonish in design and gain much of their aesthetic from popular animation present in that time period. Images often feature caricatures and exaggerated figures along with a variety of vivid colors.

Realism tattoos largely find their base in the Photorealism art movement of the late 1960s. The style has evolved to consist of a wide range of realistic images in both shades of black and grey, and full color. Tattoo artists use a variety of different pigments to map shadows of a photograph, perfectly capturing the lines and contours on the skin, creating a realistic image.

A subcategory of realism, portraiture tattoos are often highly realistic reproductions of people, such as celebrities, family members, and movie and tv characters. They can also depict beloved animals and pets. Portraits can be completed in shades of black and grey or by using color.

Styled after watercolor paintings, watercolor tattoos are light in color and smoothly blended. It is currently one of the more popular tattoo styles of this decade, and can be characterized by designs such as flowers and animals.

The colors used are more pastel in nature, consisting of pinks, blues, and other soft colors. These tattoos are drawn without outlines, which helps create a free-handed look, as if the tattoo had been created with a paintbrush.

Tribal tattoos originate from indigenous tribes, particularly the Polynesian and Māori cultures. They are characterized by thick, black lines and intricate designs. Tribal tattoos can also consist of black bands, either thick or thin, that encircle the wearer’s arm.

Original tribal tattoos represented different aspects of the wearer and their families; almost every indigenous culture has their own distinctive tattoo look, so while they are all referred to as “tribal” tattoos, there is a great amount of depth beneath each individual design.

Also known as Irezumi, Japanese tattoos are large in scale, typically covering entire arms, backs, or the entire body. The style developed around Japan’s Yayoi period between 300 BC and 300 AD, and contains rich, colorful detail.

It is a more in-depth style of tattoo with artists having to follow a strict rule structure, such as pairing certain animals and flowers, and depicting religious icons, such as Buddha, in specific areas. The designs are often dramatic in appearance, filled with smoke and waves, and tell stories of Japan’s history.

Chicano style originated sometime in the 1940s. The history of Mexican culture, Los Angeles low-riders, and Pachuco culture heavily influenced the imagery present in Chicano tattooing. The original atheistic evolved in prisons, where inmates used what they had, usually needles soaked in black ink, to recreate images of what they missed on the outside.

Images are a combination of fine line tattooing, blackwork, and black and grey. Designs are often religiously influenced, typically with Roman Catholic imagery, and feature items such as sugar skulls and flowers.

Blackwork takes notes from tribal tattoos in that it features clean black lines and elaborate designs. Where it differs is in the fact that blackwork incorporates a wider variety of patterns and subject matter to create new, innovative pieces.

Blackwork is completed only in black ink, with no dilution, shading, or mixing of other ink colors. This is what gives each design its bold depth and intriguing appearance.

Not restricted by subject matter, black and grey tattoos can depict almost anything. It is often combined with other tattoo styles such as realism and portraiture. Black, grey, and white inks are used in combination for this style to create a variety of shades; the shading and dilution of dyes helps to create a three-dimensional tattoo effect.

An experimental style, illustrative tattoos draw inspiration from a number of different art styles, including surrealism and abstract expressionism. It also includes components of calligraphy and etching.

It is a fluid style which can often look like the illustrations drawn in a storybook; the nature of illustrative tattoos allows artists to be creative with their interpretations and can lead to many colorful, distinctive designs.

Usually depicting nature or animals in a unique geometric fashion, the geometric style of tattooing is becoming increasingly popular; it is rooted in science and mathematics, but there is an element of spirituality in the style.

Each design features geometric shapes that build together to form a complete image. The lines are exact and sharp, and images can either be completely constructed with geometric shapes, or be a combination of geometric and organic, curved elements.

These tattoos are simple and unobtrusive. They embrace the minimalist philosophy of less is more. Most tattoos done in the minimalism style are on the small side, and while they depict images, they do not feature intricate designs, heavy shading, or excessively bold lines.

Micro tattoos are often minimalistic in design, the only difference being that they are much smaller than most minimalist tattoos. They often feature small dots, lines, or letters. 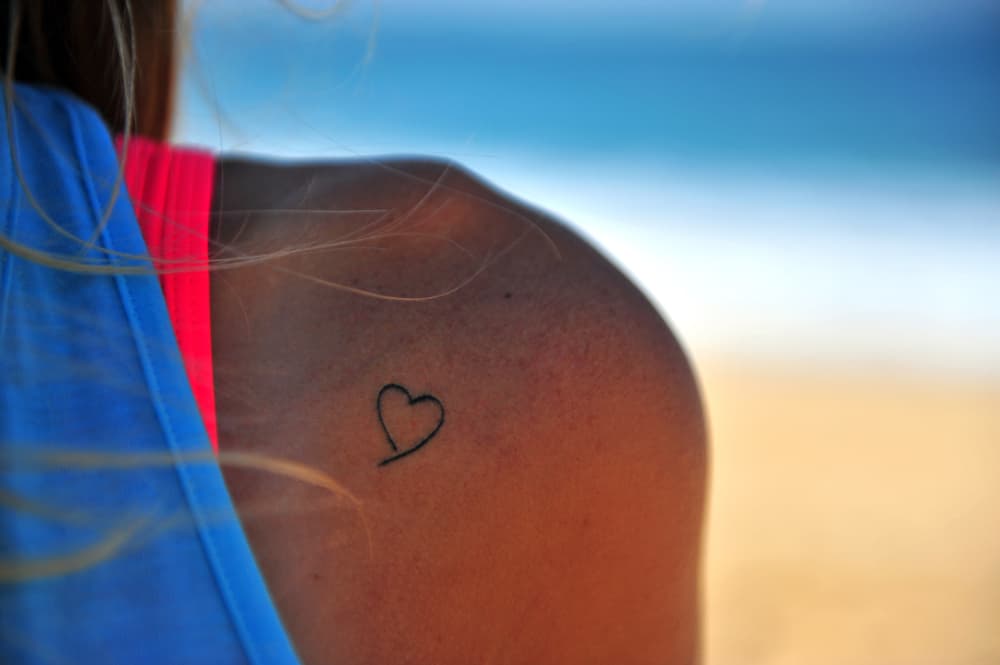 Dotwork tattoos are created using individual dots to create a larger design. They can have varying degrees of shading and detail, and can be done using several different tattooing methods, such as stick and poke. Dotwork can be merged with other styles such as realism and blackwork to create a variety of unique, deeply detailed pieces.

This style is distinguished by clean lines that create designs on the minimalistic side. There is typically no shading or coloring involved in tattoos of this style; they are a simple outline used to create understated designs.

Fine line is a subset of line work that involves very thin, very fine lines to create an image. It can be combined with other styles such as realism to help make what would otherwise be a heavy realistic tattoo appear more delicate.

Created in Germany by artists Simone Pfaff and Volker Merschky, Trash Polka tattoos are a combination of surrealistic, naturalistic, and photorealistic themes. They also have lettering, calligraphy, and graphic elements. The tattoos are mainly black and red, but other colors may be used. Images frequently resemble collages, and are designed to look disjointed and abstract. 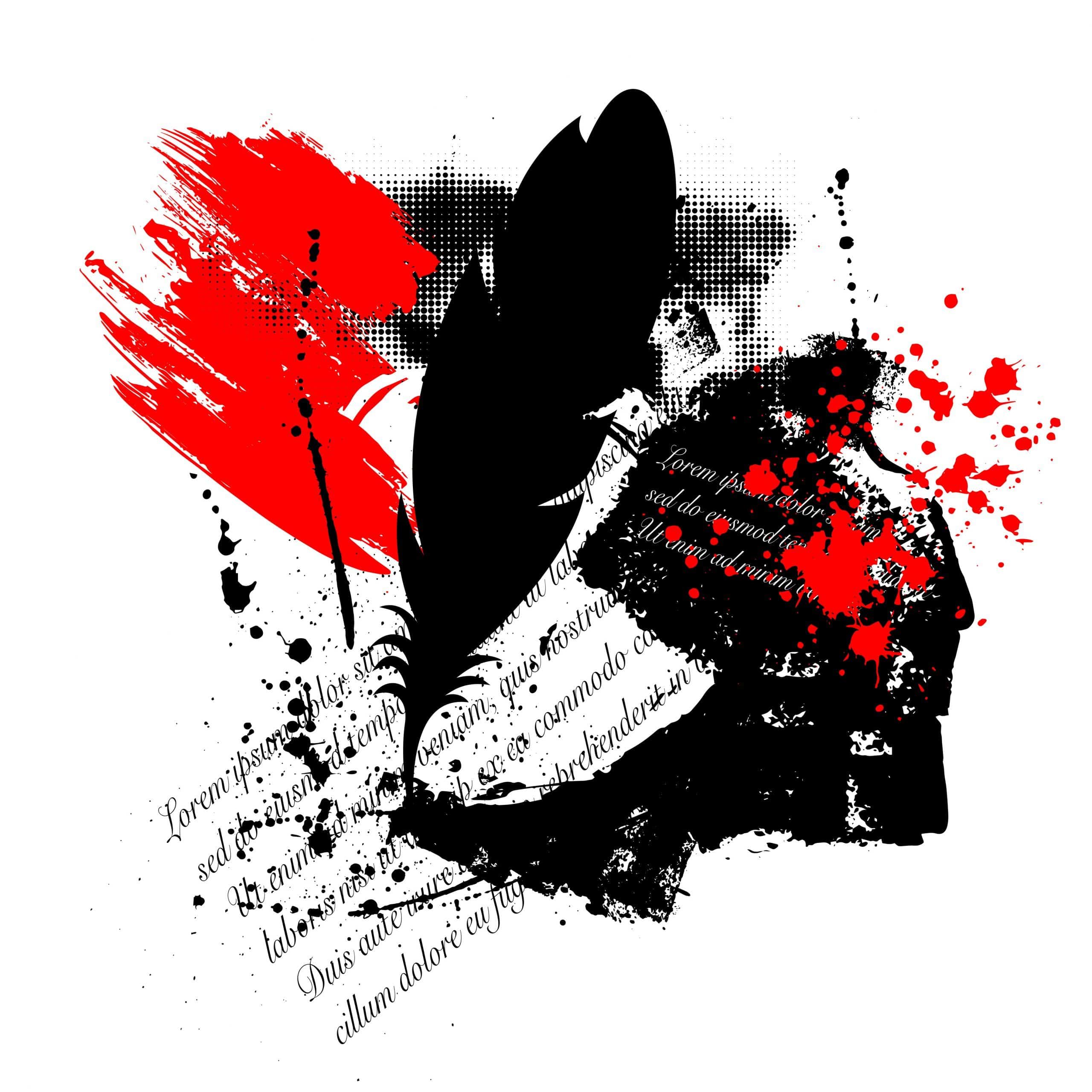 Graffiti tattoos mimic the street-art style of the same name. It is associated with a punk subculture due to the illegality of graffiti, and features images commonly seen in graffiti such as bold lettering, pop culture references, and current popular ideas. Graffiti tattoos are blended with traditional black outlining and lettering elements, and can also incorporate cartoon styling.

Lettering is an incredibly popular tattoo style. You can choose to have anything tattooed on your body such as a name, a song lyric, or a meaningful date. Lettering is often combined with other tattoo styles such as portraiture or illustrative, and can be done in black or color. You are able to get a lettering tattoo in any font, from calligraphy to larger block letters, or in any language. 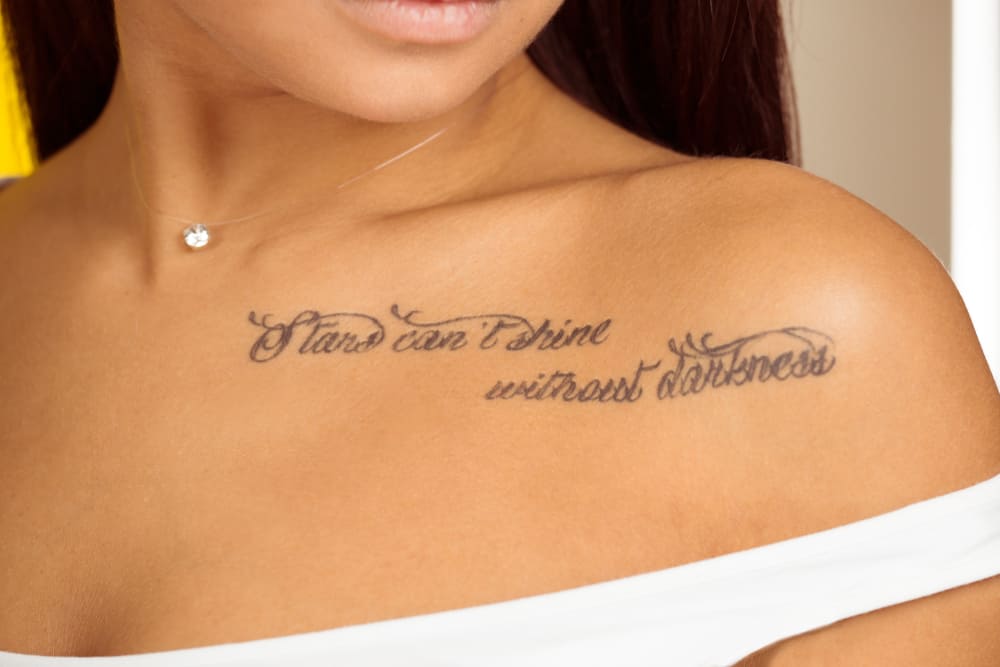 A newcomer to the tattoo scene, sticker and patch tattoos are just what they sound like: they are designed to look like a sticker or patch on your skin. Images are often pop culture characters or cartoon characters, and they appear almost three-dimensional. Patch tattoos also feature an embroidery-like design as if they were sewed onto the skin.

What to Expect When Getting a Tattoo

If you’ve never gotten a tattoo before, the process can seem confusing, and maybe even a little worrying. In reality, getting a tattoo is quite straightforward. Once you pick out what style of tattoo you want and work with an artist on the design, here’s what will happen:

Depending on the size and complexity of your tattoo, it may take one session or multiple sessions to complete your piece. Always make sure to discuss any expectations with your artist before beginning the process.

Tattoos can be a very personal decision. If one of these styles caught your eye, the best thing for you to do is more research on that specific style, followed up by a consultation with a tattoo artist. Finding an artist that specializes in your preferred style is recommended, so you can receive the best results. This artist will be able to guide you in the right direction for creating a design and help make your perfect tattoo come to life.

A tattoo is a wonderful, creative form of expression and can make an excellent keepsake. There are styles out there that fit every personality, and we hope this guide has helped you start to figure out which tattoo style will fit you the most and allow you to truly express yourself.