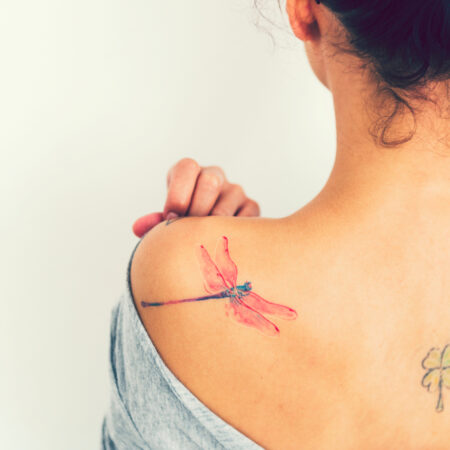 Dragonflies are exquisite creatures, featuring beautiful, colored bodies and magnificent, transparent wings. These delicate insects live on every continent on the planet, and they are most prominently seen in the summer months. As signifiers of courage, strength, good luck, and change, dragonflies are quick and agile creatures that seem to flit about without any effort at all.

The beauty of dragonflies has long been depicted in ancient cultures and folklore. In recent years, they have become especially common as tattoos, often used to express power, transformation, and self-realization. Below, we outline the history and symbolism of dragonflies, along with what tattoo design options are out there.

Fun fact: Dragonflies are master fliers. They can move at an astonishing 45 mph in any direction with much fewer wing flaps than other insects like mosquitoes or flies.

What Do Dragonflies Symbolize?

Dragonflies are strongly associated with change, but they also have an array of other powerful symbolisms that are worth noting.

The most recognized symbol of a dragonfly is that of transformation. These delicate insects first grow in water and then take to the skies, which is why they represent change, spiritual growth, and metamorphosis. Dragonflies’ expert flying also makes them synonymous with power and poise.

Due to the dragonfly’s remarkable flight patterns, this insect is also linked with adaptability. Not only can it effortlessly change direction, but it does so with incredible lightness and swiftness. It is this ability to quickly move that inspires its connection to flexibility.

Another symbolic meaning of the dragonfly is joy and lightness of being. One only needs to look at the grace and speed of a dragonfly to see how it flies weightless from one place to the next. Its frequent presence above the water also links it to emotions and the unconscious, representing the notion that one should remain light and joyful in even the darkest of times.

Living in the Moment

As dragonflies have a short lifespan, these creatures also exemplify the philosophy of living in the moment. They do most of their flying within a few months of their short life, which represents the virtue of living life to the fullest.

Dragonflies have 360-degree vision, which allows them to hunt in a swarm of insects without any collisions. This unlimited sight has become synonymous with self-understanding and seeing beyond the limitations of the self.

The meaning of dragonflies varies greatly across cultures. While some revere the dragonfly for its strength and good luck, others see them as carriers of dark magic. Below are some popular cultural meanings of dragonflies in folklore and legend.

Dragonflies hold special meaning in Japanese culture where it is revered as a symbol of good fortune, power, agility, and victory for the Samurai. Its association with good fortune stems from an ancient Japanese legend about a dragonfly that chases off an insect on the Emperor’s hand before it does any harm.

Japan is also known as ‘The Island of the Dragonfly’ because the shape of the country is said to resemble a dragonfly at rest. The Japanese also believe that dragonflies carry the spirits of the dead.

In China, dragonflies are believed to be the souls of dragons and therefore symbolize good luck, harmony, and prosperity. The Chinese also place dragonfly figures, statues, and artwork in Feng Shui practices, as they are believed to bring positive changes to an office or home.

In Native American cultures, the dragonfly signifies happiness, speed, and purity. Some Native American cultures even believe that dragonflies originated as dragons. This is based on folklore and legends that tell of a coyote tricking a dragon into shapeshifting, and how it was unable to change back. Dragonflies also appear in Navajo sand paintings, and they are common emblems in Zuni necklaces and pottery.

Other American legends believed that dragonflies were predictors of rainfall. If they flew high, heavy rainfall would ensue, whereas if they flew low, a light rain shower would follow.

Dragonflies in the United Kingdom

Dragonflies in England have a more negative connotation and are referred to as the “Devil’s darning needle” and as a “horse stinger.” The former name stems from ancient beliefs that the Devil had sent the dragonfly to earth to cause chaos and confusion.

Its latter name is due to a misinformed belief that dragonflies have a habit of stinging a horse’s legs. It has since become known that black flies are the perpetrator of these stings, but dragonflies were historically blamed due to their large size.

Dragonflies take on similarly dark meanings in Europe, often associated with the Devil or black magic. In Germany, for example, popular folk names for dragonflies include Teufelspferd (Devil’s horse) and Wasserhexe (Water witch). The former name is derived from a German legend where a vicious princess rides over a small man with her horse when he doesn’t get out of her way. The man subsequently curses the princess, which turns both her and the horse into a dragonfly.

Bulgaria has an equally dark tale about the Devil trying to cross a lake. When a fisherman refuses to give him a ride across the water, the Devil transforms himself into a winged insect. This became synonymous with dragonflies.

While dragonfly tattoos look great in an array of colors, black and grey versions are equally impactful. Removing the color draws the eye more to the shape and detail of the insect. Black and grey designs are especially great for highlighting the details of a dragonfly’s wings.

Conversely, colorful dragonfly tattoos can create a different mood entirely. Whether you’re using bright colors for the wings or the entire insect, you can go big and bold or stick to more subtle shades. Other color options include shading the outer area of the dragonfly or incorporating colorful patterns or elements alongside it.

If you’re after something more exotic, tribal dragonfly tattoos make impressive designs. Tribal designs often stray from traditional formats, sometimes creating unique lines and shapes for the wings. While tribal designs are typically black and grey, you can also add color to create more impact. This design is a good way to portray the more mystical side of a dragonfly.

If you’re keen to represent the dragonfly’s power and poise, geometric designs are a good option, especially as triangles are associated with strength and purpose. Geometric patterns can be used for the outer shape and the wings, or the dragonfly can be set inside a series of circles or triangles.

Nature-inspired designs are great ways to celebrate the joy and lightness of a dragonfly by incorporating flowers, leaves, or even other insects. These designs are often colorful, vibrant, and they look great with traditional dragonfly shapes.

If you want to express the symbolism of transformation and change in your dragonfly, surreal designs are an excellent way to get creative and suspend reality! Some good examples depict dragonflies as separated elements, or they are designed in a slightly abstract way.

If you’re after a dragonfly tattoo without a lot of complexity, opting for a simple outline or one without shading is a great way to go. Simple designs can also feature the dragonfly on its own without any additional patterns, shapes, or objects.

Large dragonfly tattoos allow you to go big and bold, especially in locations with a lot of surface area, such as the back. If you’re opting for a large dragonfly, consider creating unusual or striking patterns in the wings or creating a scene that includes water, leaves, or blossoms.

Getting a Dragonfly Tattoo

Dragonfly tattoos can be inked and designed in a variety of ways. However, before you take the leap, it’s a good idea to research what styles and colors you’d like. While you might simply be interested in the aesthetics of a dragonfly, there is a lot to consider when it comes to how you want to portray this delicate creature.

For example, are you interested in a dragonfly tattoo as a way to express big changes in your life? Or do you want it as an emblem of power and strength? Whatever your reasons might be, considering the meanings of dragonflies and how it relates to your life will help you select the best design for you.

Lastly, it’s worth spending some time with your tattoo artist to see what kind of designs they can offer. View as many options as you can so that you’re certain you’ll be happy with the final product. Have fun!