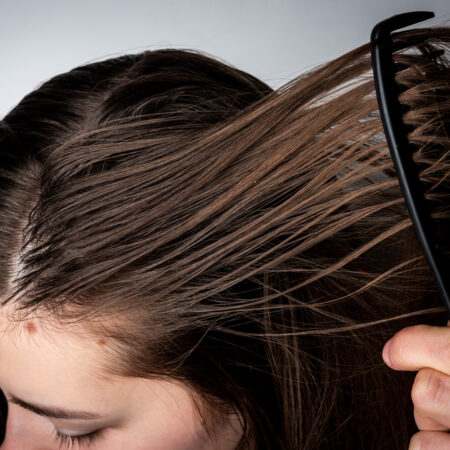 On paper, the idea of a coconut oil hair treatment sounds wonderful. Making your hair shinier, thicker, and healthier using an all-natural product that everyone from your auntie to beauty bloggers seem to recommend — what could go wrong?

As it turns out, there is one thing. Coconut oil is hard to get out of your hair. We’re talking “I-washed-my-hair-three-times-in-one-day-and-it-still-won’t-come-out” hard.

But I’m not here to rub salt into the wound. If you’re reading this, you probably know this unfortunate side effect all too well. Maybe you’re sitting on your bathroom floor crying right now.

Don’t worry — getting that grease out isn’t too hard once you know what to do. Here’s a breakdown of the top methods out there, from store-bought clarifying shampoos to clever DIY tricks.

Generally, people think that getting coconut oil out of their hair with shampoo might be impossible. They try shampooing their tresses but end up with hair that looks just as dirty as it did pre-shower.

But don’t rule out shampoos altogether — they’re not all made equal.

Clarifying shampoos contain more and stronger surfactants than “regular” shampoos. In plain English, surfactants are the ingredients that lather up and cleanse our hair. The most common example is sodium laureth sulfate (SLS).

Although standard shampoos do a great job of cleaning everyday dirt and grease out of hair, they’re too gentle to wash out the more potent stuff. That’s where clarifying shampoos come in, which are designed to remove build-up from more stubborn items, including hair products.

This makes them a great candidate for removing coconut oil.

How to Use Clarifying Shampoo to Remove Coconut Oil

If you know how to wash your hair with a regular shampoo, you’ll be an old hand at washing it with clarifying shampoo. The two processes are practically the same.

However, take some care to select the right shampoo for the job. Make sure the product you choose is labeled as “clarifying” and that it contains a high percentage of surfactants (at least 12%).

If you’re in any doubt, you can usually tell clarifying shampoos apart from the rest by their appearance. They tend to be liquid-based and translucent rather than thick and creamy.

When it comes to the wash, make sure you really take the time to massage the shampoo into your scalp before washing it out. You might even want to repeat this process twice.

But bear in mind that you should only use clarifying shampoos once a week to give your hair a “deep clean.” Using them more often could result in damage to your hair.

If you still have some oil in your hair after using a clarifying shampoo, move on to a different method.

Most people would assume that if shampoo is unsuccessful at getting coconut oil out of your hair, dry shampoo won’t be much better.

What they don’t realize? Dry shampoo and shampoo don’t actually have that much in common (beyond their names).

While regular shampoo washes dirt and other buildup out of the hair using surfactants, dry shampoo actually absorbs the grease — usually with ingredients like alcohols and starches.

You’re probably wondering, doesn’t this mean that you’re just absorbing the coconut oil rather than getting rid of it?

Technically, yes. But once the dry shampoo has absorbed the grease for you, it’s easier to remove it — so grab a bottle and give it a go.

How to Use Dry Shampoo to Remove Coconut Oil

If you have an aerosol dry shampoo, spray a generous amount onto your scalp. Or, if you have a powder version, get around a tablespoon of the stuff and sprinkle it around the roots.

Don’t worry too much about the ends or strands of your hair. Oil is most stubborn around the roots, and the dry shampoo will travel down your hair as you brush it out anyway.

Once you’ve nicely coated the top of your head, comb through your hair slowly until you get the coconut oil out.

With any luck, this should restore your hair to its former glory — but you might need to wash it before you know for sure!

However, there is a caveat. Dry shampoo won’t make a great long-term solution if you plan to regularly apply and remove coconut oil from your hair. It can actually damage the hair since it contains so many harsh ingredients.

Of course, it’s fine as a one-off. 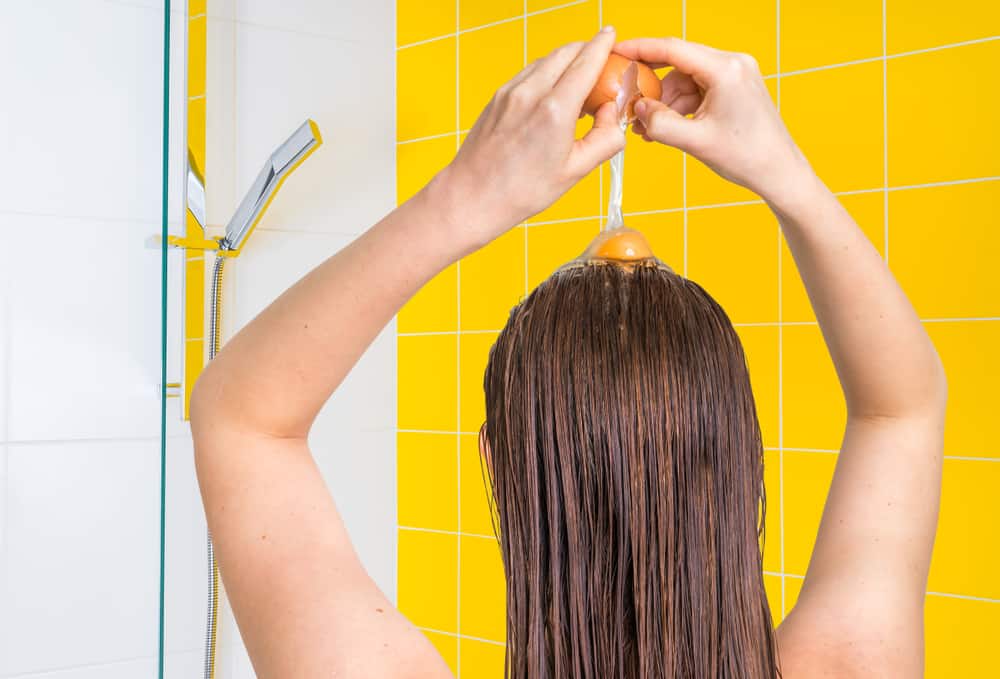 Until now, we’ve stayed firmly within the realm of the normal. Now, it’s time to take a train into the land of the bizarre.

Exhibit A: using an egg to do the job.

It might sound crazy, but eggs are actually a long-running haircare solution, thanks to their ability to absorb grease and oils. As a bonus, they’re protein-rich and contain many vitamins and minerals, so they may end up helping your hair just as much as the coconut oil — or even more!

This method has a lot going for it. Eggs are a pretty affordable ingredient, and they’re also completely natural (duh). But maybe you’re a vegan, or you just really don’t like eggs. In that case, feel free to move swiftly on.

Still here? Great. Now we can get into the (not-so) grizzly details.

How to Use an Egg Wash to Remove Coconut Oil

To make your egg wash, beat two or three eggs into a bowl and mix them with four cups of water using a fork or whisk.

The resulting yellow mixture might not look particularly appealing, but don’t let that put you off. It’s good stuff, I promise!

Massage the mixture into your hair and leave it in for five to ten minutes before washing it out with lukewarm water. Hot water is a bad idea at the best of times since it could damage your hair, but it’s a disaster when eggs are involved. It can start to cook them, causing a mess!

For an added touch, you could use castile soap to help wash any remaining coconut oil (and egg) out of the hair.

Vinegar is a popular go-to for just about anything in the natural beauty world. Kind of like, well, coconut oil. Too soon? Moving swiftly on.

Since it’s so acidic, vinegar does a great job of cleansing and balancing our hair’s pH.

But a word of warning: don’t get overexcited and just pour the whole bottle over your head. Vinegar is strong stuff, and can do some real damage to your hair if you’re not careful! Dilute, dilute, dilute.

Besides, you really don’t want to get it in your eyes…

How to Use Vinegar to Remove Coconut Oil

Which type of vinegar is best for the job? I’d recommend apple cider vinegar or white vinegar as a first choice, but if you have other types of vinegar lying around, they’ll get the job done too.

As mentioned, a key aspect to getting this process right is to make sure you dilute the vinegar with enough water. Two to three tablespoons of vinegar and a cup of water should be about the balance you’re aiming for here.

Then, once you’ve created your mixture, pour the mixture over your head and massage it into your scalp slowly.

After leaving the solution in your hair for around ten minutes, wash out your hair using lukewarm water.

If you can’t stand the smell of vinegar or you’re opposed to the stuff for some other reason, the good news is that there’s an alternative that has most of the same properties. Lemon.

This acidic fruit makes the perfect coconut oil cleanser thanks to its high concentration of citric acid, which effectively loosens up the oil in your hair. After all, lemon is a common ingredient in cleaning products.

How to Use Lemon Water to Remove Coconut Oil

The simplest way to use lemon water as a hair cleanser is simply to squeeze the juice from two lemons and mix them with two cups of water.

Some people also like to add a few tablespoons of honey. You might be worried that the honey will end up getting stuck in your hair instead of the coconut oil, but don’t be — it will help to clean your hair, and it might even make it look nicer.

Oh, and if you don’t have any lemons in, yes — you can use limes instead.

Once you have your mixture, just pour it onto your hair, massage it in, and leave it to do its magic for around ten minutes. 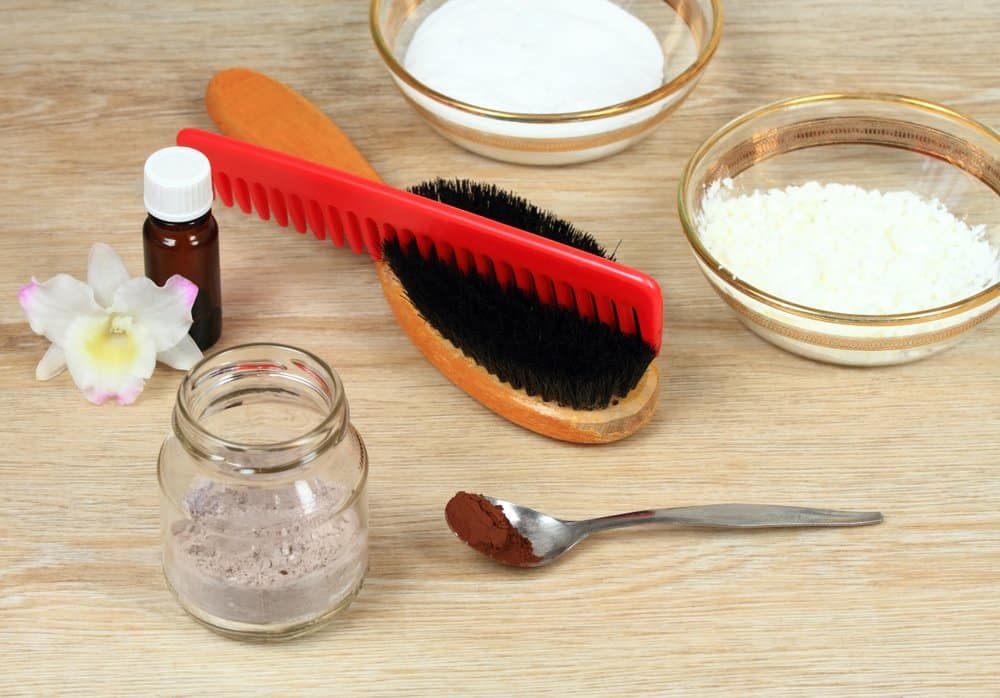 For most people, using baking soda to get coconut oil out of your hair isn’t going to sound like the best option. It’s not exactly known as a beauty hack — the clue’s in the name, it’s for cooking.

But if you’ve already tried your best, strongest shampoo — and numerous other alternative solutions — to no avail, it might be your saving grace.

There’s some solid science behind the use of baking soda: it will react and form a bond with the coconut oil, making it easier to wash out. Why not give it a go?

How to Use Baking Soda to Remove Coconut Oil

Like most of the other methods on this list, you can make your oil-removing solution with baking soda by mixing it with some water. This time, mix two tablespoons of baking soda and a small amount of water.

You’re aiming to create a paste-like substance, so don’t go overboard with the water — you need it to have a thick consistency to work properly.

You can then apply the mixture generously to your scalp and leave it for a few minutes before washing it out with lukewarm water. Sounding familiar yet?

You’ve probably heard aloe vera recommended as a solution to just about any health- or beauty-related ailment.

There’s a reason for that. Aloe vera is packed full of antioxidants, vitamins, minerals, and more — all of which help to clean dirt and oil from our hair. It’s certainly one of Mother Nature’s miracle ingredients, so it shouldn’t come as a surprise that it also helps with rinsing out your coconut oil.

You’ll be pleased to hear that this is one of the simplest methods on the list.

How to Use Aloe Vera to Remove Coconut Oil

For this method to work, you’ll need to use aloe vera in its gel form.

Simply take a teaspoon of your aloe vera gel and mix it in with your normal shampoo — it doesn’t even have to be a special clarifying shampoo (in fact, it’s better to opt for something more gentle).

I’d recommend transferring however much shampoo you usually use into a cup or something similar and adding the aloe vera gel that way (instead of using your usual bottle).

Then, it’s back to the usual jazz. Leave the solution in for around ten minutes before washing it out!

After going to such extreme lengths to get coconut oil out of your hair, you’re probably not in a rush to go and put it back in.

Luckily, there are plenty of alternatives that are far easier to rinse out.

Here are a few other recommendations for natural treatments that will make your hair shiny and strong:

Alternatively, you could opt for a keratin treatment — a method for adding shine to frizzy hair using chemicals.

Say Goodbye to the Grease

See — just because your usual shampoo doesn’t manage to wash out coconut oil in a few washes, it doesn’t mean that all hope is lost.

There are plenty of solutions that do a much more thorough job of cleansing your scalp, and the best part is that you probably have a few of them lying around your house already.

But use this mistake as a learning experience. Next time, go for coconut-oil-infused shampoo instead, and leave the pure oil for the people with too much time on their hands.