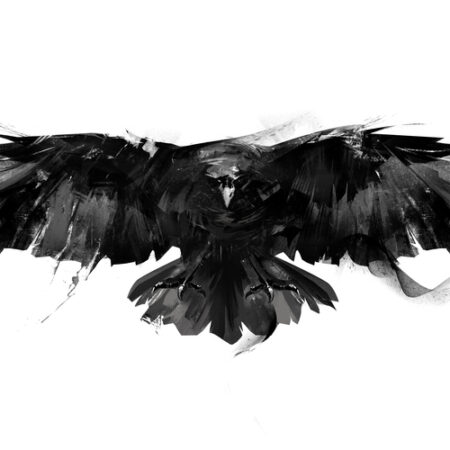 The raven is a powerful figure in art. The large black bird, which is often depicted alone, draws up images of foreboding and strength. Today, it is most associated with the poem by Edgar Allen Poe, which tells the tale of a lonely man haunted by its presence.

Long before Poe, however, the raven played a major role in art and mythology around the world, as servants of gods, prophets and tricksters, and harbingers of doom. It is no surprise, then, that we often turn to such majestic creatures for our own body art.

To find the right raven image and properly express what we wish, it’s good to know a little about this interesting bird and what it has come to mean to us.

The Bird Is the Word

The raven is a species of large black birds that are found all over the world. They are omnivorous and willing to eat carrion, which sometimes means they are associated with death. While young ravens may flock together, they are more likely to be seen either alone or with their partner, with whom they mate for life.

Ravens are particularly intelligent creatures, with recent studies showing them as having the ability to understand numbers, solve puzzles, and communicate as well as orangutans and chimpanzees. Perhaps it is through our continued experience of these clever birds that we have come to see them as intelligent and powerful creatures.

The names are confusing. Scientifically speaking, the “crow” usually refers to the “American crow,” which is a cousin of the raven. However, in English, the two words are often used synonymously. This means that while the common raven is a different animal from the American crow, in culture and mythology, they are considered the same.

The Servants of the Gods, or Gods Themselves?

Ancient mythology around the world has held a special place for the raven. According to the stories of Ancient Greece, the raven was the messenger of Apollo, its wings blackened when he punished them for bringing bad news. In Judaic mythology, it was the raven that first checked to see if the floodwaters receded, and it was ravens that fed the prophet, Elijah, while in exile.

The Hindu deity Shani rides on top of a raven, while the indigenous people in the far east of modern-day Russia revere the raven spirit Kutkh. In the mythology of the people of the Pacific Northwest, the raven is the creator of the world and ‘Trickster God.’

Perhaps the most well-known mythological ravens are Hugin and Munin. In Norse Mythology, these two birds brought the news of the world to the All-Father, Odin. They were so important to him that in some texts, he is known as “The Raven God.” To see a raven was to know that Odin was watching, and to see one after a sacrifice or battle was to see that he was pleased. Images of two ravens are often connected with these important figures, representing knowledge and wisdom, as well as protection.

Note: It is important to do your research if considering a traditional raven symbol from Norse mythology. In modern times, some such symbols have been co-opted by hate groups, just as the Swastika was by the Nazis. Instead, consider offering up images of Hugin and Munin using your own interpretations.

Harbingers of Doom or Protectors From It?

While many stories refer to the raven as a messenger, even more see the raven as a protector. In Irish mythology, the great soldier Cu’Chulainn was protected by the goddess Morrigan who sat on his shoulder as a raven as he passed to the next world. In Roman mythology, the real-life general Marcus Valerius Maximus Corvus was saved during a fight by a raven intervening and distracting his opponent.

The mythology of ravens as protectors continues to this day. According to legend, the Kingdom of England would fall if the ravens were removed from the Tower of London. This legend is so important to London that, when the original ravens left during WW2, the city replaced them with new birds, their wings now clipped.

Because of their powerful symbolism as protectors, tattoo enthusiasts often place a raven “on their shoulder” or across their shoulder blades, as a symbol of their own desire to protect others.

The most famous reference today would have to be Edgar Allan Poe’s “The Raven,” a narrative poem about a man haunted by the memory of lost love, while tormented by a raven sitting on his doorway, repeating over and over again, “Nevermore.” In the poem, the raven is described as “stately” and “with mien of lord or lady” (“mein” being another word for “demeanor”). Even as a haunting figure, it is a royal one.

Poe’s raven is often tattooed along with the word “Nevermore” as a tribute to a passed loved one, not so much haunting as not wanting to be forgotten.

Placement of a Raven Tattoo

Large raven tattoos are commonly placed on the upper arm or shoulder blade, while some prefer a raven to spread its wings across their back or chest. For those looking for a smaller tattoo, popular choices are a raven sitting on a branch that wraps around the wrist or sitting just above the ankle.

Ravens make great additions to existing tattoos and can be “perched” on a range of other images like rose stems, skulls, gravestones, and crosses. A clever way to add text with a raven tattoo is to have them holding a scroll.

Make the Raven Your Own

The raven has had many meanings over the years, from protector to messenger to trickster god. Do not be afraid to bring your own meaning to the intelligent and majestic bird. A tattoo is a reflection of the person it is on, and creating individual meanings and symbols is part of the creative process.

Using a raven symbol doesn’t need to offer realism, either. Artists have long used geometric shapes, like sets of triangles, to represent the mystical animal. Finding new ways to present the image is something we encourage. Tattoo artists can also show a range of designs to provide inspiration or help you create your own.