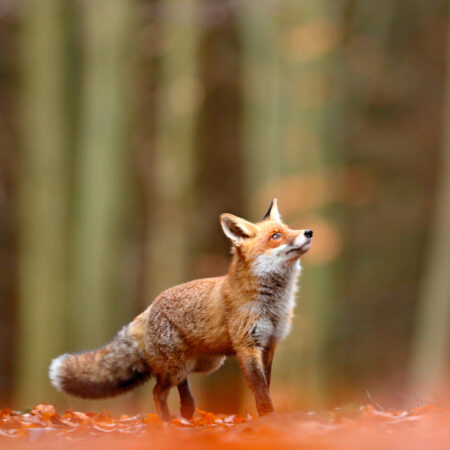 Foxes are beautiful nocturnal creatures most known for their slyness and trickster personalities. With bushy tails and colorful coats of fur, these animals are famed for their attractiveness and their ability to adapt in the wild. As members of the dog family, foxes are cunning omnivores that can survive on virtually any kind of food. Foxes are also notorious hunters that can quickly avert danger and hide undetected.

Myths and legends about these magnificent animals are abundant in cultures all over the world. While they primarily symbolize shrewdness and trickery, they also represent loyalty, wisdom, and love. Foxes, therefore, make fantastic tattoo designs, not only because of their attractive appearance but because of what they signify. Ranging from elegant to mischievous, fox tattoos can be designed in a variety of ways to suit all manner of tastes.

This article provides information on the symbolism and history of foxes, as well as examples of different types of fox tattoo designs.

What Do Foxes Symbolize?

Foxes live on every continent in the world (except Antarctica), and they typically reside in forests, grasslands, mountains, and deserts. Their global presence throughout history has therefore made them a popular feature in ancient folklore and myth. Below are a few of the most common themes associated with these beautiful creatures.

The fox is commonly seen as symbolic of a trickster. As dwellers of the night, these creatures are known for their ability to think quickly and strategically. Not only can they outwit their predators, but foxes are tricksters because they can hide easily while finding ways around complicated situations.

Foxes also symbolize cleverness and the ability to succeed through deception. In some cultures, they serve as teachers that guide one to see beyond the veil. This characteristic relates to their roles as tricksters as foxes can not only see in the dark but can also find their way around nearly any obstacle.

The fox’s ability to adapt often makes it an animal synonymous with wisdom. Foxes are adept at surviving and finding new ways to adjust to changing circumstances, which makes them resourceful and highly intelligent.

Foxes have long been associated with beauty, sexuality, and fertility. In the West, for example, the term ‘fox’ is often used to denote female attractiveness. Fox tails are also symbolic of fertility, especially in Japanese cultures.

Fun facts: foxes are the only species in the dog family that can retract their claws as cats do. They also have remarkable hearing and are able to hear a watch ticking from 40 yards away.

Tales about foxes abound in mythology and folklore across the world. While many cultures see foxes as devious, others consider these creatures in a more positive manner.

Fox mythology is prevalent in many countries around Europe. In the Middle Ages, foxes were associated with deceptive behavior and were sometimes burned as symbols of the Devil.

Perhaps most notable, though, is Reynard the Fox, a set of Medieval stories that appeared in Dutch, English, French, and German fables. Reynard was an anthropomorphic red fox that was depicted as a trickster who often deceived others for his own selfish gain.

Finnish mythology, however, casts the fox in a less negative light. While it is still associated with trickery, the fox in this culture is never evil, and is instead celebrated for its intelligence and ability to defeat malevolent forces. In Northern Finland, the fox is even said to conjure the aurora borealis while it treks through the snow. In fact, even today, the Finnish word for the aurora translates to ‘fox fires.’

Middle Eastern mythology carries slightly different connotations for the fox. In Mesopotamian mythology, for example, the fox is a sacred animal and acts as a messenger for Ninhursag, the Sumerian goddess of the mountains. In the Jewish tradition, fox fables are common and there are also several mentions of foxes in the Hebrew Bible.

In Greek mythology, the famous tale of the Teumessian Fox describes a giant fox that was known for evading capture. It was believed the fox was sent by Dionysus to prey upon the children of the city of Thebes, to punish the people for a crime they had committed. A giant dog with special powers was then sent in retaliation by Creon, the leader of Thebes, until Zeus intervened and turned both creatures into stone. These two animals then became the constellations known as Canis Major and Canis Minor.

Chinese, Japanese, and Korean folklore are rich in fox mythology. Foxes in these cultures generally represent powerful spirits that are cunning and mischievous, and who often take the female form and seduce men. Foxes in Japanese folklore are also historically seen as creatures that possess supernatural abilities and can shapeshift into human form. In Japanese Shinto traditions, the fox also helps people as part of its service to the deity, Inari. While foxes are still represented as tricksters in this culture, they are depicted positively as faithful guardians, friends, and lovers.

In Native American folklore, foxes are used as clan animals and are considered to be trickster companions to the coyote spirit. Some cultures consider the fox to be wise and benevolent, whereas others connect it to fire and the sun. In some cases, the fox has darker connotations and is considered a bad omen.

In ancient Peru, the Moche people revered the fox as a warrior that would use its intelligence in battle. Often depicted in Moche art, the fox was celebrated as an animal that needs only to use its mind to fight, rather than physical strength.

In African Dogon mythology, the pale fox is known for either symbolizing the God of Chaos or for being a messenger of the gods in general. Like the Japanese, the Dogons believed that the fox had supernatural powers and that they were teachers of sacred and esoteric knowledge.

If you know that a fox tattoo is for you, there are many ways to go about it. Below are some of the more common fox tattoo themes and designs to consider.

While foxes are known for their red or brown colors, a black and white fox is a great option, especially for men. The black and grey shades can symbolize a fox’s ability to see in the dark, and they look great in simple designs or with deep shading and dark lines.

If you’re keen on depicting the wise spirit of the fox, a clever fox design is a great idea. Whether it’s drawn solo to highlight its cunning features, or combined with other symbols that represent wisdom, opting for a clever fox design will appeal to those who want to express the intelligence of these animals.

Simple fox designs can come in a variety of forms. One option is to use very few lines and shading so that what remains is the outline. Other simple designs may feature a solitary fox or one that has unitary colors. While simple fox designs will work almost anywhere, they are particularly great for small areas like the finger, forearm, wrist, or ankle.

The fox’s notorious reputation for cunning and trickery is one that many want to represent when it comes to tattoos. This theme comes with a lot of options, but most notably, it is depicted through its expression. For instance, a forward-facing fox with a cheeky or devious expression is a great way to represent this animal’s trickster nature.

If aesthetics are what you’re after, a geometric fox can make a fantastic tattoo. A fox’s angular face makes it easy to create triangular shapes and unique, avant-garde designs. Examples include a simple geometric fox face or a full-bodied version with multiple colors.

The preoccupation with a fox’s trickster personality can make it easy to forget that they are also synonymous with sexuality and femininity. For women, especially, a pretty fox tattoo that represents feminine energy is also popular. These depictions often contain soft facial features with light colors.

For those more spiritually inclined, a cosmic fox is a good way to represent this creature’s mystical abilities. This can be portrayed in a variety of ways, such as including cosmic elements like stars or moons and using purples and dark blues.

As explored above, foxes are prominent in Japanese legends and myths. This makes them a popular design option for Japanese tattoo styles, which typically feature strong, vibrant colors and dark outlines. Examples of Japanese-inspired fox tattoos include designs across the back in a Yakuza-style layout or as an arm sleeve that uses oriental styles of drawing.

One of the more unique and unusual layouts is that of the watercolor fox. These designs are inked in a watercolor style, which can create beautiful, soft features. Some of these tattoos are also done in a watercolor-fill style, which means there are very few outlines. This allows the colors to remain the most prominent.

Getting a Fox Tattoo

The almighty fox can be represented in numerous ways. Before getting your tattoo, though, it’s a good idea to first establish what themes you’d like to represent.

For instance, are you interested in the fox’s cunning nature? Or are you keen to use the fox to express your femininity and creativity? Whether you’re aiming simply for aesthetics or for something that represents the symbols of fox mythology, it’s important to know how you want to portray this beautiful animal.

Deciding on the location of the tattoo is paramount, as it will dictate the size and scope of the design. Some people opt for small fox tattoos on the fingers, for example, while others have designs across the whole of their arm or chest.

Depending on what kind of fox you’d like, this animal suits both long and narrow parts of the body. In terms of the lower body, tattoos are common in areas like the thigh, ankle, foot, and calf. The thigh area is great for inking large designs that can include additional features; however, bear in mind that the tattoo won’t be as visible. Foot and ankle tattoos are also great for wrap-around fox designs, but it’s best to choose thinner, less complicated designs for these regions (to help avoid the risk of tattoo blowouts).

Common areas of the upper body for fox tattoos include the fingers, hands, forearms, shoulders, and back. Deciding where to put your tattoo depends on whether you want a full fox or just a few key elements such as the head or tail. If you opt for narrow fox designs, these go well on the forearm, back, and upper arm, whereas shorter designs would suit the shoulder.

Another thing to decide is the color and style of your fox tattoo. The good news is that foxes look great in vibrant colors or in black and white. However, many popular depictions stay true to a fox’s traditional red or brown colors. In fact, some of the more striking fox tattoos are inked in bright orange or red, with a focus on the big bushy tail.

Other options to consider are whether you want the fox to be solitary or combined with additional elements like plants, flowers, or other animals. There is also the option to zero-in on specific features of the fox as they can symbolize different things. For example, the eyes can represent trickery, the snout can mean curiosity, and the curved body can denote sexuality.

Whatever you decide, take some time with your tattoo artist to see what they can offer. View as many options as you can so that you’re certain you’ll be happy with the final product. Happy designing!