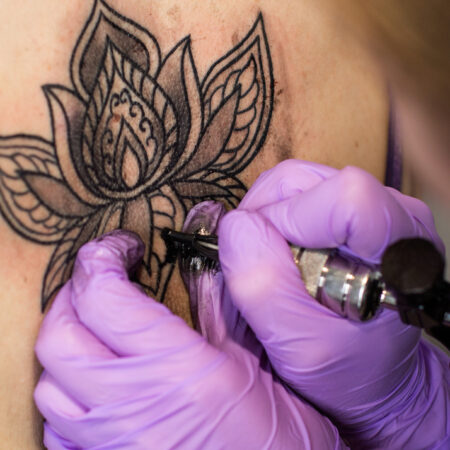 Lotus flowers are delicate yet robust flowers and are considered one of the most sacred plants in the world. Remarkably, the existence of lotus flowers dates back as far as 145 million years, meaning they survived even the Ice Age. Associated with eastern traditions like Buddhism and Hinduism, lotus flowers symbolize peace, purity, and enlightenment.

In recent years, lotus flower tattoos have become especially trendy as a way for people to express their spirituality and personal growth. While these tattoos are usually popular with women, they also make great designs for men. Below, we outline the history and symbolism of lotus flowers, along with what tattoo design options are out there.

What Do Lotus Flowers Symbolize?

Lotus flowers vary in terms of their symbolism and significance. This depends not only on their state of bloom but also on their color, which we cover below.

Famously coined as the ‘womb of the world,’ white lotuses symbolize fertility, faith, purity of mind, and wealth. White lotuses are also revered for their ability to stay white within dirty waters, a trait which has been likened to the ability to stay pure of heart, even in adverse conditions.

Like other red flower kin, the red lotus is an emblem of sympathy, compassion, and selfless love. Other symbols for the red lotus are heart, passion, generosity, and as a representation of Avalokiteshwara, the bodhisattva of compassion.

Yellow lotuses symbolize enlightenment and spiritual ascension. They are also associated with creativity, knowledge, confidence, clear thoughts, and decision-making. For this reason, yellow lotus flowers are recommended for periods of study or meditation.

Said to represent the Buddha himself, pink lotus flowers are deeply associated with Buddhism. They also hold varying meanings depending on the state of their buds. A pink lotus bud that hasn’t bloomed, for example, represents journeying on the spiritual path, whereas an open bud signifies enlightenment.

As one of the rarer colors, blue lotus flowers symbolize wisdom, knowledge, and the ability to conquer one’s emotions, aspirations, and senses. It is generally represented as a partially open bud, which is said to signify the embodiment of wisdom.

Purple lotus flowers are associated with mysticism and are usually represented as a bud or in bloom. The eighth petal on a purple lotus flower signifies the noble eightfold path, one of the main teachings of Buddhism.

While the general meaning of a lotus flower is similar across cultures, there are a few historical variances that are worth noting.

Lotus flowers have special significance in Buddhism, often representing purity, faithfulness, and enlightenment. Because these delicate flowers also grow in muddy waters, lotuses symbolize the ability to rise above physical challenges in the pursuit of wisdom and spirituality. More significantly, lotus flowers represent the spiritual journey, where one starts as a bud and then opens as they become enlightened. Therefore, lotus flowers can be represented as closed, partially open, or fully bloomed depending on the intended meaning.

Buddhists also regard the lotus flower as a symbol of non-attachment because it stays firmly rooted in the mud while growing above the water’s surface. The lotus is also depicted widely in art and scripture, with Buddha often seen seated upon a lotus leaf.

Like Buddhism, the lotus flower in Hinduism represents enlightenment, growth, purity, and birth. It also signifies one’s ability to perform their duties without being influenced by pleasure, desire, or gain. Hindu gods and goddesses are also associated with the lotus flower and are frequently depicted as sitting or standing on them.

The lotus flower in Hinduism is also revered for its ability to grow in muddied waters. Followers are encouraged to stand strong in their path towards spiritual enlightenment and to be undistracted by material temptations. Other meanings of the lotus flower are its associations with the Crown chakra, which is referred to as the ‘thousand petal lotus.’

Lotus flowers are also revered in the Christian tradition. Not only do they symbolize purity and the creation of the universe, but lotus flowers are also strongly associated with divinity. Lotuses in the Christian tradition are also respected for their ability to grow in dirty water and for the fact that their seeds can be resurrected after periods of inactivity. This has led to the lotus flower’s association with the resurrection of Jesus Christ.

A slightly different take on the lotus flower can be found in ancient Egypt, where it represents rebirth and the sun. Because lotuses close their petals at night and then re-emerge in the morning, these flowers also signify creation in the Egyptian tradition. This is likened to the sun as it rises and sets each day.

Another interesting representation of the lotus flower is death. For instance, The Book of the Dead — an ancient text that commemorates the dead —contains spells that can transform someone into a lotus flower. The lotus is also depicted quite widely in Egyptian hieroglyphs and is significant for uniting upper and lower Egypt.

If you’ve decided that a lotus tattoo is for you, there are many ways to go about it. Below are some of the more common lotus tattoo styles to consider.

Lotus flowers can suit both long and narrow parts of the body, which means they can be inked in a variety of regions. Common areas of the upper body for lotus flower tattoos include the fingers, hands, forearms, shoulders, and back. Deciding where to put your tattoo depends on the size and the style that you’re aiming for. For example, long, narrow designs will suit the forearm, back, and upper arm quite well, whereas smaller and shorter designs would go well on the shoulder.

Lower body lotus tattoos are common in places such as the thigh, ankle, foot, and calf. Thighs are great for inking large designs, but they won’t be as visible. Foot and ankle tattoos are a bit more delicate, so these regions are ideal for thinner, less complicated designs.

Sleeves have become increasingly popular forms of tattoos in recent years. Due to the large surface area, sleeve lotus tattoos provide a lot of options. Whether you opt for a simple or highly detailed piece, sleeves are a great opportunity to incorporate other design elements such as beads or even multiple lotus flowers.

Sleeve tattoos are also a great opportunity to complement a lotus flow with other floral designs. You can check out some of our favorite flower tattoo ideas here.

In terms of special designs, the mandala lotus is especially popular. Their geometric shapes allow for intricate detail and therefore make an attractive design. Symbolically, mandalas represent the universe and circle of life, which makes a mandala lotus a good choice if you’re spiritually inclined.

While lotus flowers on their own symbolize Buddhism in various forms, another popular version of this tattoo is to blend multiple images. Whether it’s Buddha’s head merged with a lotus, or Buddha sitting atop a flower, this tattoo can represent one’s spiritual journey.

Traditional Japanese tattoos often contain distinct, vibrant colors with dark outlines. This can make a lotus tattoo particularly striking, especially if you opt for colors like red or purple. The other bonus of this kind of style is that darker shades will often last longer.

For those looking for a simpler design, geometric lotus tattoos focus on the outlines of the flower. Rather than being inked with lots of shading, a geometric tattoo is usually a series of lines without any coloring inside them.

As mentioned earlier, colored lotus flowers represent different things. Depending on what representation you’re intending, going for a specific color can denote your interests or aspirations. A pink flower, for example, could signify your devotion to Buddhism. Alternatively, a red lotus could be an expression of love or passion.

Getting a Lotus Flower Tattoo

Lotus flowers can be inked and designed in a variety of different ways. However, it’s a good idea to research what styles and colors you’d like before you take the leap. Even if you’re interested in the lotus flower simply for aesthetic reasons, it’s worth considering the different meanings so that you can personalize the tattoo design to your taste.

The good news is that due to their symmetry and elegant design, lotus flowers are fairly easy to ink and will look good no matter what design you choose. You might also want to consider whether you’d like the flower to be closed, partially open, or fully in bloom.

Whatever you decide, it’s worth spending some time with your tattoo artist to see what kind of designs they can offer. View as many options as you can so that you’re certain you’ll be happy with the final product. Have fun designing!