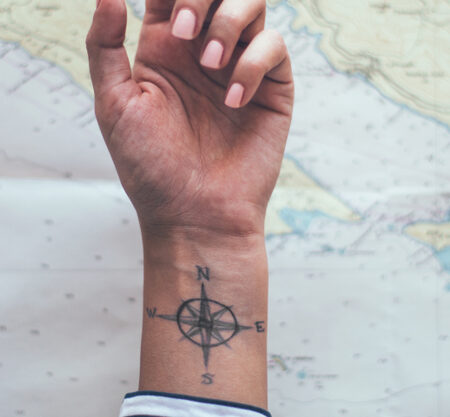 “Not all those who wander are lost,” as they say. This quote from a J.R.R. Tolkien poem is often featured on T-shirts or posters, alongside a compass, and for good reason. Compasses have been used for centuries to guide travelers back home or to a new destination.

While the modern GPS has now rendered traditional compasses all but useless for practical navigation, compasses still hold a lot of symbolic value. Many people have them as a tattoo to remember where they’re going, where they came from, or someone special. No two compass tattoo meanings are the same, so let’s take a look at their possible meanings.

A Quick History of Compasses

Compasses have been around for so long that it’s unclear who originally invented them. It’s thought that China was the first to use magnetic compasses, though, and as early as the 11th century. Europeans joined them at the end of the 12th century.

Compasses use magnets to function. Magnets have a north pole and a south pole. Since the earth is magnetic, the north pole of a magnet will always point north. There are some issues with the accuracy of magnetic compasses, however, because the North Pole, which we call true north, isn’t the same as the earth’s actual north pole, which is located in Canada. Yes, this does mean that if you’re far enough north, the needle could end up pointing south!

Despite the flaw, compasses are known to be a reliable navigation tool that we can trust to lead us in the right direction. They’re how our ancestors traveled and settled and how GPS systems came to be.

Compasses have several different ideas and cultural meanings attached to them, although most of them are tied to traveling and direction.

In the days of yore, adventurers such as Marco Polo, Ferdinand Magellan, and many others packed their ships and headed out to sea with a map and compass. These explorers required confidence, independence, and enthusiasm to discover new parts of the world.

Today, a compass can remind someone to muster up the courage to go forth toward new adventures. A new driver, a graduate student, or someone embarking on a new nomadic lifestyle to travel the world may like a compass tattoo to remind them that the world is theirs to explore, so they should step out with their head held high to see it.

Since the needle always points north, a compass provides a sense of safety and comfort as it guides you to your destination. When was the last time you traveled without a GPS? Many of us refuse to travel to a new place without one because it assures us we won’t get lost. Some may see a compass and feel safe since it serves as a symbol of trustworthy guidance.

The only reason you’d use a compass is to find your way to a new place. You can’t travel without motivation to get where you’re going, whether it was a long time ago on a ship or today in a sedan.

The needle pointing north may serve as a symbol to keep on trucking since it theoretically always points in a forward direction.

In some spiritual practices, north, south, east, and west refer to infinite time, the present, the future, and the past, respectively. A compass can serve as a display of our time on earth and that we should make the most of it.

There are many zodiac meanings tied to each of the four directions on the compass for both Chinese and astrological zodiacs.

Native American tribes also have meanings associated with each direction. Wisdom is the north, spirit is the east, purity is the south, and the west symbolizes conclusions. The meanings of the directions can vary between tribes.

Celtic traditions tied meanings to each of the four directions, as well. The earth is north, air is east, fire is south, and west is water.

Compass Symbolism With Other Images

Compasses can hold different meanings based on the other objects they’re paired with. Most of these pairings create overt nautical themes, but the imagery serves as powerful reminders.

Anchors go hand-in-hand with compasses since they were used together on ships all throughout history. When paired together, an anchor and a compass can serve as a reminder to hold steady or “keep it together.”

Arrows point you in the correct direction, as do compasses. Naturally, they’re used together to keep you on track. A compass makes for a wonderful small wrist tattoo idea, and a compass with an arrow on your arm or wrist can serve as a reminder to keep moving ahead despite any obstacles that may obstruct your path.

A clock and a compass together can serve as a big reminder that we have limited time in our lives to get where we’re going. While for some, this imagery may be interpreted as daunting and spur a temporary existential crisis, for others, it can serve as an encouraging reminder to stay focused.

The hourglass has the same meaning as the clock, although it may be a more pressing reminder that inspires a bit of panic. Clocks go around and around, implying that time goes on. The hourglass, on the other hand, has a finite amount of sand that will eventually run out. It’s a dark metaphor for life, but it’s an amazing reminder.

Travelers will appreciate the message sent with a compass and map since it depicts adventure and exploration. These two together can have meanings that suggest that this big world is meant to be explored, or that we should never confine ourselves to one small part of the world. It may also have a motivational meaning such as “you’ll find your way.”

When you think of a ship or a ship wheel, you may picture a huge wooden boat on treacherous waters in the rain. Or maybe you think of Captain Jack Sparrow. Either way, the captain of said ship must stay focused to keep on the right course. Ship wheels and compasses are reminders of perseverance and determination, perfect for people who have difficult parts of life they must get through.

The meanings mentioned are broad, but tattoos are incredibly personal, and you can attach whatever meaning you’d like to a compass tattoo. Here are some personal reasons you might be interested in getting a compass tattoo. 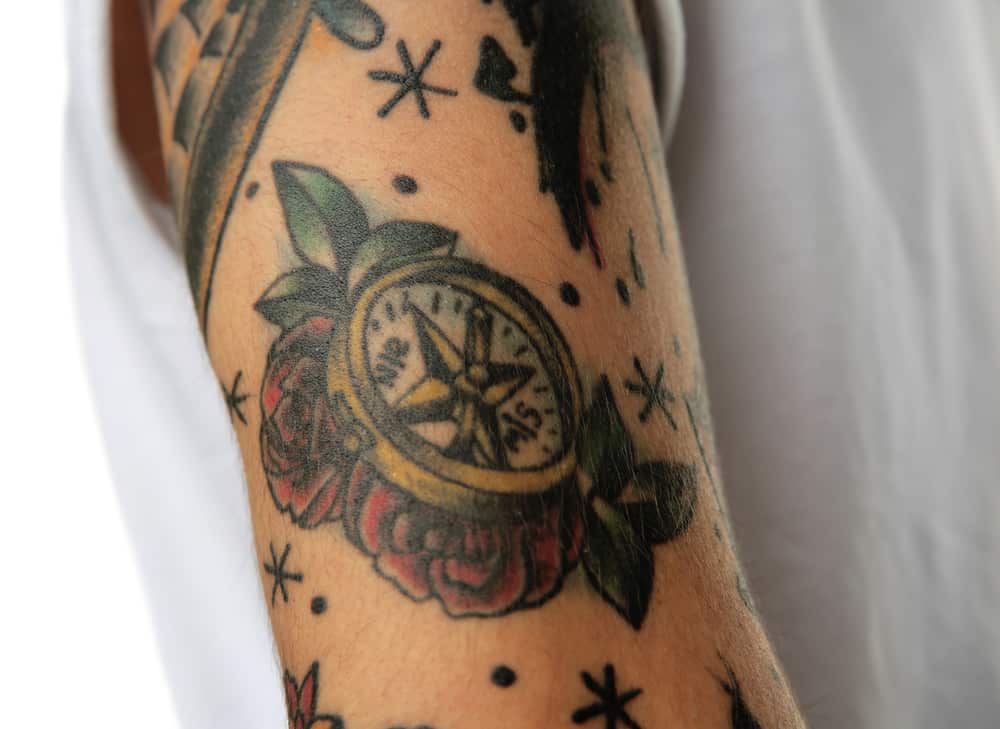 Remind Yourself of Your Goal

Goals are essentially destinations, and compasses are usually associated with arriving at the destination. If you have a goal you’re trying to reach, but it’s taking too long and proving to be too complicated, a compass tattoo will likely serve as a reminder to keep going. Once you’ve reached your goal, you’ll have a memory of all the hard work you’ve done.

Pairing the compass with a ship wheel will symbolize perseverance.

Mark of a New Beginning

Life takes us down many paths – some of them are welcome, and others, not so much. When you take a turn and head onto a new road in life, a compass can be a good commemorative tattoo to signify that change in direction. Newlyweds, college grads, or someone who just moved to a new country might enjoy having a compass tattoo to mark the start of their new journey.

If you feel like you’ve taken a turn in the wrong direction, adding an anchor to the tattoo can help you stay steady.

We can’t always take our loved ones with us in life. A compass with their name or the name of your hometown will be a lovely reminder of where you came from. Put a map to the compass to remember your roots.

Many people like to have a reminder of their moral compass to keep them steady. During tough situations where it’s difficult to make the right decisions, a compass can serve as a reminder to keep doing the right thing. Pairing it with religious symbols can remind you to make faith-based or spiritual decisions.

Display Your Love of Travel

We live in the age of tiny homes and minimalism – many young people are getting rid of their stuff so they can travel light and see the world. If you have a nomadic spirit and love to explore, a compass tattoo is a great way to show off the life you love living.

A Tattoo in the Right Direction

Compass tattoos are an excellent way to show others and yourself what’s important to you. Whether it’s your moral compass, a compass that points back home, or one that encourages you to move forward, the tattoo can serve as a comforting motivator when you need it the most.