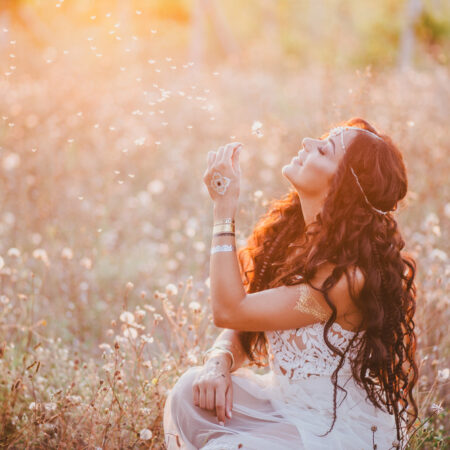 “Never trust a guy with a dandelion tattoo,” they say. Don’t worry, I just made that one up — but if you’re thinking about getting a dandelion tattoo yourself, you probably want to make sure that you’re not unwittingly flagging yourself up as a person of questionable morals.

A tattoo will stay with you forever — finding the right design isn’t a task to take lightly. You want something that looks great but also has a deeper meaning behind it. Everyone goes about this process differently, but one approach is to find a design you like first and worry about the meaning after. That’s totally valid!

Or maybe someone close to you has a dandelion tattoo, and you’re dying to know what it really means without having to ask them. You do you.

Whatever the case, I’ve got answers. Keep reading to find out the symbolism behind dandelions themselves and the meanings of popular dandelion tattoo designs.

The Meaning and Symbolism of Dandelions

Most adults walk past dandelions regularly without ever giving them a second thought. After all, they’re not exactly the most exciting or exotic flower (or technically, weed) for most of us.

But the history and symbolism associated with this flower might surprise you.

The Most Popular Dandelion Tattoo Meanings

Like most popular symbols, there are countless potential interpretations attached to the flower, depending on who you ask.

Some of the most popular meanings include:

I’ll take a deeper dive into a few of these themes later, when I examine specific designs.

For instance, freedom is closely related to blowing dandelions, while white dandelions can symbolize innocence.

However, the two themes that have the most substantial historical association with the dandelion are hope/luck and healing/strength. Let’s take a look at these two concepts in greater detail.

Dandelions Tattoos as a Symbol of Hope and Luck

You might remember being told as a child that you can make a wish by blowing a dandelion and scattering the seeds. So, it shouldn’t come as a surprise that dandelions are associated with hope and luck.

But where did this idea come from in the first place?

One explanation is that it dates back to Ancient Greece, when the dandelion was the flower of Hecate, the chief goddess of spells. Clearly, Hecate had a strong association with fate and magic. Could this be why we use dandelions to will our desired outcomes into being, hoping to draw on the goddess’ magic?

According to one folktale, when a child finds a dandelion, the stalk’s length predicts various measures — such as how tall they will grow, how many children they will have, and how long they will live.

It might not be scientifically proven, but it’s hard not to find this tale intriguing!

Dandelions Tattoos as a Symbol of Healing and Strength

But magic and hope aren’t the only possible meaning that dandelions hold.

Back in the medieval era, peasants believed dandelions had immense healing powers.

This might seem surprising to us now, but the flowers can be both a food source and medicine. They’ve historically been used to cure everything from acne to digestive disorders and got many people through dire situations a few centuries back.

In fact, the Latin name for the dandelion is the taraxacum officinale, translated as “the official remedy for disorders.” Far from being pesky weeds, dandelions are actually closely linked to healing, wellness, and life.

Dandelions are also notable for their impressive ability to grow in challenging conditions and their strong roots — they’re a stubborn weed to get rid of. Bad for gardeners, good for symbolizing strength.

Dandelion Tattoos as Your Own Personal Symbol

Of course, remember that these meanings are just a guide. Interpretation is always subjective. Whether you want your dandelion tattoo to represent good luck in life or resilience — or a more personal meaning you’ve drawn on through your own experiences — it can do.

For some people, dandelions are a reminder of childhood or bring back memories of a relative who used to place them around the house as decorations. That’s fine too!

Types of Dandelion Tattoos and Their Meanings

Analyzing imagery and symbolism is a task of extreme precision — depending on the exact type of dandelion chosen and the way the tattoo artist draws it, the design could have a completely different meaning.

Again, this isn’t an exact science. Depending on how the individual chooses to interpret a design, the meaning can become quite different.

For the most accurate analysis of a design possible, I recommend speaking to your tattoo artist (or a friend who is really into symbolism).

Still, if all you want is a rough idea of the most common ways to interpret a tattoo, I’ve got you covered. The most popular dandelion designs out there are listed below, along with the symbolism attached to them. 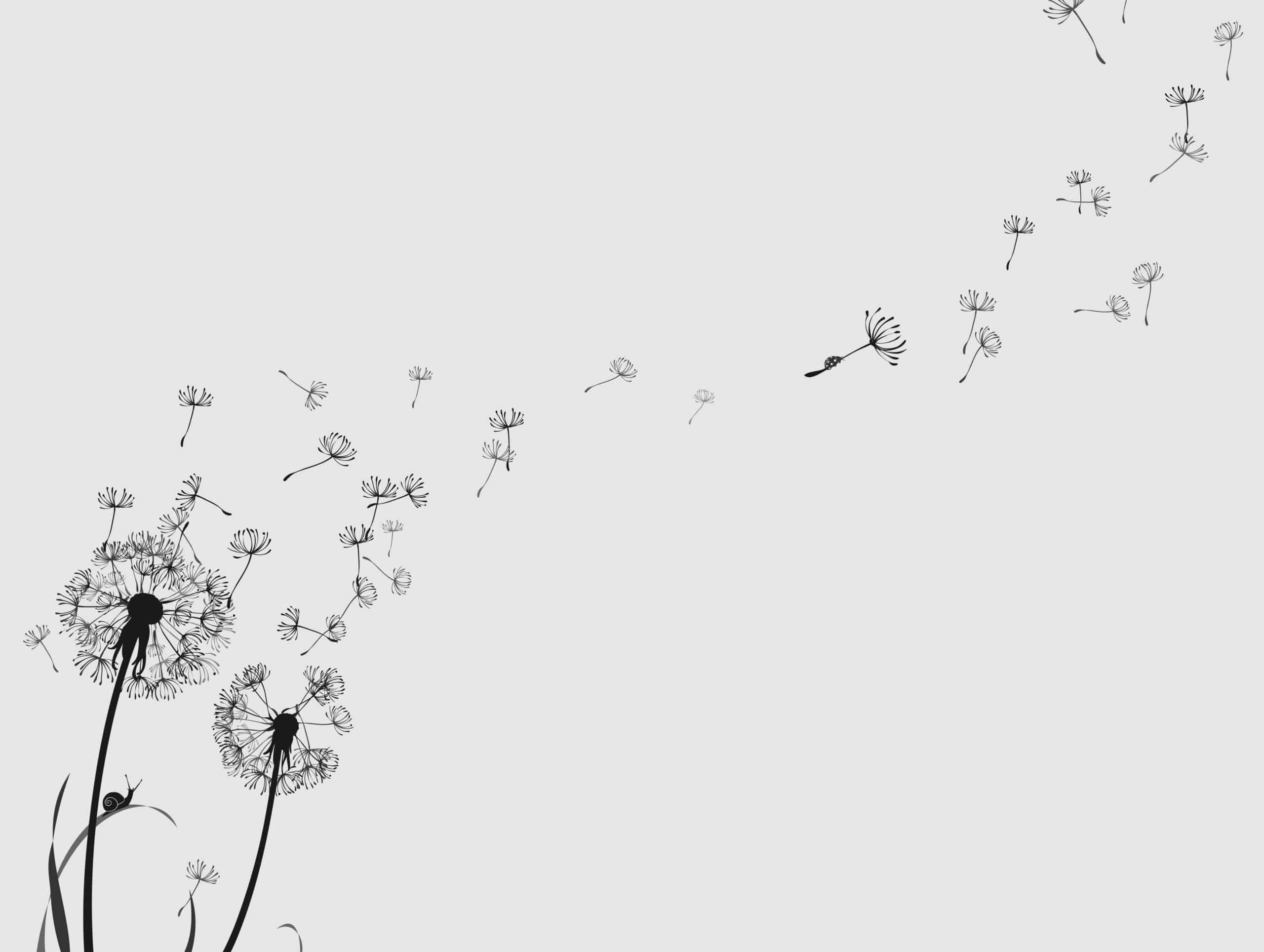 The most popular type of dandelion tattoo is the dandelion that looks like it’s just been blown, with the seeds scattering off into the world.

We blow dandelions to make a wish, so it shouldn’t come as a surprise that this design’s meaning relates to dreaming and obtaining freedom.

Since these tattoos almost always portray the seeds floating upward, it represents ascension — the seeds are escaping the dandelion and entering the universe independently.

Therefore, this could be a meaningful tattoo to get when entering a new stage in life (like moving to a new city) or escaping a difficult situation (such as an unhappy marriage).

Alternatively, some view a dandelion blowing as being about letting go of somebody who is no longer in your life. It could be a nice way to commemorate a loved one who has passed away, with the seeds of the dandelion representing their ashes scattering around the world. 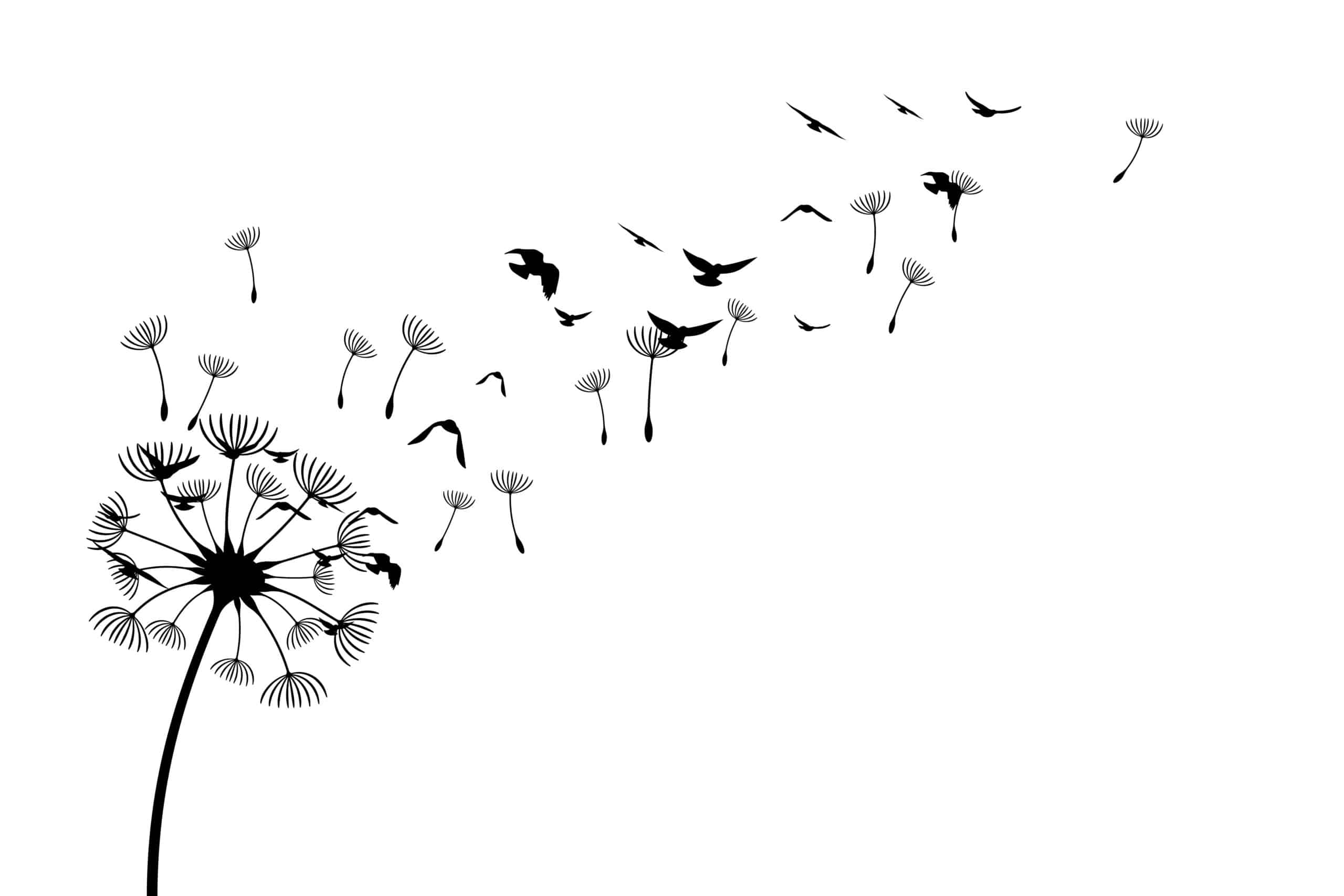 Dandelion seeds that turn into a flock of birds (such as the design shown in the picture above) are another popular tattoo — you’ve most likely seen a few photos of them floating around the internet.

And with such a specific design, you’re probably thinking that it has a precise meaning. You won’t be disappointed.

Like the blowing dandelion tattoos, the tattoos of dandelion seeds turning into birds are about freedom and dreams. But this time, the meaning is even stronger — it’s about freeing yourself from your “cage” and finally “taking flight,” just like a bird would.

Since the designs are so similar, the one you choose will primarily come down to personal preference. 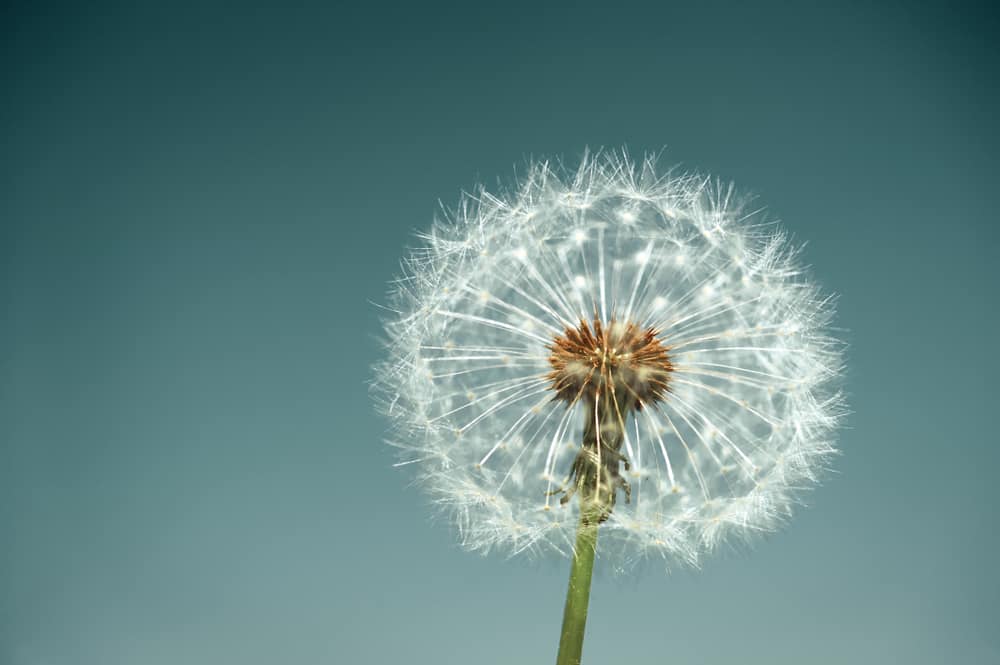 Most dandelion tattoos show the dandelion as a black silhouette, especially since most tattoos are done in black. But tattoos can also feature colors, including white. You might like the idea of displaying the dandelion with white thistles, to make it look more flowerlike.

These designs usually feature a dandelion with its seeds still intact, instead of showing them blowing off into the distance. This implies a different meaning.

Instead of the dandelion representing freedom, a complete and colored dandelion is more about hope and potential. Perhaps you’re hopeful for a bright future, but don’t yet feel ready to spread your wings and seek out freedom.

Since white symbolizes purity, a white dandelion tattoo can also represent innocence — a good tattoo for anyone who has had children or wants to remember their own childhood. 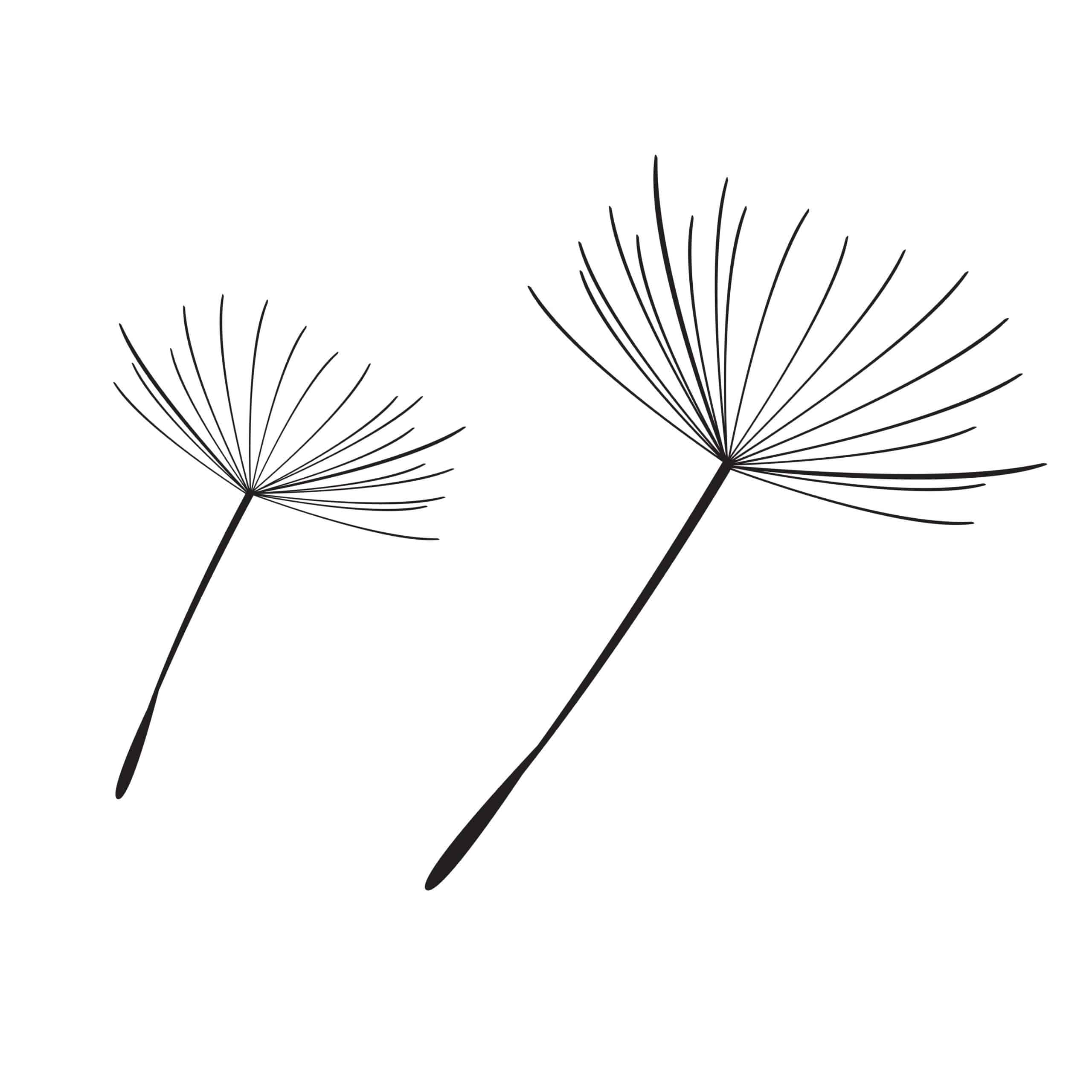 Bare dandelions, also known as “puffs,” are what’s left of the flower after all the seeds have gone. This might seem like a sad or strange design to opt for at first, but looked at a different way, they could actually represent resilience.

It’s a great representation that you’ve already let go of the past.

If you feel like you’ve finally shed fears, doubt, or pain and you’re still standing, a bare dandelion could be the perfect tattoo for this point in your life.

Time to Ink Up

Whatever drew you to the humble dandelion initially, you should now appreciate the various meanings this design can have — not to mention the potency of the flower itself.

Maybe you came here looking for a cool tattoo, and you’ve left wondering if you should start to experiment with cooking the dandelion in your backyard!

Whether you want a tattoo as a symbol of childhood innocence, starting afresh in life, or love for someone you’ve lost, you can find a design or type of dandelion tattoo to represent that.

One thing is for certain: if you decide to get a dandelion tattoo and somebody asks you what the meaning behind it is, you’ll now have a good answer prepared. You’re welcome!