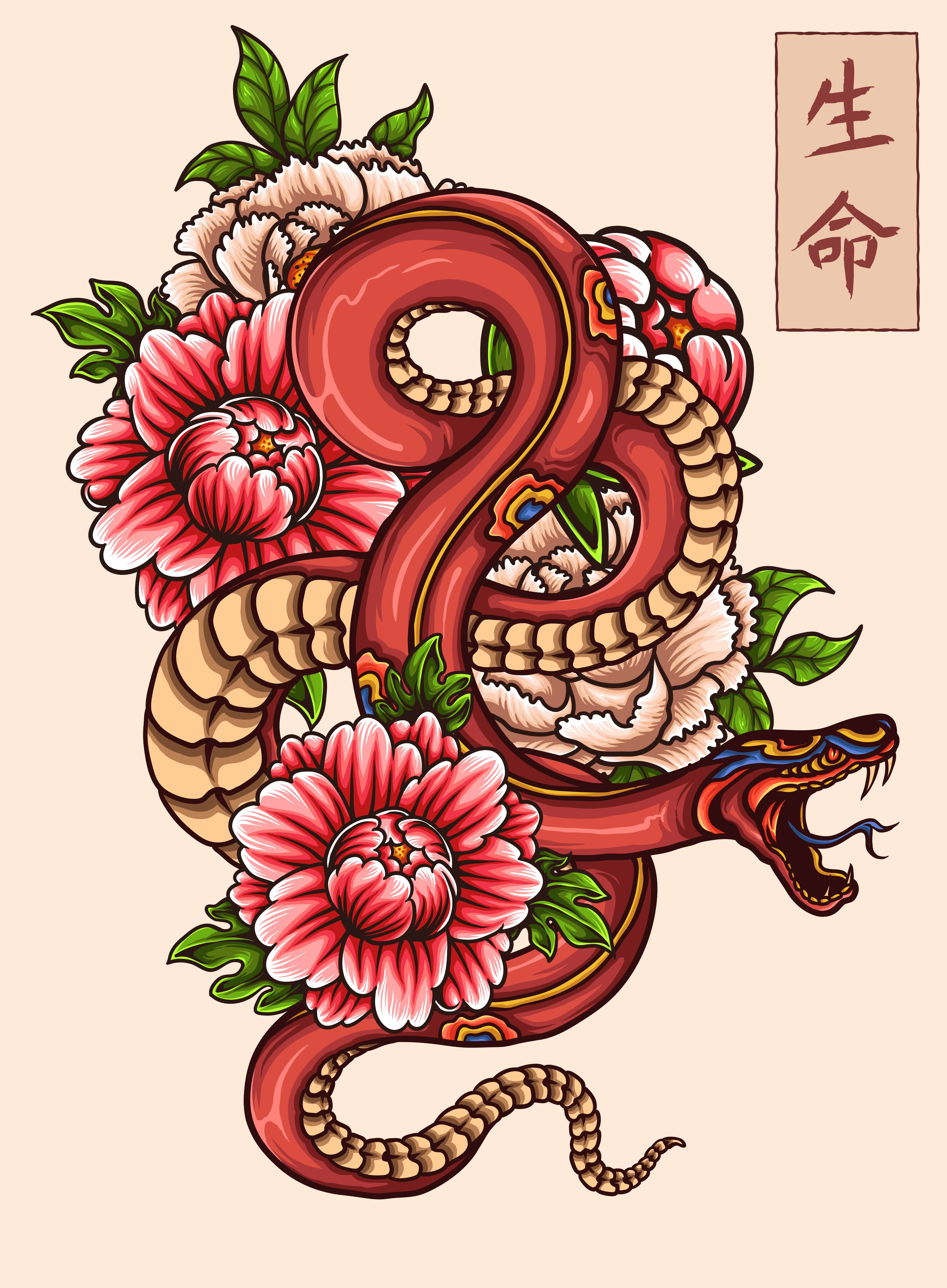 Serpents and snakes carry heavy symbolism all over the world. A snake tattoo can have many different meanings depending on where you live, what your religion is, among many other factors. The type of snake will also paint a different image in people’s minds.

Snake tattoos are appropriate for both men and women, and it’s easy to evoke different emotions from a snake tattoo based on the design. The typical designs are fairly universal, and you can always customize a snake tattoo to your preference.

This article will take a look at different snake tattoo meanings for different people. If you’re thinking of getting a snake tattoo, you might want to see whether any of these meanings resound with you. Although you don’t need a reason to get a tattoo, being able to associate the tattoo with an emotion, an experience, or a belief can be very powerful.

Snakes are prominently showcased in many cultures and mythologies. It might be because of how unique they look or because they’re rather powerful animals. Different cultures have different interpretations, so your snake tattoo meaning could also vary depending on where you’re from, where you were born, or where you’re currently residing. Some people may even dig deep into their cultural roots. Here are some examples of the use of snake imagery across different cultures and mythologies.

Since ancient Egypt, Egyptians have seen snakes as symbols for eternity. They stand for the unending and eternal cycle of life, death, and reincarnation. In fact, you’ll often find Ouroboros in beautiful ancient Egyptian art, hung at museums, or showcased in history books. This is a snake that is eating its own tail to create a circular pattern and is meant to symbolize rebirth.

Many Japanese believe that snakes are symbols of good luck. These animals are often guardians of riches, treasures, and wealth, which is why snakes are often tattooed alongside imagery of riches. Having a snake tattooed on your body is believed to help bring you some luck and riches as well. These riches don’t always have to symbolize money; it could be antiques, knowledge, and more.

Much like for the Egyptians, snakes can also symbolize rebirth and transformation in this culture. It all depends on the design of the tattoo and what the snake is tattooed with.

If you’re a fan of ancient Greek mythology, you’ll find snake symbols everywhere. After all, almost everyone has heard of the famed Medusa, the woman with snakes for hair who was able to turn men into stone with just one gaze.

One of the most interesting interpretations of a snake tattoo meaning comes from the ancient Greek world. Snakes were associated with Asclepios, who is the ancient Greek God of medicine. The snake was believed to possess benevolent properties and able to cure all ailments just by touching the individual affected. On a similar note, snakes can also symbolize the sciences, with a strong emphasis on toxicology and toxinology. 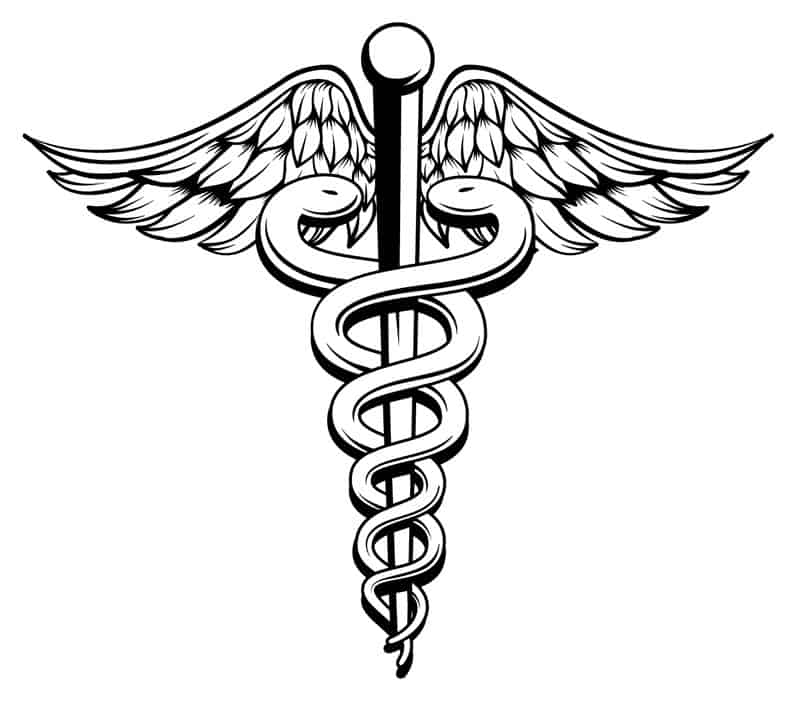 In China, snakes are often signs of grace, wisdom, wit, mystery, and divination. The snake can also symbolize a person’s birth year based on their horoscope. For example, those who were born in 1941, 1953, 1965, 1977, 1989, 2001, or 2013 are born in the year of the snake. A snake tattoo may simply refer to their birth year and identity. These snake tattoo designs can range from menacing-looking ones to cute cartoon designs.

Different religions also have different snake tattoo meanings. These meanings are usually derived from how snakes have been depicted in ancient literature and scripture. Different religious scriptures from the same religion may even have a different view of snakes, so it really depends on how you personally interpret it. With that said, here are some of the meanings behind some of the most common symbols of snakes found in various religions.

Perhaps, one of the most vivid images that many people think of when they try to conjure up a snake in their mind is the snake in the Garden of Eden. Satan disguises himself as a serpent in order to instigate Eve into breaking God’s command. Based on this, snakes are often used to represent temptation, the devil, sin, and deceit. Snakes can also be used to represent danger and risk.

Some Christians also see snakes as a symbol of reproduction due to their sleek, phallic shape. A snake tattoo meaning can also include fertility. The snake tattoo meaning, in this case, really depends on the snake design, whether it looks menacing or docile.

Snakes are often mentioned in Buddhism sutras. They were protectors of Buddha and are known for their cunningness and strength. In Buddhism, cobras are Buddha’s protectors. Naga is a multi-headed king cobra deity that’s prominently mentioned in many sutras and scriptures. He plays many important roles in granting people their wishes and helping them. Some people even worship this deity to this day.

In Islam, snakes have many different meanings. Black snakes and pythons are often used to represent power and military, while water snakes represent money. Trees that are covered with snakes are believed to bear fruit and can symbolize prosperity. Killing a snake can symbolize destroying an enemy.

The Different Types of Snake

The type of snake that you choose for your tattoo could also come with many different meanings. Choosing a cobra means a completely different thing than choosing a python! The difference is usually associated with the snake’s venom, aggression, and overall look. Some snakes, like vipers, simply have a more aggressive stance than others.

Cobras are one of the most well-known poisonous snakes. They have hollow fangs that emerge from the top of their mouths and trademark hoods that extend out from the most rostral region of their neck ribs. You can have a lot of fun with the design and change how the hood looks. These snakes also look quite exotic and are many people’s favorite.

Pythons, like Burmese pythons, are one of the largest snakes in the world, with a length that can reach over 23 feet. These monstrous creatures are often used to symbolize sheer power and strength. A lot of bodybuilders may want to get a python tattooed on them if building muscles and gaining power and strength is an important part of their life.

Pythons are also popular snakes used in tattoo designs because they have naturally beautiful patterning. They also look a lot less venomous and aggressive than vipers. Their strength instead lies in their body mass and size.

In some areas of Africa, pythons are considered sacred. These beautiful creatures are revered and killing a python is illegal. In fact, it may be that a python tattoo is considered sacrilegious in these communities.

Vipers are known for their large jaws, which they unhinge to get a big bite out of their prey and to inject their venom. Vipers are mainly used to symbolize danger, poison and even betrayal. Some people will get tattoos of vipers to represent a negative event that made a huge impact on their life.

Some people also see vipers as their protectors. They’re vicious enough to take a bite out of your enemies and can be a great ally to have by your side.

The modern world has really mixed a lot of traditional cultural meaning and pop culture usage together, creating new meanings for a snake tattoo. Some other common interpretations of a snake tattoo that were not included on our list include:

Naturally, some people may also believe snakes to have different meanings. For example, snakes may be referenced in your favorite love song. If that’s the case, it’s not unusual for snakes to represent love or even happiness to you.

Depending on how you incorporate the snake into the overall tattoo design, a snake tattoo meaning can vary. For example, snake tattoos surrounded by flowers will have a much more submissive feel than a snake crawling over a skull or a knife.

The snake tattoo meaning also depends on your own beliefs as well. If you’ve had an incredible experience with a snake, you’ll likely associate your own personal meaning to the tattoo, even if it doesn’t fit in with anything on this list, and that’s okay! At the end of the day, as long as you’re happy with your tattoo, that’s all that matters.