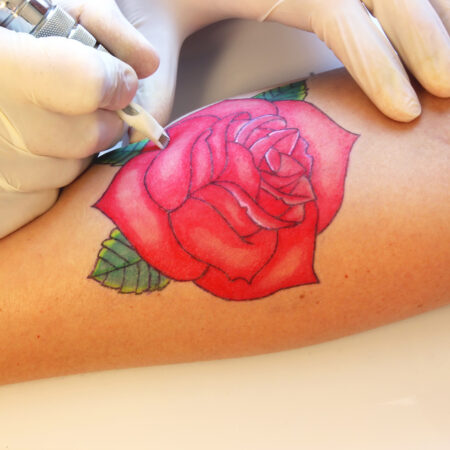 A symbol of love and beauty for millennia, the rose is a popular image for paintings, literature, and, yes, tattoos. From the single red rose of the valentine to the bouquet of black roses on a headstone, the flower represents a passionate love beyond what people feel for ordinary friends.

However, this humble flower can also represent much more than we imagine, from the crimson reminder of blood to the prickly thorns hiding just underneath the soft petals. When did we become so obsessed with the rose, and why is it so powerful an image today?

A Symbol of Love

The history of the rose as a symbol of love is one that has been in European literature for thousands of years. Homer’s “The Iliad” has Aphrodite, the goddess of love, protecting the body of Hector with rose oil and Achilles wearing a shield decorated with roses in the first documented instance of the flowers appearing in literature. Soon after, Greek writer Pausanias claimed that red roses received their color when Aphrodite pricked herself on their thorns. Long before these written instances, rose petals were found decorating ancient Egyptian tombs, placed there by loved ones.

In Japan, the Hanakotoba (or “language of flowers”) also recognizes the rose as a symbol of love, an example of the way this meaning is universally understood and appreciated.

A Symbol of Life

Roses, like many flowers, also represent life, in their ability to beautifully bloom after every harsh winter, bringing color to each new spring. In China, “the eternal spring flower” is used to represent longevity. White roses are popular today in wedding celebrations as a symbol of a long life together and black roses are found on many gravestones as a reminder of a lost life mourned. We further explore the meanings behind different rose colors in a later section.

A Symbol of Rebellion

While rarely the first thing we think of, the rose has been used for centuries as a symbol of fighting against authority, and for standing up for what is right. After all, isn’t passionate love just that?

From the “White Rose” resistance movement in Nazi Germany to the red rosettes of the French Revolution, the rose has been seen as a way to indicate that you have a great passion for what you believe in, and are willing to stand apart from others to fight for this belief. The “Tudor Rose” of England is now often used to represent how two sides who believed they were right ended up coming together for the good of their country.

A Symbol of Mystery

Perhaps it is the dangerous thorns hidden underneath, or the way the buds bloom open to reveal so much, but the rose has always been surrounded by mystery. It represents both love and mystery in its religious use by both Christians and Islamic mystics, while the masonic Rosucrucians still use the symbol today to represent the “hidden knowledge.” The rose was also used in Ancient Egypt as a symbol of “the hidden mysteries.”

Even today, the rose is used as a symbol of mystery and secrets, with governments and board meetings often being held “sub-rosa” or “under the rose.” These meetings are considered off-the-record, informal, and unrecorded.

The Meaning Behind Different Rose Colors

We traditionally think of roses as red, and it is this redness that brings us to think of matters of the heart. However, roses come in a range of colors, each with unique meanings.

Yellow roses are traditionally connected closely with friendship, indicating an intimacy that isn’t romantic but just as important. They help provide warm memories and optimism for the future.

Blue Roses are associated with rarity and uniqueness and are less commonly connected with love. There is a mysteriousness to the blue rose, and it suggests something unobtainable or out of reach.

The image of the black rose is the image of mourning, but not necessarily in a negative way. Often, the image can be used as a way to say, “this part of my life is over.” As black and blue roses do not occur in nature, using their images also indicates an ability to create and to step “out of the box.”

Famous Roses in Literature and Culture

Many of us turn to our favorite books, movies, and songs to find inspiration for our tattoos. When it comes to roses, we cannot help but think of some very famous images, what they mean to the works they were in, and what they mean to us.

Beauty and the Beast

In Disney’s retelling of the tale “Beauty and the Beast,” the eponymous prince kept a rose carefully protected in a glass bowl, as it died slowly. As each petal dropped, he came closer to the point where he would remain a beast forever. The rose represented both the passing of time but also the hope that love would save him.

This popular image is a wonderful way to represent our hope, as well as recognizing how little time we have to enjoy our world and the people in it.

A similar image of a rose under a bowl appears in “The Little Prince.” This French novella by Antoine de Saint-Exupéry is the fourth-most translated work in the world. In the story, the little prince discovers a single rose on an otherwise barren planet, a rose both vain and vulnerable, which he protects. “My rose,” the prince says, “all on her own, is more important than all of you together, since she’s the one I’ve watered.”

The image of the protected rose, often combined with one of the many brilliant quotes, can be a powerful symbol for what we care about most, what we protect, and what we are responsible for.

As Alice makes her way to the Queen of Hearts, she comes across workers who have accidentally planted white roses. Now, to hide their mistake, they are painting them red. The scene is one of absurdity and is a great representation of how we often do silly things to make everything around us appear just right.

The half-painted rose makes a wonderful symbol for the beauty of imperfection.

Of course, perhaps the most famous use of the rose as a symbol is in the work of Shakespeare. The “emblem of a maid” that would, “by any other name, smell as sweet,” the rose is a symbol of innocent beauty, though never long-lasting, for “of their sweet deaths are sweetest odors made.”

Shakespearean roses remind us of the temporary nature of beauty, and how we need to grab every moment to love. Because of the nature of his plays, hiding a little reference in a picture of a rose can provide us with our own little mystery.

Pairing images of roses with short quotes is popular for many tattoos and, besides the above references, there are some other nice ones to consider:

The rose is a timeless image recognized around the world as a symbol of life and love. However, by looking at the subtle meanings we can add, we can create a tattoo that speaks volumes through a single, well-designed flower. The color, the shape, and even the thorns can offer messages for ourselves and others, while little details can connect us to our cultures, beliefs, and interests.

Places to Put a Rose Tattoo

A rose is a versatile image that can suit a range of areas and sizes. A bouquet running up your leg, complete with flowers and thorns, can make a striking statement of passion, while a small little bloom on the inside of your wrist may be a quiet reminder to love. With the ability to add long thorny stems, a range of vibrant colors, and additional symbols and words, the rose can make a central focus point of a large tattoo.

Roses also make nice additions to other central images, a garland framing the focal point or detail on a picture of a person. These subtle touches can add further meaning, enhancing the message of love in the expression of the piece.

A rose can be a striking central focus or a powerful little detail in a larger piece. But the added meaning it can give to an image means it is well worth considering adding a rose to your tattoos. Check out some amazing examples of how others have made this powerful symbol a part of their body art.