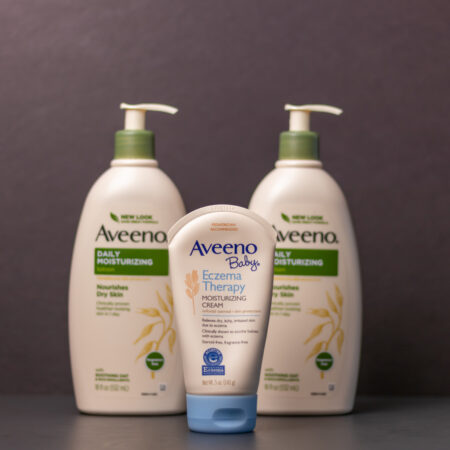 Aveeno has been around since 1945, and you’ve probably used one of their products at some point in your life. Afterall, it’s one of the top ten most popular skincare brands. They have a range of products from baby lotions to anti-aging creams that are readily available in department stores and drug stores.

Convenience and popularity are nice, but these days, consumers are thinking beyond that. Is Aveeno a cruelty-free brand today? Let’s take a look at the facts. (Here’s a hint: It’s not good news.)

Aveeno Is Not Cruelty-Free

Aveeno isn’t a cruelty-free brand, but it’s not the worst one you’ll find on the shelf. Still, if you’re avoiding companies that partake in any kind of animal testing, mark Aveeno off your list and look for something else.

According to Aveeno’s Animal Testing Policy, they say they don’t test on animals “…anywhere in the world, except in the rare situation where governments or laws require it.”

Their official statement is a little misleading since they claim that they don’t do it anywhere – except for when required. Perhaps “anywhere in the world” is supposed to soften the blow of the truth, or they’re trying to emphasize that it’s not their choice when they have to do it.

The U.S. Food & Drug Administration (FDA) does not require animal testing on products made and sold in the U.S., but it does allow it as an option for products to be tested for safety. With this in mind, we can assume that Aveeno doesn’t partake in animal testing in the States.

Aveeno has a bright future thanks to China’s new regulations on imported products. As of May 1, 2021, China no longer requires mandatory animal testing on certain imported cosmetic products. We talk about it in more detail below.

Not all products will be exempt, and not every country is easing up on their regulations, but it’s at least a step in the right direction.

Aveeno’s parent company is Johnson & Johnson, and they, too, aren’t cruelty-free. But like their child, they only test when required to do so.

On the Johnson & Johnson Commitment page, they say they don’t test on animals during the research and development of their products. They also mention that some countries require testing on products before they can be sold there, so it’s assumed they partake in that, although they don’t say it outright.

One Step Away From Cruelty-Free

We’re happy to see that Johnson & Johnson is trying to end cruel animal testing. But, there’s one thing that can’t be ignored that’s probably already crossed your mind: They could choose not to sell in countries that require testing.

From a financial standpoint, this would mean they would potentially lose a lot of profit from these countries. China alone has a population of over one billion, and several other countries require testing, too.

So, we’re left to assume that Johnson & Johnson and Aveeno would rather make money than refuse to partake in the animal cruelty industry. If this isn’t the case, they haven’t given consumers any reason to think otherwise.

The world is waking up to the idea of ending animal cruelty, and it’s exciting to see. As of May 1, 2021, China is no longer requiring imported “general cosmetics” to be tested on animals before they’re sold to the public.

What counts as “general” cosmetics? It’s basically anything a non-professional would use, such as lotion, eyeshadow, anti-aging creams, soaps, and so on. Imported “special-use” products such as hair dye will continue to be tested on animals.

Companies who want to sell general cosmetics in China will need proper documentation to avoid animal testing, such as a certificate and documentation of the required safety assessment.

What does this mean for Aveeno? Well, sunscreen, which Aveeno sells, is one of the products that count as special use. So, not all of Aveeno’s products are exempt from testing. At the very least, most of their products should still be classified as general use and won’t be tested on animals.

Many people choose Aveeno because it’s great for sensitive skin, whether it’s a baby’s soft skin or someone suffering from eczema. Fortunately, there are many great alternatives that are 100% cruelty-free and offer vegan and organic options.

Alba Botanica offers a wide array of products for the face, hair, and body. They offer products to treat acne, even out skin tone, provide moisture, and much more. They also offer several products outdoor enthusiasts will love, including insect repellent, sunscreen, and self-tanner. This company never tests on animals and doesn’t sell in countries that do.

If you’d like to try them out, consider their Hawaiian Oil-Free Moisturizer. It’s made from aloe vera and green tea and is a vegetarian product.

Derma E is a close comparison to Aveeno. They offer products for skin restoration, acne treatment, moisturizers, anti-aging, and much more. All of their products are cruelty-free, vegan, and don’t contain harsh ingredients like sulfates and phthalates.

If you’re reluctant to leave behind Aveeno’s moisturizing lotion, try Derma E’s Soothing Relief Lotion. It’s made with soothing ingredients, including green tea and Vitamin E and is perfect for itchy, dry skin. It’s gluten-free and GMO-free, so it’s safe for any kind of sensitive skin.

If you’re a parent who needs gentle products for your baby, try Earth Mama. Earth Mama provides cruelty-free products for babies and parents that are mostly organic. They offer products such as diaper balm, lotion, soap, and much more. Try the Calming Lavender Baby Lotion if your baby needs a moisturizer or has skin irritation.

Aveeno isn’t a cruelty-free brand because it’s sold in countries that require testing on imported cosmetics products. If you don’t want to support this brand, there are plenty of cruelty-free substitutions that never allow animal testing of any kind and don’t sell in countries that require it. Giving up a brand you’ve used for years can be tough, but there’s sure to be something you’ll love.