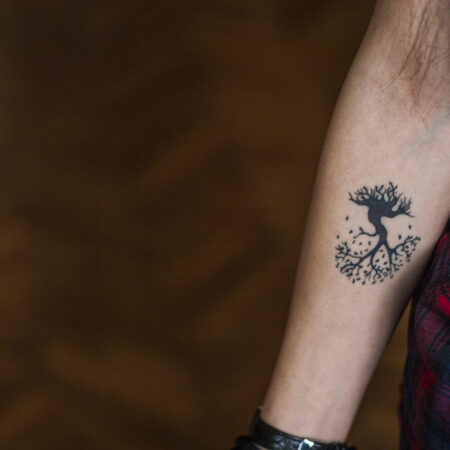 Trees have had important meanings to humans for as long as we’ve been roaming the earth. Some cultures worship them, and many people see them as a symbol for life. Trees are also responsible for much of the oxygen we breathe, which is why so many people advocate for saving them from deforestation.

Since trees play such an important role in humanity, it’s no wonder that people get them as tattoos. You might get one just because it looks cool, but trees are perfect tattoo choices when you want to attach something meaningful to your artwork, too. Let’s look at what trees mean throughout the world and what messages you can send if you have one as a tattoo.

Many cultures and religions have a significant tree in their histories and stories. Most of them speak of a tree of life, which in one way or another, ties all of life together. Egyptian mythology, for example, has a sycamore fig tree that fed the blessed. Christianity’s tree of life possessed the knowledge of good and evil. Jewish mysticism’s tree of life represents ten attributes that depict a map of creation.

Symbolic Meanings for Different Parts of the Tree

Every part of the tree has symbolic meaning, from the leaves down to the roots. If you’re considering a tree tattoo, consider these possible meanings before you choose a design.

Flowers are heavily associated with girls blossoming into women. Anyone can have a flower tattoo, of course, but keep in mind that the image has strong feminine connotations.

Branches have different meanings attached to them based on how they’re presented. If they have leaves on them, they might be considered a symbol of strength and connection since they hold the tree together. In family trees, branches represent family members, which adds to the symbolism of togetherness.

Bare branches, however, may appear vulnerable and uncertain. They no longer have the protection of leaves, and a tree without leaves always looks a little strange and eery, even if we’re used to seeing them bare every winter.

The tree trunk is responsible for holding up all the branches, leaves, and fruit, and so it often represents strength. Trunks also can also house animals and bugs, making them a reliable source of shelter.

Trees rely on roots to stay in the ground and receive nutrients. Without roots, the tree would die and blow over in the wind. As such, a tattoo that includes tree roots can be representative of grounding and stability.

Each tree species carries different meanings. These meanings aren’t always the same in every culture, but they’re quite broad and carry the same meaning to most people. The following is a list of common trees and their meanings:

Choosing a Theme for Your Tree Tattoo

As we’ve seen, there are a lot of different meanings attached to trees, whether it’s the species or individual leaves. Long-lived cultural meanings don’t necessarily mean anything when it comes to getting a tattoo, though – what matters most is your personal connection to the art you want on your body.

If you’re looking for some meaningful thematic ideas to inspire your tattoo design, here are a few of our favorites.

Many trees, like redwoods, can last for a thousand years or even longer. If you want a tattoo that symbolizes commitment, a redwood tree would be a great way to do so since they stick around for a long time. It could be a great way to commemorate a relationship with a family member or significant other,

Trees with large root systems that are firmly planted in the ground can endure almost anything. Many trees are able to withstand hurricanes and tornadoes, droughts, floods, and multiple generations of children climbing on them.

If you need a reminder to stand strong or resist temptation, a tattoo of a tree with a thick trunk or intricate root system can show that you’re grounded enough to withstand whatever is thrown in your direction.

Many people get discreet tattoos with personal significance attached to them, but we all know that tattoos are eye-catching and so they can be a great way to spread your message since people are naturally drawn to them.

If saving trees and ending deforestation is an endeavor that’s close to your heart, tree tattoos can draw attention or raise awareness.

“The family tree” and “tracing back to your roots” are tree-themed terms to explain how familial relationships work. Many kids in school undertake a family tree project at some point as it’s an easy way to visualize family history. A tree tattoo can be a great way to keep your loved ones with you even when you can’t be with them.

Unfortunately, lost loved ones or rocky relationships can be torturous to deal with. However, a tree tattoo can be a nice way to memorialize a loved one, especially if they’re a grandparent or parent who planted family roots in a new country.

As previously mentioned, many cultures and religions have a tree of life. Even outside of spiritual beliefs, trees are thought to represent life because the leaves are born and die each and every year like clockwork.

A tree tattoo can be an excellent reminder that life goes on even when everything around you feels uncertain. While the leaves die in the cold, they’ll always come back when it’s warm.

The Many Meanings of Tree Tattoos

Tree tattoos can have a lot of different meanings. Trees commonly represent life, strength, and endurance, so they serve as powerful statements when they’re used as tattoos.

Whatever meaning you choose to attach to your tree tattoo, remember that trees have always been valued by humanity, and they always will be.