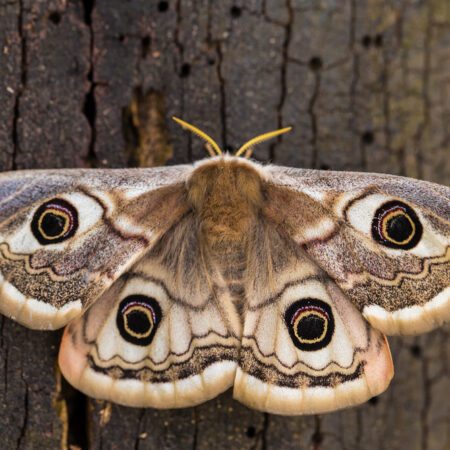 Tattoos are a big part of our culture, so much so that you may know more people who have tattoos than people who don’t. While some just enjoy awesome designs, for many, inking their bodies has a special meaning and each tattoo is chosen with care. Moth tattoos have been growing in popularity due to their symbolism.

This may seem surprising as one’s initial perception of a moth may be that of a drab, winged creature repeatedly flying into a lamp. This single-minded behavior even landed moths a place in meme culture. Though all of this may cause us to think moths are stupid, they actually have an important place in our ecosystem.

Once you learn more about moths and what they represent, you can appreciate why this “silly” insect has become a popular piece of permanent body art. You may even begin to want one for yourself (if you aren’t already interested)!

What Do Moths Symbolize?

Not only do moths make for bomb tattoos design-wise, but they also represent a number of different things. If you love tattoos that have meaning, then a moth may be perfect for you.

Moths have been around for a long time, nearly 200 million years. They are still abundant today, with about 160,000 species in existence (in comparison, there are only 17,500 species of butterflies).

This is because moths have been able to adapt and evolve as the world changed. An example of this happened during the industrial revolution. Trees became covered with soot, and moths that had salt and pepper coloring were nearly invisible upon them. These moths were better able to hide from predators and survived long enough to produce offspring.

Many people can connect with this idea of adaptation and evolution. We all face different challenges in our lives that require us to adapt and change. For this reason, the moth can be a symbol of overcoming hardship.

As we explained, there are around 160,000 species of moths in the world. This means that they come in all different shapes, sizes, colors, and patterns. Though many of us think of moths as dull and brown, there are a vast number of colored moths.

For example, the sunset moth is considered to be among one of the most beautiful in existence. This moth, like many others, can be seen during the day — proof of the fact that not all moths are active at night.

Therefore, moths can represent diversity. You may decide to get a moth tattoo because you believe in or support diversity of culture, religion, sexuality, or whatever it may be. Alternatively, you may connect with the symbolism of the moth if you come from a diverse cultural background that you’re proud of.

Moths come in many different shapes, sizes, and colors, but every single one is important to the health of an ecosystem.

Moths and butterflies are cousins (you can check out our butterfly tattoo article here), so it’s no surprise that moths also undergo metamorphosis. They, too, begin as caterpillars that crawl but emerge from their cocoons capable of flight.

This idea of growth and rebirth is one that many can relate to. For those that have already had life-changing experiences, a moth tattoo can honor that transformation. For others, it can serve as a reminder that the hardships of life can help us grow into someone more beautiful and capable than before.

Some may also connect the idea of rebirth to their spirituality, for many believe that our souls are reborn either in Heaven or into another life on earth. Therefore, a moth tattoo (often in tandem with a name) can be used to honor loved ones who have passed on to their next life.

Moths are moths, so of course, they don’t go to church every Sunday. Nor are they collecting crystals and leaving them outside to be charged by the sun. However, for some people, the moth can be a symbol of spirituality.

As we all know, moths are drawn to light in the dark. While this is a very real occurrence, the idea of the “light in the dark” is a common metaphor for hope and faith, especially in dire or bleak situations. It is in these situations that many look to a higher power for comfort and guidance.

And light is exactly that for moths, a guiding beacon. Scientists believe that moths use moonlight to help them navigate, and they call this “transverse orientation.” While it’s true that man-made lights may be throwing moths off, the symbolism behind searching for a light in the dark remains. 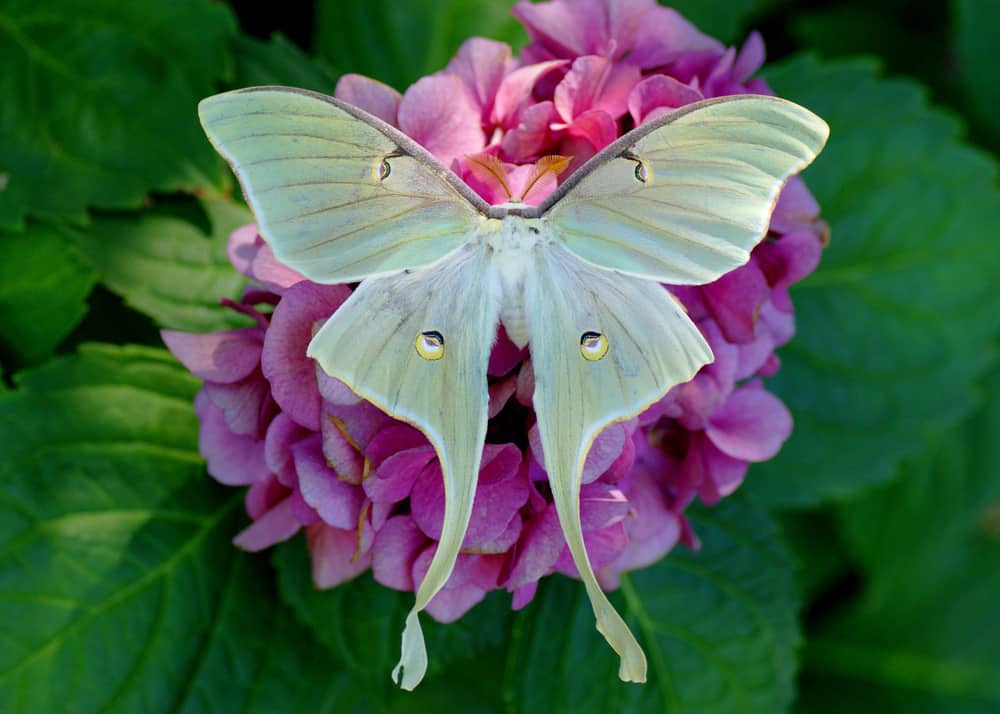 We can’t talk about spirituality without mentioning the luna moth. This is an especially popular moth for tattoos, particularly those that include moon phases or other moon imagery.

The luna moth is said to represent rebirth, regeneration, transformation, and renewal. Some cultures even believed that the luna moth was a physical manifestation of a person’s soul leaving their body after they died.

Because the luna moth is named after the moon and, like other moths, is guided by the moon, many connect it to this celestial body. In this way, it can represent femininity, intuition, and psychic perception.

Some even believe that this moth is a spirit guide, and seeing one is a message from a greater power. Since the luna moth represents renewal and rebirth, this message is believed to be an omen that it is time for you to open yourself to positive change, but that you will be protected as you do so.

Many people admire nature and pursue a connection with it. For them, this can even be a type of spirituality. The moth is the perfect symbol for this connection. It is governed by the moon and is believed to have been a part of nature for nearly 200 million years.

Not only that, but they also play a vital role in the earth’s ecosystem. Moths are pollinators as well as an important source of food for other creatures. In some countries, humans eat moth caterpillars because they have a high nutritional value.

These characteristics make the moth a great symbol of nature for someone who wants to honor their connection to it. 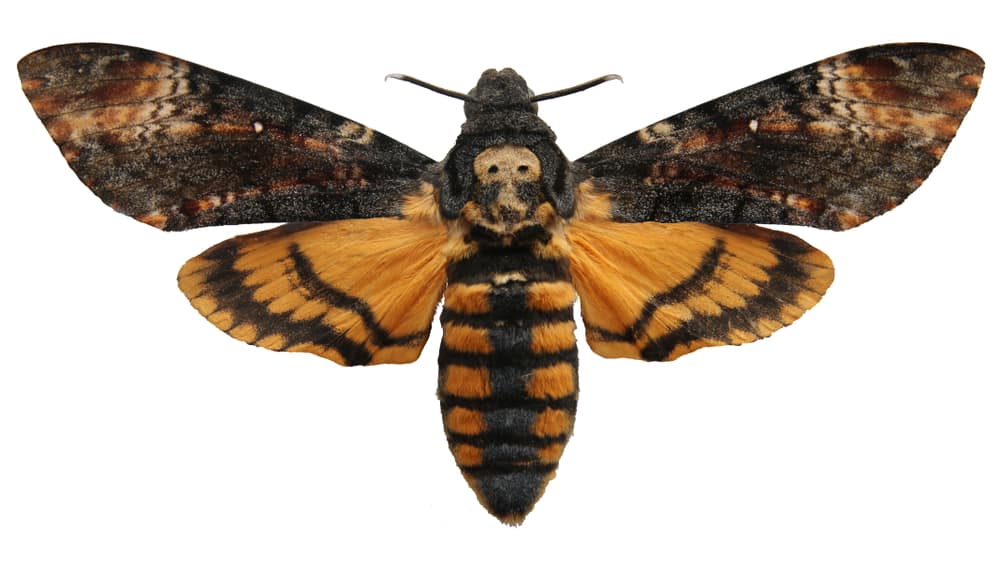 Many cultures see moths as omens. This is especially true of the death’s-head hawkmoth. This moth has a marking on its thorax that looks uncannily similar to a human skull. Because of this, it is seen as an omen of death, evil, and misfortune. It was even used in The Silence of the Lambs and other famous horror films.

In reality, the death’s-head hawkmoth is a harmless creature that couldn’t hurt a fly. As a caterpillar, it subsists off of potato plants. As a moth, it eats nectar and honey.

It doesn’t have much in the way of defense mechanisms, either. Its legs have tiny thorns, but they would hardly scratch a human. It’s also able to emit a squeaking sound when it’s alarmed to try and scare off prey. However, you may find the sound cute rather than fearsome.

Regardless of the death’s-head hawkmoth being harmless, it hasn’t lost its symbolism of being an omen of death. A tattoo of this moth can be a reminder to the wearer that death could happen at any moment, so it’s important not to take life for granted.

Some may choose to wear the moth as a protective charm. Not only are moths protected by their incredible ability to camouflage, but a number of moths are poisonous if ingested.

There are some moth caterpillars that have poisonous spines capable of sending even humans to the hospital. The puss caterpillar looks like a soft tuft of hair but actually contains spines laced with venom that can cause vomiting, intense pain, and respiratory stress.

As you can see, moths have many protective defenses no matter what stage of life they’re in.

We’ve already shared some information about moths while discussing their symbolism, but they are truly fascinating creatures. Let’s take a look at some facts about moths.

Moths are a common food source for many predators, bats being among them. However, one particular species, known as the tiger moth, can actually jam a bat’s sonar.

Bats use echolocation — they emit high-pitched sounds that bounce off of objects and return to the bat’s ears, allowing them to tell where things are. Tiger moths, however, are able to emit ultrasound waves in response to a bat’s echolocation that effectively inhibits the bat’s ability to find them.

A number of moths come out of their cocoons without mouths. A prime example is the luna moth that we discussed earlier. Its lifespan is roughly a week-long, and its sole purpose is to mate. That must be why it’s so beautiful.

Moths Are Masters of Disguise

Moths are masters at the art of camouflage and impersonation. For instance, the hornet moth looks like a hornet, though it doesn’t have a nasty stinger. The wood nymph moth looks just like bird poop! It’s these adaptations that keep moths from becoming something’s dinner.

Though moths don’t have noses, they’re still capable of detecting scent with their antennae. The kicker is that some, like male giant silkworm moths, can smell females up to seven miles away! The females give off sex hormones in order to find mates. Perhaps you could also think of a moth tattoo as meaning love or passion.

Next time you crack open a cold one, consider saving a teaspoon or two for your moth friends. According to The Nature Conservatory, smearing a mixture of beer, banana, and brown sugar onto a tree will attract moths for your viewing pleasure.

Silk is a favorite fabric of many. It feels smooth and luxurious, and it’s great for reducing bedhead when used as a pillowcase. But did you know that silkworms are actually moth larvae? The larvae use their silk threads to make their cocoons, which are then harvested by silk manufacturers. It takes roughly 2,500 to 3,000 cocoons to make one yard of fabric.

Moths Are Fascinating and Symbolic Creatures

Moths are fascinating creatures that are often misunderstood. Many people brush them off as stupid or pestilent, but their ability to adapt and evolve is impressive. They’re also incredibly important to our ecosystem as both pollinators and a food source for other animals.

It’s no surprise that moth tattoos are becoming increasingly trendy. They’re easily customizable as there are hundreds of thousands of moth species to choose from. Not only that, they can represent an array of different meanings, so it’s easy to find a personal connection with this symbol.