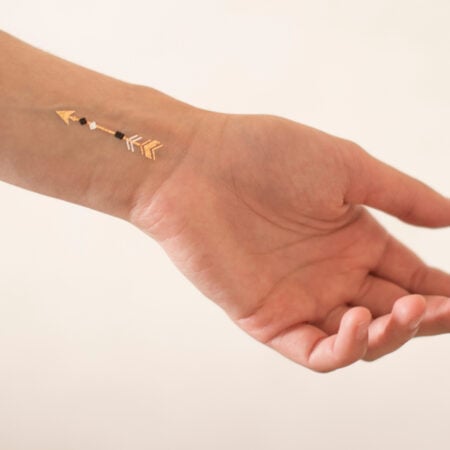 Choosing a tattoo is a very personal thing. You’re adorning your body with words or images forever (or until you’re willing to go through the expensive and uncomfortable process of laser removal). So picking something that you really love is important. Arrow designs have been extremely popular for tattoos, with their roots going back centuries.

Arrow tattoos can be very striking and beautiful, but each style of arrow can mean something different, and choosing the right one makes a statement about you to the world. We’re here to help you get started in sorting out what style of arrow tattoo is best for you both aesthetically and symbolically.

Arrows have been used for hunting and war by nearly every civilization on earth. There’s something primal about the image of such an ancient weapon being imprinted on your skin.

Different cultures use arrow symbolism in different ways, however. When you’re choosing a design, it’s good to be in the know about how it’s been used in the past because it will carry those connotations with it. Not all arrows mean the same thing.

While arrows are everywhere, arrow tattoos are a little more specific to certain cultures. Here are some of the most common ways arrows are used culturally.

Using arrows in skin decoration is deeply connected with Native American cultures and has been found in some of the earliest tribal cave art in the Americas. They were used to symbolize strength as a weapon of war and a tool for hunting. Arrows were the means by which a tribe protected its people and provided food for it. Alternatively, a downward-pointing arrow was used by some native tribes as a symbol of peace.

Many modern tattoo designs have meanings that can be linked to this tribal imagery but can still be used by non-Native people in a respectful way. A bundle of arrows has a very particular meaning to native culture, however. It was used as a symbol of the five founding tribes of the Iroquois League. It’s always good to do research if you are trying to do tribe-specific tattoo designs to ensure you’re doing it in a way that honors that culture.

Tattooing has been a big part of military culture for centuries. While some symbolism is specific to different branches of service (Navy anchors, anyone?), some designs are perennial favorites across the whole of the armed forces.

With its connections to warfare, it’s not surprising that arrow symbolism shows up in military tattoos. The most classic arrow design among soldiers, however, is used to symbolize love. A heart pierced through with an arrow, usually featuring a loved one’s name at the center, has been a popular choice for deployed soldiers past and present.

Inspired by the myth of Cupid and his arrow of love, it’s used to symbolically keep loved ones close to you no matter how far apart you are.

While symbolism is culturally ingrained, it can also be deeply personal.

Arrows can be used to represent, not traditional warfare, but personal battles. Whether it’s to memorialize your struggle with others or within yourself, it can be representative of overcoming your own demons.

Even superheroes, like Hawkeye and the aptly named “Arrow,” use arrow symbols. You may want to embrace the symbols linked to these superheroes to show that you feel a kinship with the characters or admire certain qualities they have. It can also show that you’re a fan of those franchises.

Arrows can also be the symbol of the zodiac sign, Sagittarius. Some people wish to show their own personal zodiac sign or touch on its symbolism. This sign often represents the qualities of strength and masculinity.

Your Own Unique Meaning

The particular design you choose can reflect commonly accepted symbolism, but it can also be unique to you. Choosing a style of arrow specific to your family’s ancestry, for example, can be a way to honor your roots in a unique way.

Different Arrow Styles and Their Meanings

Specific arrows have specific meanings. Choosing one of these designs makes a statement to the world about who you are and what you’ve experienced.

While tattooing dictionaries will have hundreds of different designs, we’re focusing on a few of the most typical symbols related to arrows. Of course, some of these designs may have more than one meaning, and you may have your own personal take on the nuances as they relate to your own life.

Despite being a weapon, many arrow tattoos have positive meanings that relate to our journey through life.

Some people use the image of a single arrow almost like a talisman for protection. It’s used to represent defense against evil or harm.

While most arrow designs tend to point to the right, a left-facing arrow is a specific choice that carries meaning as well. It shows the intention of chasing something away by pointing “backward.” This can be about warding off evil or putting personal trauma behind you.

A single arrow can also be a sign of independence.

Rather than representing defeat, an arrow with its tip snapped off is a sign that means a battle has come to an end. Connected to the idea of “burying the hatchet,” it means that it’s time to put away your weapons because the fight is over. It can be used to indicate the end of a personal struggle.

A compass with an arrow laying over the directional points is a popular choice for its obvious connections to travel. While jet-setters may favor this tattoo, it has other significance. It can represent the start of any new journey or a change in direction.

When your life path changes course, whether due to a new relationship, career, or a change in philosophy, an arrow and compass design can commemorate this shift.

Arrow With a Bow

When a design features an arrow pulled back on a bow, ready to be shot, it can represent tension and struggle; perhaps you’ve always felt at odds with conflicting parts of your personality, the society you live in, or your family. This design can also mean that you’re taking aim and preparing for whatever comes next.

The image of an arrow releasing from a bow is a bit different. Rather than focusing on tension, it’s about moving forward. It can also represent a transition in your life. Similar to a compass and arrow design, it can show you taking a new course.

While a downward arrow means peace in Native cultures, two arrows facing in opposing directions means the opposite: war or conflict. These arrows don’t typically touch; instead, they show two viewpoints at odds. This is not to be confused with arrows crossing each other, which can represent friendship.

This is a newer, more modern arrow design that has started to gain popularity. A diamond is the hardest material on earth. It can represent the hardships someone has gone through, and the arrow going through it represents courage and determination. The design focuses on strength and being unbreakable. It’s a motivational message about moving forward.

Overall, arrows are a strong symbol. Whether you want to commemorate the struggles you’ve overcome or the changes your path in life has taken, you can find an arrow design that says something specific about you; where you’ve been and where you’re going.

No matter your reason for choosing the arrow as a piece of personal symbolism, you want to make sure it’s something you’ll be happy with for a long time. Take some time to research different tattoo designs whether on tattoo websites or places like Pinterest. This will help you decide what style you like best.

Even if you’re not an artist, you can sketch out a rough idea of what you want. Most tattoo artists will be willing to help you customize your design as well. Remember, they are artists, after all. They can help bring your ideas to life even if you failed elementary school art class. So choose someone you trust and work closely with them to create a specific design.

Of course, if you just want to pick something out of the book at the tattoo studio, that’s okay too. Sometimes you just want a beautiful piece of art, not a full skin-autobiography. And that’s fine. It’s your body art, so as long as it makes you happy, you’re doing it right.

Find the Arrow Meaning That Speaks to You

With a wide range of meanings, from changes in your life path to celebrating friendship, arrow tattoos are a wonderfully expressive option. Take some time to sort through their various meanings, and find the one that resonates most deeply with you.

Finding the right arrow tattoo for you will help inspire, celebrate, or comfort you for many years to come, especially if you care for it properly. No matter what you’re trying to say with your body art, there’s almost certainly an arrow tattoo style that can help you say it.