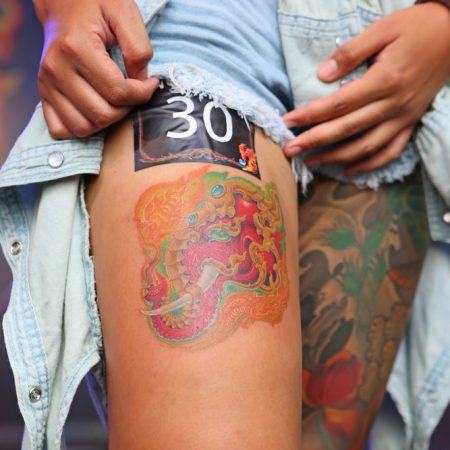 Elephants. You might be thinking of the graceful creatures you’ve seen in the zoo.

Or you may even be thinking of the Christmas gift-giving game White Elephant, or “the elephant in the room,” or Disney’s Dumbo, right?

Elephants have a lot of symbolism in different cultures around the world. For some, they represent wisdom. For others, they represent strength. Did you know that in Western cultures, children’s books use elephants to depict model behavior?

Many people choose an elephant tattoo because it has a special meaning to them; however, elephant tattoos can mean many different things, so the symbolism isn’t the same for each person.

There are many symbolic meanings tied to elephants that might prompt people to get them as tattoos. Perhaps they want the tattoo as a reminder of the symbolism or to show others what’s important to them.

The symbolism is often based on the characteristics and behaviors of elephants, so let’s take a look at what some of those are.

Elephants live in groups that are typically led by the oldest female in the group. Elephants follow a matriarchal system in which the males leave their mothers to go live on their own or with other males, leaving the female elephants to lead the group.

This type of matriarchal society has caused the elephants to become a symbol of female leadership and power. Women might want a tattoo of an elephant to represent leadership. It might also represent motherhood and the leadership that comes with being a mother to a child. Want to remember a woman who has guided you throughout life? Get an elephant tattoo.

When left alone in the wild, an elephant can live for 70 years. They spend their lives roaming in a group with their family. The group protects the young elephants when there is a predator nearby to protect them from harm. Because of the group effort to keep each other safe, they can live long lives, so long as poachers don’t hunt them first.

Not many animals can live for so long, even when they are well protected and have sufficient food and water supply. This is why elephants are notable creatures and are symbolic of longevity. With longevity and leadership in mind, you could use the tattoo to remember your grandmother or another family member who has left a lasting impression in your life.

Elephants are social creatures. The females depend on their groups when it comes to raising their young. The entire group helps protect the young ones and each other. New elephants depend on their mother for the first three years of life.

The males typically live on their own, but they occasionally create their own male groups, too. Even the loners need a companion at times. A tattoo of these social creatures can serve as a reminder to keep friends and family close, even if you don’t think you need to.

An elephant never forgets. While you may assume that’s just a saying, elephants do actually have a good memory, although that doesn’t mean they’ll remember everything. What they can remember is the scent of other female elephants, even if they haven’t seen each other in years. They can also remember feeding sites they’ve been to before and are possibly capable of remembering where all their family members are.

What’s phenomenal is that elephants appear to be able to recognize themselves in mirrors, and they can even recognize the bones or tusks of relatives who have died. Few mammals are capable of this kind of memory, which makes the elephant known for its wisdom.

The female leader of the group is known to “train” her oldest daughter so she can lead the group once the leader dies. It appears that when the younger elephant takes on her new role as the group leader, she doesn’t seem to know as much as her mother did and won’t react to danger as she should.

An elephant tattoo could be a reminder to continue learning and be wise, both of which are important for leadership roles.

Various cultures around the world and throughout the centuries have beliefs associated with elephants in their religions. Many of these religious symbols still exist today and are why some people choose to get elephant tattoos.

In many African societies, it’s believed that elephants are where the souls of their ancestors are kept once they die, or that their chiefs are reincarnated as elephants when they die. In the past, some people would put elephant tusks in the ground with the leaders they buried.

Elephants are more prominent today in Buddhism, Hinduism, and Islam. In Hinduism, a deity with an elephant head called Ganesha is as important as the gods Brahma, Shiva, and Vishnu. It’s believed that Ganesha will bring success to people and give them their desires. An elephant tattoo with an upturned trunk is believed to bring good luck.

In Buddhism, it’s believed that Buddha was a white elephant but was reincarnated as a human. White elephants are a rare albino elephant that is sometimes considered to be pure. Because of this association, a white elephant used in a maternal tattoo can be an especially strong symbol of fertility.

In Islam, Muhammad was born in the Year of the Elephant, 570 AD, which gives elephants some prominence in the religion.

In these religions and cultures, elephants are given importance and are thought highly of. Some people might want to get an elephant tattoo that will remind them of the associated attributes that are revered in their religion. 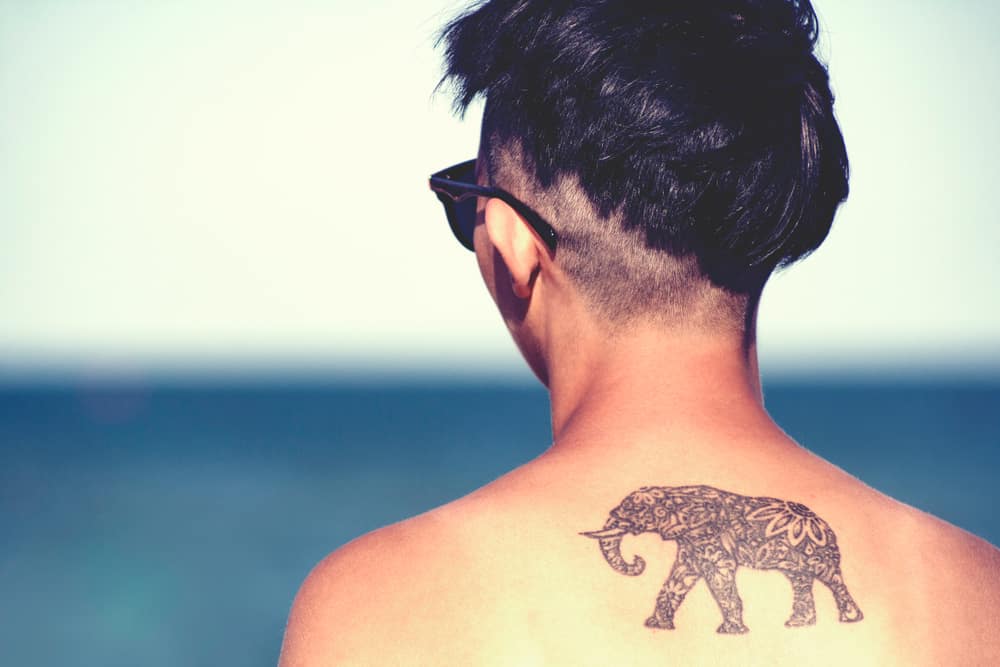 The elephant plays many roles in the United States. Because of the vastly different meanings of elephants in Western culture, getting a tattoo of one in a place like the United States might mean something different for each person.

In Western countries, like the United States, elephants are seen as exotic because they’re not native to the area. Elephants are only found naturally in certain parts of Africa and Asia, and there aren’t any similar animals in North America. This is perhaps why elephants have been in circuses for so long – they amuse the audience because they’re seen as something unusual or extraordinary.

They’re often used in children’s stories to promote good behavior in children. They are also typically in stories about little elephants returning home to their families after being separated, like in Disney’s Dumbo.

This could be because young elephants stay with their mothers for three years, and often for the rest of their lives because the elephants live in groups. A young elephant isn’t capable of living on its own, so maybe this dependence is why they are used in stories and movies to show children “model behavior.” A good child doesn’t leave their mother, right?

On a completely different note, an elephant has also been the symbol of the US Republican Party since 1874. It first appeared in a cartoon depicting an elephant scaring away animals that represent other political parties.

These varied symbolisms mean your tattoo may be interpreted differently than you intend. Perhaps you want the tattoo to remember your wise, strong grandmother; however, in the US, you might just make someone think of movies or politics.

The placement of a tattoo is almost as important as the meaning of the tattoo itself in some cases. Many parts of the body have strong symbolism tied to them.

If you want an elephant tattoo, consider all the possible meanings first. In the end, it doesn’t matter how other people interpret it – it matters how you interpret it.