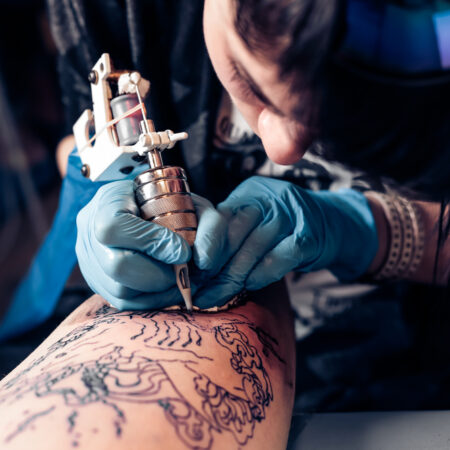 Diamonds are one of the most celebrated and sought-after gemstones on the planet. With their crystalline brilliance and magnificent sparkle, diamonds are a hallmark feature in jewelry and are used to convey passion, wealth, and power. These exquisite stones are so highly valued that they not only come with a hefty price tag, but they’re often targeted by criminals who will do anything to acquire them.

Historically, diamonds have been revered in cultures across the world, symbolizing invincibility, strength, love, and protection. This has made them a popular tattoo design, especially for those who want to use the stone to express power and beauty. This article provides information on the symbolism and history of diamonds, and what types of tattoo options are out there.

What Do Diamonds Symbolize?

Diamond is an ancient stone. Formed deep within the earth’s mantle about 900 million years ago, diamonds are brought to the surface through volcanic eruptions. It is estimated that about only 50% of the diamonds that travel through volcanic lava remain intact, which is also why they are so valuable.

But what exactly do diamonds symbolize? Diamonds are most strongly associated with love and power, but that’s not all that they’re symbolic of. 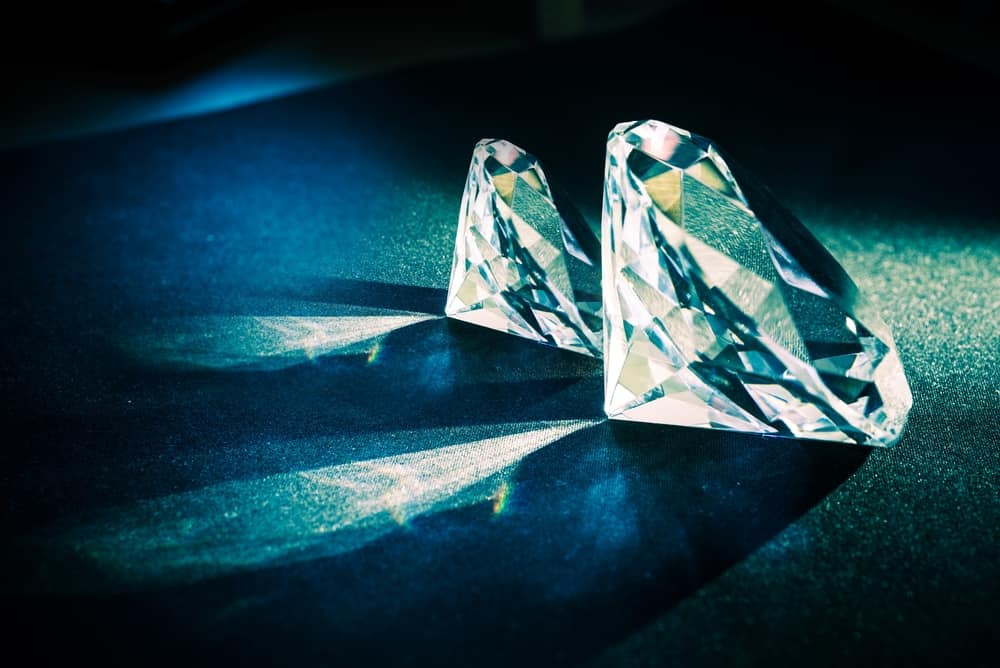 Perhaps no other gemstone signals love more than the almighty diamond. Embedded in engagement and wedding rings and given as gifts to our loved ones, diamonds are symbolic of the matters of the heart.

The sparkle and shine of a diamond are like no other. Its association with beauty has also led to sayings like ‘a diamond in the rough’, which refers to someone who has great potential (or is beautiful underneath) but lacks the outer ‘polish,’ so to speak.

Diamonds are incredibly hardy gemstones that owe their strength to their crystalline structure. Known as the diamond cubic, the arrangement of carbon atoms in a diamond makes it incredibly strong and durable.

Diamonds are one of the most precious stones on the planet and their association with wealth and prosperity has also made them synonymous with power. As a highly sought-after jewel, the diamond wields power in terms of its attraction and the many ways that people seek to acquire it.

In addition to the most well-known symbolism discussed above, the diamond also has additional associations throughout our world.

Diamonds are the signature birthstone for the month of April. People who are lucky enough to have a diamond as their birthstone will often wear it as jewelry or as a tattoo to symbolize their birth month. Whether it’s a ring, pendant, or a set of earrings, diamond birthstones are said to increase inner strength and bring better luck with relationships.

Diamonds have long been associated with eternity, particularly when it comes to love and romance. Traditional eternity rings, for example, will feature a row of diamonds to signify one’s lasting and undying love.

Whether they’re featured in a Hollywood movie or donned on the hands of the rich and famous, diamonds are strongly associated with glamor due to their relative rarity and high price.

The meaning of a diamond varies greatly across cultures. While some revere this stone for its beauty and strength, others see it as a carrier of healing powers. Below are some popular cultural meanings of diamonds in folklore and history.

In Ancient Egypt, diamonds represented the sun and were featured as a symbol of strength, power, courage, and truth. During the time of the Pharaohs (3000BC), diamonds were placed in the middle of the ankh to depict the sun. The ankh consisted of a cross with a loop and was a special symbol that signified the ‘key of life.’

Diamonds symbolized clarity and invincibility in Ancient India due to their purity, brilliance, and ability to capture light. The Hindus also believed that diamonds formed because of lightning bolts hitting the rocks. Conversely, it was also believed that the diamonds themselves attracted lightning.

This affection for the refractive qualities of a diamond led to the Indian saying, “He who wears a diamond will see danger turn away.” The Indian deity Krishna was also believed to have given a diamond to his great love, Radha, as a way to reflect her beauty in the moonlight.

The Ancient Greeks and Romans also had strong affinities with the diamond. For example, it was believed that diamonds were either tears from the gods or splinters from falling stars. The Greek philosopher Plato also wrote about the idea of diamonds being the embodiment of celestial spirits. Other references include depictions of Cupid’s arrows being tipped with diamonds.

The diamond later became associated with the term Adamas, which signified invincibility. This reference originated in a legend about Chronos, who turned a man named Adamas into a gemstone. The young man was subsequently blessed with invincible strength and good fortune.

Native American cultures revere the diamond as a representation of the earth. Also symbolic of the wind, the diamond symbol in this culture is drawn with a cross in the middle to signify the four cardinal winds.

The butterfly diamond shape in Native American culture is also significant as it symbolizes immortality. This symbolism is due to the migratory pattern of butterflies and the way they travel great distances to their second home during colder months.

During the Middle Ages, diamonds were thought to be a miracle stone that carried healing qualities. By placing the diamond on the body, many believed that it would cure all kinds of illnesses such as stomachaches, memory loss, nightmares, mental illnesses, skin diseases, and heart and head ailments. Diamonds were held in high esteem regarding health until Pope Clement VII died after swallowing a mixture that contained powdered diamonds.

If you’ve decided that a diamond tattoo is for you, there are many ways that you can incorporate the symbolism detailed above. Below are some of the more common tattoo styles and their associated meanings.

3D tattoos are a popular way to showcase a diamond as they allow you to emphasize the power and beauty of this gemstone. Three-dimensional diamond tattoos look great on nearly any part of the body, too, as you can keep it simple and small, or go big and blingy.

If you’re after the glamor side of the diamond, another popular trend is to design it with a crown. Typically featured with a crown atop a diamond (either centered or to the side), this design can be as complicated or as simple as you like.

Black diamonds are associated with action, passion, and energy. Diamonds of this color, therefore, make a great tattoo if you’re aiming to express inner strength and enduring love. These tattoos also look great in black and grey shades.

Red diamonds signify passion and powerful rituals. If you’re aiming to showcase your fiery side, a red diamond tattoo is a great way to do that. These tattoos can also be designed with other elements such as fire or hearts.

If you’re aiming to express the calmer side of this stone, blue diamonds represent peace, devotion, and spirituality. As a jewel, blue diamonds are especially popular because of their elegant and striking color.

Green diamonds represent harmony and the natural world. If you’re a nature lover or environmentalist, a green diamond tattoo is a great option. These tattoos are often inked in an emerald green color, giving them a striking appearance.

For the more delicate at heart, pink diamonds symbolize creativity, love, and romance. These tattoos are great if you’re aiming to convey something softer. Pink is also ideal for creating designs with a bit of sparkle.

Cosmic diamond tattoos are popular for representing the spiritual side of these stones. Often inked in bright pinks, purples, and blues, cosmic tattoos are a colorful way to pay homage to a diamond’s historical associations with the gods.

Continuing with the cosmic trend, a diamond eye design or one with an all-seeing eye in the center can represent ancient wisdom. Whether you’d like to express your affinity with mysticism or your pursuit of knowledge, a diamond eye makes a powerful tattoo.

The internal anatomy of a diamond is geometric, which is great for highlighting in a tattoo. Often inked as an outline, these tattoos are great for representing the optical properties of a diamond in a simple way.

Diamond tattoos are also commonly drawn with text. This can be a name or a phrase that will enhance the message you’re trying to communicate. Text tattoos are also a great way of enhancing the aesthetics, especially if you choose a dazzling font.

Getting a Diamond Tattoo

While there aren’t many variations on the shape of a diamond, there are many ways you can represent it. Therefore, it’s a good idea to first establish what themes or meanings you’d like to express.

For instance, are you interested in conveying the beauty and glamor of the diamond? Or are you keen to represent its deeper associations with love, passion, and eternity? Whether you’re aiming simply for aesthetics or for something that signifies a diamond’s history, it’s important to decide on the theme.

As well as the theme, it’s also worth deciding on the best location. As the diamond has a round body, you’ll want to aim for areas such as the hands, forearms, biceps, back, or shoulders. The location of the tattoo can also enhance the meaning. For example:

In terms of the lower body, diamond tattoos are common on the thigh, ankle, foot, and calf. The thigh is great for inking large designs that can include additional features; however, bear in mind that the tattoo won’t be as visible. Foot and ankle tattoos are also great for wrap-around designs.

Color is another important consideration. As mentioned above, the diamond can be represented in a variety of different colors to signify specific meanings. If you already know what theme you’re after, then the color should be easy to choose.

Diamonds will look good in nearly any color you choose, though, so it will really come down to your personal preference.

Other options to consider are whether you want the diamond to be solitary or combined with elements such as plants, insects, flowers, animals, or other jewels. You may even want to design several diamonds together or use just a section or sliver of the stone.

Whatever you decide, take some time with your tattoo artist to see what they can offer. View as many options as possible so that you’ll be happy with the final product – you may wish to get started with our 50 small tattoo ideas for women article.