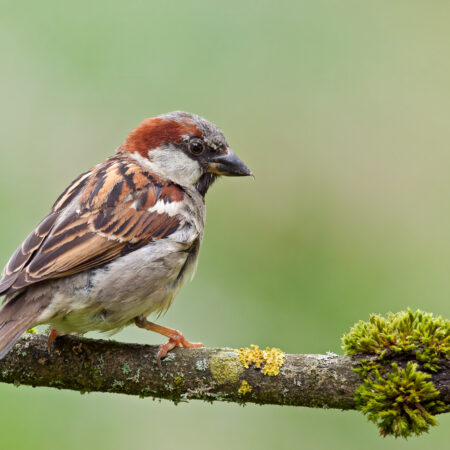 Sparrow tattoos are lovely pieces of art that can be made small and simple or large and detailed. Some people want to have this beautiful work on their bodies and don’t care so much about whether or not it has a deeper meaning.

For others, the meaning is the most important part of getting a tattoo. If you’ve been looking at sparrow tattoos with stars in your eyes, but you’re not sure if they’re meaningful to you, then you’ve come to the right place.

We’ll be giving you the rundown of the sparrow’s symbolic nature. Not only that, but we’ll also explain the differences between sparrows and swallows as they’re often confused for one another. Finally, we’ll share some facts about sparrows so you can be certain that this is the perfect bird for your next tattoo.

What Do Sparrow Tattoos Symbolize?

The sparrow has a number of meanings associated with its small, feathered body. It’s likely you’ll find one that speaks to you. If not, at least you’ll have a lot of cool sparrow facts to share at parties.

You may be interested in representing your love for someone through a sparrow tattoo after hearing that they mate for life. This is true, but not for all sparrows. While most sparrow species do form monogamous pairs, many stay together only for the mating season.

The House Sparrow, however, does mate for life. Therefore, if you’re interested in a sparrow tattoo meaning love, you’ll want to choose the house sparrow specifically.

When we think of strong, brave animals, we don’t typically think of birds. However, sparrows are among some of the bravest avian species. They may be small in stature, but they’re willing to put up a fight to protect their nests or even to get what they want.

In fact, House Sparrows have been observed to threaten and attack around 70 different species that have entered their territory. They’re also known to chase other birds out of prime nesting spots, especially those that are man-made, like birdhouses or the eaves of a home.

House sparrows are social birds. They can often be found eating in flocks with other species. They roost together and sometimes share nesting areas with other House Sparrows.

They also partake in a number of social activities such as dust bathing, where they throw dust and soil over their feathers. They’re also known to enjoy group chirp-alongs where they gather in bushes and call together.

If you see yourself as a social person who enjoys nothing more than spending time with friends, then a sparrow tattoo may be a great fit.

Similarly, if you have a strong connection with your community, a sparrow tattoo can be a way to honor this. Not only do sparrows partake in the aforementioned activities, but they don’t migrate and tend to live in the same community for their whole lives.

Though sparrows can be savage when it comes to defending their territory and acquiring the best nesting spots, they are otherwise very friendly. As we mentioned, they are quite social with both their own species and other birds.

Not only that, most of them aren’t afraid of humans. This is especially true for birds that live in urban or suburban areas. It’s not uncommon for them to hop right up to your table in hopes of something to nibble on. Some are even willing to eat out of your hand.

If you see yourself as a friendly person and are looking for a tattoo to represent that, then the sparrow may be a good choice for you.

Humans have often regarded the ability to fly as symbolic of freedom, so like bird tattoos in general, the sparrow is also representative of this.

Interestingly enough, sparrows can swim underwater. The fact that they can walk on land, fly through the sky, and swim in the water means they have the freedom to go wherever they like.

Though many think of the bald eagle as the bird that symbolizes freedom, the eagle is also a very patriotic symbol. It symbolizes freedom in terms of politics and rights. While these things are important, freedom can also be the freedom to be yourself or to pursue your dreams.

If you connect with the latter, a sparrow can be a smaller, cuter symbol of freedom that isn’t directly associated with American patriotism.

Some of the greatest heroes in literature weren’t strong or brave, but instead, resourceful. Resourcefulness is an amazing quality to have because it allows you to adapt to any situation. You think smarter, not harder.

Sparrows are resourceful creatures. House sparrows don’t waste time looking for shelter in the wild. Instead, they use what we humans already have in place! This may be birdhouses we have set up or the eaves of our own homes.

Similarly, rather than looking for food in the wild, they purposefully live near humans because they know that we will feed them. In suburban areas, they enjoy seeds put out by us. In rural areas, they live near farms so they can pick seeds and grains out of livestock dung (gross yes, but still resourceful).

If you’re an artist, songwriter, author, or another type of creative, you may be able to connect with the sparrow. It may seem that birds’ chirps are set in stone, but that isn’t the case.

Being a creative isn’t easy; there are so many talented artists and it may feel like you’ll never be recognized. Perhaps a sparrow tattoo can be a reminder that your creativity won’t go unnoticed, though we hope it won’t take 20 years to gain traction! 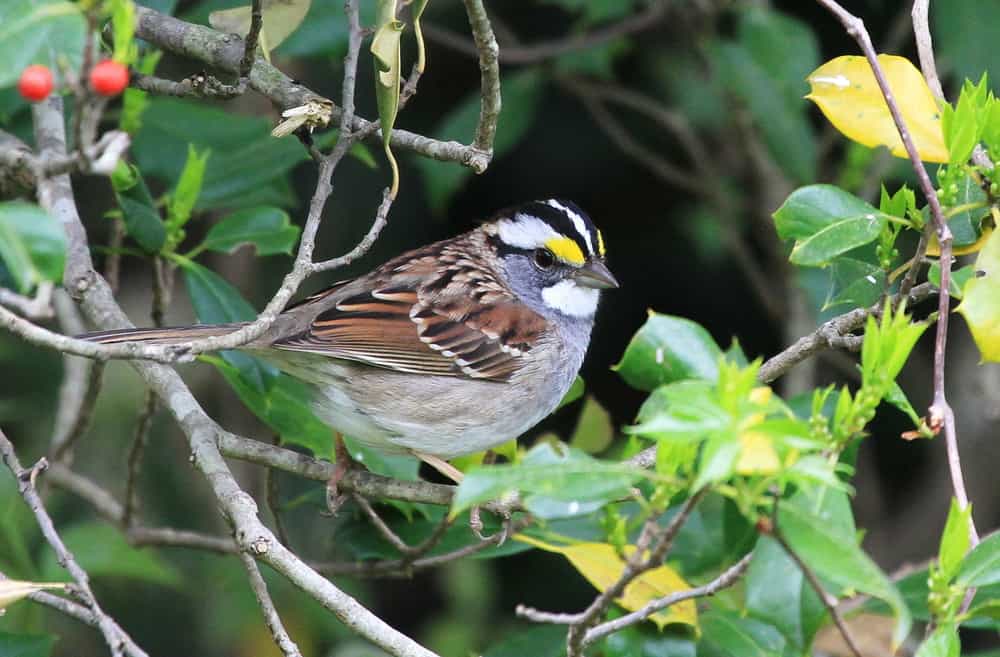 Sparrows vs. Swallows: Don’t Get Them Mixed Up

In your search to find out the meaning behind sparrow tattoos, you’ve probably come across a lot of misinformation. This is because many people mix up sparrows and swallows. Though they do share some meanings, they are different types of birds that can represent different things.

Let’s consider how sparrows and swallows look. Swallows are larger than sparrows and are typically between five and eight inches. Sparrows, on the other hand, are about four to seven inches long.

In terms of coloring, sparrows are usually brown or grey, but they may sometimes have patches of color on their necks or heads. Though there are a few species of swallows that are also brown, most of them have blue plumage.

One of the easiest ways to tell sparrows and swallows apart is to look at their tails. Swallows have forked tails, and sparrows do not. If you’ve been looking at tattoo designs of birds with forked tails, then you’re actually interested in a swallow tattoo, not a sparrow tattoo.

When it comes to sparrow tattoo meanings, there are a few common misrepresentations, most having to do with pirates. A number of websites describe these meanings as being attributed to the sparrow when in actuality, they belong to the swallow. Let’s clear them up.

The first is that sailors would get a tattoo of a sparrow for traveling 5,000 miles at sea. The falsity here is that it wasn’t a sparrow tattoo, but a swallow tattoo.

Similarly, many websites claim that mariners shared a spiritual connection with sparrows. They believed that the birds in their tattoos would ferry their souls to the afterlife should they die at sea. This story isn’t made up, but the tattoos and spiritual beliefs were about swallows, not sparrows.

Lastly, you may see the sparrow being described as representative of journeys or the return from journeys. This is also incorrect. Sparrows actually do not migrate, whereas swallows do, and it is their migration that inspired the idea of journey and return.

If you’re planning on getting a sparrow tattoo, you may want to know more about them. Having knowledge of sparrows may even help you come up with your own personal meaning for a tattoo. Let’s look at some sparrow facts!

The House Sparrow is believed to have originated in North Africa and spread to Europe, North and South America, New Zealand, and Australia. Because it is non-native to these areas, it is considered invasive. However, the house sparrow population is decreasing, and scientists have no explanation as to why.

One of the oldest wild sparrows lived to be 13 years and 4 months old. However, most sparrows live an average of just five years. Perhaps a sparrow tattoo could serve as a reminder that life is fleeting, and one should make the most of it.

Sparrows are pretty speedy for their small stature. The house sparrow can reach speeds of up to 28 mph.

As we mentioned, sparrows are not native to North America or Europe. This in itself is a testament to their ability to adapt and survive no matter where they are.

Perhaps one of the most impressive examples of the sparrow’s adaptability is the fact that it has even been found underground. That’s right, underground. A colony of house sparrows was found living in a coal mine 2,000 ft below the surface.

Okay, so maybe it’s not quite true to say that sparrows love humans. After all, can a bird truly feel such an emotion? What is true, however, is that house sparrows thrive in human-dense environments and prefer to live in such places.

Sparrows have learned that living near humans is much easier than living in the wild. Our infrastructure (sometimes to our dismay) provides them with cozy areas to nest, and food is easy to find, especially when you consider how many people enjoy keeping bird feeders.

It is even possible to get a sparrow to eat out of your hand!

Sparrows Have Contributed to Science

Because of their contentedness to live with humans and their general lack of fear toward our kind, house sparrows are easy for scientists to study. There have been about 5,000 research papers published on this species.

The Brave and Social Sparrow

Sparrows are fascinating creatures known for their adaptability, protectiveness, and sociableness. They aren’t big or intimidating, but they fight for what they want. They’re social with other birds and sometimes even with humans.

They can represent love, bravery, friendship, friendliness, freedom, resourcefulness, and creativity. And of course, they make great subjects for both detailed and simple tattoos.