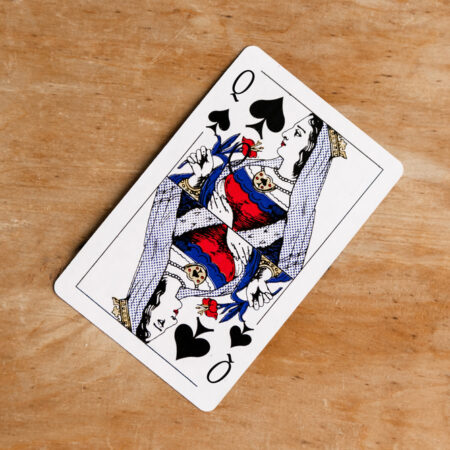 Playing cards are a popular addition to tattoo art, and a great chance to add subtle meaning to your work. Each card comes with its own history and connotations, as well as personal connections. We have the chance to use these simple, recognizable images to speak about who we are and what our own history is.

The Queen of Spades is one of the more unique cards in a standard deck. It plays a specific role in several card games, is based on a powerful goddess, and reminds us of the strength we can find within ourselves.

By having a tattoo of this card, or including it in a “hand” of cards, we can provide a new level of meaning to how we communicate through body art.

The Queen of Spades: A Short History

Spades are not shovels, as some may believe, but an invention that represents pikes or swords. French decks still use Swords instead of Spades.

As the modern deck was developed in Paris, each of the “face cards” came to be known as representations of famous Kings and Queens, emperors and saints. The Queen of Spades, in common knowledge, referenced Pallas, the human form of Athena – the Greek goddess of wisdom, handicraft, and warfare.

There are several different meanings that are most typically associated with the Queen of Spades tattoo.

Athena was the warrior goddess in Greek mythology, the one most to be feared and worshiped. Her birth involved Zeus’ head being smashed open with an ax, and her walking out, fully armored.

She was the goddess who aided Jason, Perseus, and Hercules, and she was so revered that the capital of Greece was named for her – and still is, to this day.

From this history, we can see how the Queen of Spades has come to be realized as a card that references great power, wisdom, and strength. To wear it as a tattoo is to reflect your strengths and celebrate the powerful women of history and today.

It may also represent a woman who can plan well for the future and face great challenges even if feeling alone or abandoned.

Unique Value and Worth

In a far less serious way, even the card games we play today respect the role of the Queen of Spades. Unlike other Queens in the deck, only she plays important roles in a range of games, such as hearts, pinochle, and stud poker.

In hearts especially, it is well known that the Queen can be a game-changer. To hold her in your hand is to add 13 points to your score, while to hold her with all the hearts is to strengthen your hand against others. In this way, the Queen of Spades may be the least desirable, or the most desirable. It is whether you know how to “use her” that makes the difference.

A famous Russian story by Pushkin, called “The Queen of Spades,” links the card to a shrewd countess who then haunts her killer, “tricking him” into losing all his fortune by having him play the Queen of Spades. This story was later turned into an opera by Tchaikovsky, further cementing the legend of the power of the card.

To this day, some card players refuse to play the Queen of Spades, fearful of the power she holds.

A single Queen of Spades on the inside of your wrist can symbolize a hidden strength and confidence, that “card up your sleeve” that makes you more powerful than most. This is a great tattoo for those with a quiet confidence and the faith that they can face any challenge that comes along.

It’s also a great option for anyone who feels underestimated; this tattoo can help remind you of your quiet, hidden power, even if others cannot always see it.

Elements or Changes to Add to Your Queen of Spades Tattoo

There are multiple elements you can add to your Queen of Spades tattoo to give it a more specific or personalized meaning.

For more subtle symbolism, some people prefer their Queen to be among a hand of cards, held by some other being of importance.

Others still prefer to choose an older design, in which the Queen is one of the swords crossed, instead of Spades. This emphasizes the strength connected with the symbol and offers a more aggressive image.

The King of Spades

Cards often make powerful symbols for couples’ tattoos, and the King and Queen of Spades is especially popular. While the King of Spades represents a strong man (King David from the Bible), the role of the Queen is equal (if not greater than) in value.

This distinction may often be lost in other suits. While the suit of hearts may offer a greater romantic connection, Spades reflect a wise relationship, one in which two independent people find partners who are their equals.

Negative Meanings of a Queen of Spades Tattoo

As with many designs, the Queen of Spades may have negative connotations if presented incorrectly. In some cases, where the spade is presented with a Q without an accompanying image or card, this symbol has been used as a form of racism and misogyny.

This “meaning” appears to be a part of a small cultural group and should not be assumed when seeing such a tattoo. However, it is worth speaking with your tattooist to find out if there may be any sensitivity issues surrounding your specific design.

Find the Right Queen of Spades Tattoo for You

While there have been many interpretations of the Queen of Spades, one thing remains common – she is a symbol of power and wisdom.

Consider using her as a way of expressing your power and a reminder of the wise choices you will make as you continue your journey.