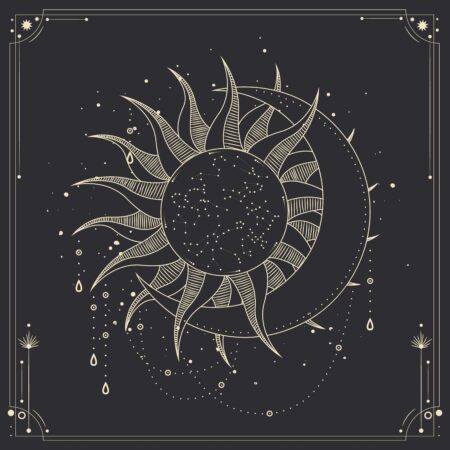 Once upon a time, humans had no idea what the Sun and the Moon were. The Sun was like a huge lamp that retired every night to be replaced by a comparatively dim but beautiful glowing orb. Because of this, the Sun and the Moon played vital roles in the religions of many cultures.

Now, we know that the Sun is a star, and the Moon is a moon (in other words, a huge rock orbiting a planet). However, knowing what they are doesn’t take away from their symbolic nature. In fact, our knowledge allows us to find more symbolic connections with these celestial bodies.

Perhaps, you are fascinated by the Sun and the Moon and are considering getting a tattoo combining the two. If so, you’ve come to the right place. We’re going to share the different meanings behind Sun and Moon tattoos.

What Do Sun and Moon Tattoos Symbolize?

On its own, the Sun often symbolizes truth, peace, hope, or faith. The Moon is a symbol of femininity and fertility, growth, and rebirth. Combined, they take on a number of new meanings.

Sun and Moon tattoos can represent the idea of Yin and Yang because the two are thought of as complementary opposites. The Sun is out during the day; it warms the Earth and provides light. The Moon is out at night, providing only a fraction of the Sun’s light and not much warmth.

‘Yin and Yang’ is an ancient Chinese philosophy of dualism. It describes the idea that opposing or seemingly contrary forces are actually complementary or interdependent. 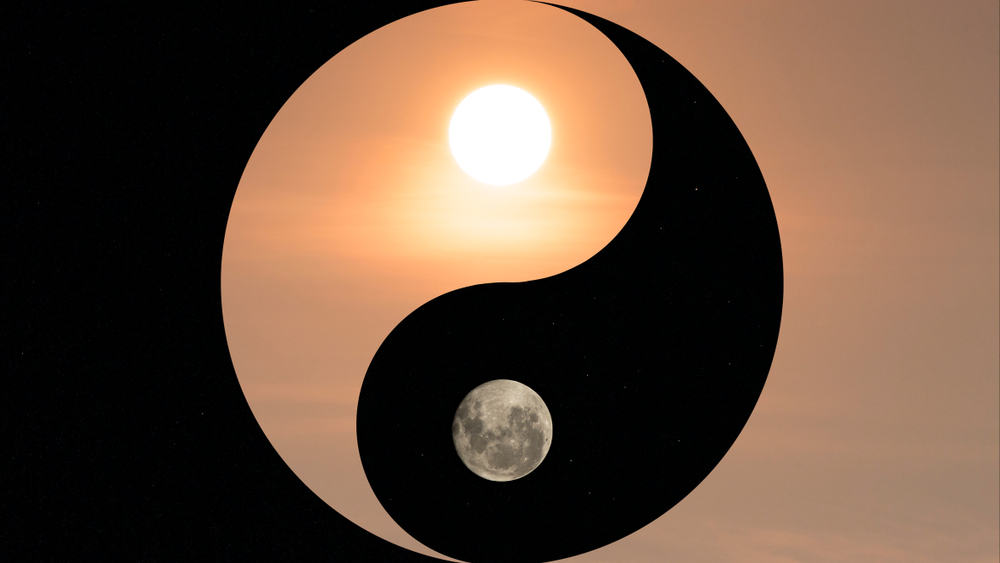 Yin is dark and is considered to be feminine, whereas yang is bright and considered masculine. Yang is often thought of as a powerful energy, often in motion, sometimes even aggressive. Yin, on the other hand, is seen as calm and steady, though it can be powerful, too. For instance, a forest fire is Yang, and a snowstorm is Yin.

It is also believed that Yang has the potential to become Yin and vice versa, and that nothing is 100% Yin or Yang. There will always be at least a drop of Yin within a primarily Yang force. This is why the Yin-Yang symbol has a white dot in the black half and a black dot in the white half.

How It Applies to the Sun and Moon

In the case of the Sun and Moon, the Sun is Yang and the Moon is Yin. The Sun is associated with warm, fiery, masculine energy, whereas the Moon is seen as a more serene, feminine energy. Yet, the Moon cannot shine without the Sun, so there is a bit of Yang within the Yin.

Though seemingly opposites, the Sun and Moon work in tandem to keep the Earth habitable for human and animal life. If the philosophy of Yin and Yang speaks to you, but you don’t connect with the traditional Yin-Yang symbol, then a Sun and Moon tattoo might be the perfect substitute.

Sun and Moon tattoos can also represent cooperation. As we explained, the Sun and Moon are seen as opposites. One is a hot, fiery star that we see during the day. The other is a cold, dusty rock that we see at night.

Therefore, placing the two opposites together can be seen as a representation of cooperation. In some ways, the Sun and Moon do cooperate with one another. The Moon itself does not glow. Instead, it reflects sunlight, providing us with something to see by at night.

Not only that, but both the Sun and the Moon exert a gravitational pull on the Earth, though the Moon’s pull is stronger than the Sun’s simply because it is closer. The Moon is primarily responsible for ocean tides, but the Sun plays a role as well.

As we explained before, it is also through cooperation that the Sun and Moon create a stable climate for the Earth. The Sun provides warmth whereas the Moon keeps the Earth from wobbling too much on its axis.

The Never-Ending Cycle of Life

The Sun is vital to the cycle of evaporation. It heats water until it turns into a gas. The water eventually cools enough and falls back to the Earth in the form of rain or snow. Precipitation, of course, is vital to the survival of many plants and animals.

The Moon also aids in life cycles. Not only are there many species that live in the intertidal zone — an area that is above water during low tide and below water during high tide — but it is also necessary for the reproduction of many oceanic species.

Great spans of coral reefs release clouds of eggs and sperm into the ocean all at the same time. They do so under a full Moon and will often delay this reproduction if the Moon is covered by clouds.

Both the Sun and Moon play vital roles in these never-ending cycles of life. If you are a spiritual person who believes that humans either transcend into a never-ending afterlife (such as heaven) or are reborn over and over in a constant cycle, then a Sun and Moon tattoo can be a good way to represent this.

A less religious interpretation for this symbol of never-ending life could also be the idea of one’s return to nature. Once you die and are buried, your corpse will be eaten by other organisms, giving back to the Earth that provided for you during your lifetime. Like the Sun and Moon, you also become part of the never-ending cycle of life.

The Moon and Sun represent the cycles of night and day, which are often symbolic of death and rebirth. We often associate death with darkness and rebirth with light.

If you feel you have changed greatly as a person, perhaps after hardship or some other eye-opening event, then you may also connect with this meaning. There are many who see themselves as being reborn after undergoing intense personal changes. 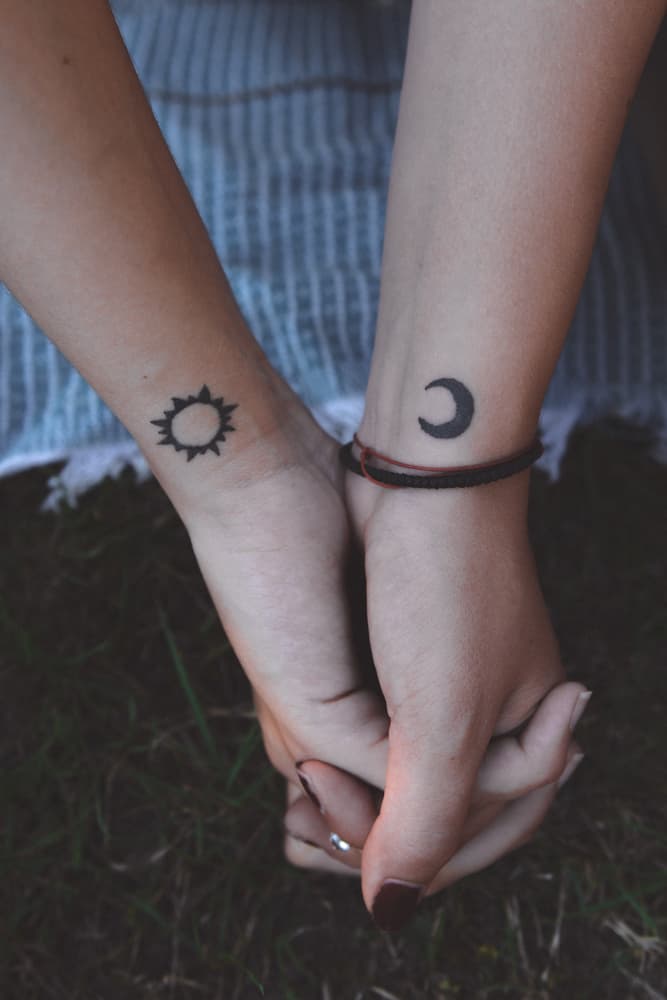 Sun and Moon tattoos are popular among couples. Typically, the female would get the Moon and the male would get the Sun because the Moon is seen as feminine, whereas the Sun is seen as masculine. However, we’re no longer bound by traditional ideas of gender or sexuality, so you and your significant other can decide between yourselves who gets what!

Still, Sun and Moon tattoos can be very romantic. Since this tattoo can refer to Yin-Yang as well as represent cooperation, it is a fitting option for couples. Not only should couples be able to complement one another (whether they’re opposites or not) but cooperation and communication are also important for a healthy relationship.

Another reason the Sun and Moon can represent love is because there are a number of fictional romances about these celestial bodies. It’s actually a rather common idea for people to imagine the Sun and Moon as spouses. In the traditional folklore of the Efik people of southeastern Nigeria, the Sun and the Moon are husband and wife.

The Sun and the Moon have always been the two most prominent objects in our night sky, so it’s no surprise that humans have imagined a romantic connection between them. Whether you’re interested in getting couples tattoos or simply want a tattoo to represent your love for someone, a Sun and Moon tattoo can be a suitable option.

Where you place your tattoo can add extra meaning to it (such as tattoos on one’s chest or ring finger), though placement is primarily a matter of preference. Still, it’s important to consider the best spot for your tattoo, and there are some factors that may help you decide.

First and foremost, you have to decide if you want your tattoo to be visible. Some may wonder what the point of getting a tattoo is if you don’t show it off, but tattoos can be extremely personal.

Not only that, unfortunately, some workplaces do not allow their employees to sport visible tattoos. You can also choose a spot on your body that can be easily covered, like the shoulder or arm. This way you can show it off when you’re not at work, but still be following the dress code when you are.

And of course, if you have no limitations and want the world to see the beautiful Sun and Moon art on your body, get your tattoo inked where everyone can see. A person’s neck, hands, and wrists are usually always visible — check out this article for some of our favorite wrist tattoo ideas.

It’s great to show off your tattoo, but doing so exposes it to UV rays. Just as the Sun can damage and age your skin, it can also fade your tattoo. This is true even in the winter when there’s snow on the ground and clouds in the sky.

To preserve your ink, you’ll want to cover it or use sunscreen. Make sure to reapply your sunscreen throughout the day, as it typically does not last more than a few hours.

Though people dread it for various reasons, aging is a truth of life. As you age, your metabolism slows down and your skin loses its elasticity. This means that you’re more likely to gain weight and you’re eventually going to get wrinkles.

If you’d like to avoid this, then you should place your tattoo on a bony part of your body. Examples include the collarbone, sternum, ribs, and shoulder blade. These bony areas are less susceptible to wrinkles and weight gain.

Some body parts, particularly your hands, see a lot more use than others. Because of this, tattoos in these areas are likely to fade much more quickly.

If you’ve got your heart set on getting a tattoo on your hand, we recommend you pick something that uses bold lines. Thin lines may fade into nothingness over time. Meanwhile, even if bold lines fade, they’ll still be visible.

Luckily, you can always get a touch up. Some tattoo artists will even guarantee their work for a certain period of time, so any necessary touch ups are free.

Celestial Bodies on Your Body

Sun and Moon tattoos make for an awesome work of celestial art on your body. They are symbolic of Yin and Yang, cooperation, death and rebirth, the cycle of life, and even love. They make for perfect couples tattoos as one person can get the Sun and the other, the Moon. Of course, you can also do this with a close friend.

Some people know immediately where they want their tattoo, but others need time to think it over. When deciding on placement, consider how the tattoo might change as your body ages. Remember that visible tattoos should be protected from the Sun, and tattoos on your hands are likely to fade more quickly.

Wherever you decide to get your tattoo, it’s bound to look as brilliant as the Sun and as gorgeous as the Moon.