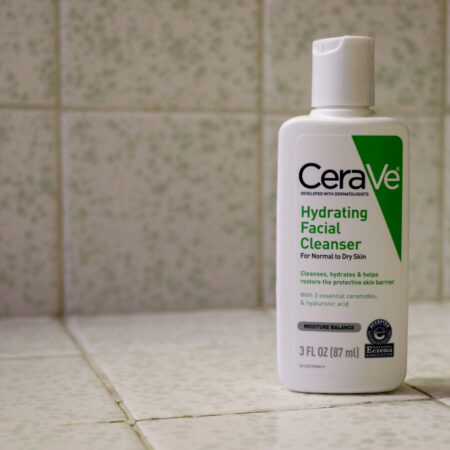 CeraVe is a saving grace for many people suffering from skin irritation caused by dryness, eczema, or other skin conditions. The products were developed with dermatologists in 2005 to create a solution for most skin conditions that other lotions didn’t offer at the time.

Many people swear by CeraVe and dermatologists and doctors commonly recommend it. But is this brand cruelty-free? The short answer is no, they’re not. Let’s take a look at why they aren’t.

CeraVe Is Not Cruelty-Free

CeraVe isn’t super clear about their practices, so they’re mostly not considered cruelty-free because of their parent company, L’Oréal.

In CeraVe’s FAQ page, they say, “CeraVe products are not tested on animals.” It sounds promising, but that’s not enough information, and there’s no proof. We’re left to take their word for it.

CeraVe may not test its products on animals, but there are many other possibilities that they don’t address:

What they do make crystal clear is what countries they sell in on their Countries & Regions page. They sell in China, which has specific rules and regulations that require many imported products to be tested on animals before they can be sold to the public. We’ll talk about that in more detail later.

So, although they say they don’t test on animals, they’re deemed not cruelty-free because they sell in China.

L’Oréal Is Not Cruelty-Free

CeraVe’s parent company, L’Oréal, isn’t cruelty-free either, but they are making efforts to put an end to animal testing. They have alternative methods of ingredient and product testing that don’t include animals.

These methods are actually pretty cool – they use skin models that closely resemble human skin on which they test products to see if they cause any harmful reactions. They also use predictive assessment tools, imaging techniques, molecular modeling, and several other methods.

L’Oréal says they haven’t tested their products on animals since 1989. On their website, the brand claims that it “no longer tolerates any exception to this rule.” Sounds like a breath of fresh air, but don’t relax just yet.

Some countries require animal testing on imported cosmetic products. China is the most notorious for their strict animal testing laws, although they have started easing up in the 2010s. L’Oréal sells their products in China, which means their products are most likely tested on animals before they get to the public.

What does L’Oréal have to say about this? Well, that’s where it gets a little fuzzy.

L’Oréal Is a Bit Misleading

As we mentioned in the section above, L’Oréal says on their website that they don’t tolerate any kind of animal testing. But, the next statement says that some countries will conduct animal tests themselves with L’Oréal products. Here’s the direct quote:

“Certain health authorities may nevertheless decide to conduct animal tests themselves for certain cosmetic products, as it is still the case in China. L’Oréal is the most active company working alongside the Chinese authorities and scientists for over 10 years to have alternative testing methods recognized, and permit the cosmetic regulation to evolve towards a total and definite elimination of animal testing. Thanks to this, since 2014, certain products manufactured and sold in China like shampoo, body wash or certain make-up products are no longer tested on animals.”

The wording they chose for their official statement makes it sound like the situation is entirely out of their control, but this just simply isn’t true. If they don’t want their products tested on animals, they could choose not to sell their products in those countries. So, all the products they sell in China, including CeraVe, can’t be considered cruelty-free.

What makes the situation a little muddier is what the L’Oréal Paris website says about selling their products in China: “By being present in China, L’Oréal can enable the regulation to evolve.” They say that their company is responsible for China for easing up on animal testing laws, but do they really have to sell their products in the country to make these changes happen?

On one website, L’Oréal says it’s not up to them, and on another, they say that their presence in China allows them to do good. This undoubtedly puts uncertainty in their customers’ minds and barrs them from being labeled cruelty-free.

Progress Made in China

According to L’Oréal, China began changing their laws regarding animal testing in 2014. As of May 1, 2021, China is officially not testing any cosmetic products that fall under “general use.” General use products include makeup, shampoo, lotions, and other cosmetics that non-professionals buy for skincare and beauty needs.

CeraVe offers sunscreens, which are considered “special use” in China, so those for sure will still be tested on animals. But, a majority of their products are likely not tested anymore, as long as the proper certificates and papers are provided to be allowed exemption.

CeraVe is a godsend for many people suffering from unpleasant skin conditions like psoriasis or eczema. If this sounds like you and you’re not comfortable supporting a brand that isn’t cruelty-free, we have a couple of recommendations that are sure to soothe your dry skin.

Ceramedx is for people with sensitive skin who need gentle moisturization. It’s dermatologist-approved and great for those who suffer from eczema, although it doesn’t have the same certifications as CeraVe.

If you want to try out Ceramedx’s products, try starting with their Restoring Body Lotion. It has ceramides to restore moisture to dry skin, and it’s cruelty-free, vegan, gluten-free, fragrance-free and free of harsh ingredients.

Another product to try is the Extra Gentle Body Cleanser. It works like a lotion, but it cleanses the skin and removes dirt and other impurities that cause further irritation.

St. Ives is another great brand that offers soothing lotions and gentle cleansers made from plant-derived products. They’re a little controversial, but most of their products are actually fantastic. Many of their formulas are plant-based, with only a few exceptions. They’ve been PETA-certified as cruelty-free since 2018 and are dermatologist-tested and approved. Their products are easily available on Amazon, and they’re typically more affordable than many other cruelty-free brands.

If you have incredibly dry skin, try their Hydrating Hand & Body Lotion. This lotion is made with Vitamin E and avocado oil to replenish moisture in dried-out skin. If you have eczema, this would be the perfect lotion for you.

If you’re a fan of CeraVe, it may be hard to walk away right now, but there are several great products on the market that are sure to leave you just as moisturized and happy without the associated animal cruelty.