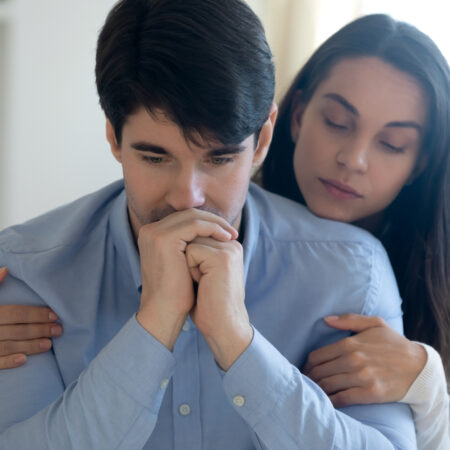 It’s not every day that you encounter a man who is in touch with his emotions. Instead of having the hard and cold exterior men typically have, your boyfriend might be soft and sensitive. But if you don’t know how to handle it, what hope does your relationship have?

The key is usually just good communication, and a lot of patience. However, it takes more than just a bit of effort to see results. Let this guide on how to deal with a sensitive boyfriend walk you through with tips and tricks that will keep your romance alive.

If your boyfriend is more sensitive than the average person, there is a chance he is a highly sensitive person, or HSP. HSPs are people who process and react to physical, social, or emotional stimuli in a much deeper way. This is due to their heightened central nervous system, which is a genetic trait that 15-20% of the population has.

Regardless of whether your boyfriend is an HSP or not, you shouldn’t think of your sensitive boyfriend as being dramatic; that word and your boyfriend shouldn’t even be in the same sentence. He experiences things differently than you do, and every emotion he feels is real to him, whether or not it seems real to you.

So how do you deal with a sensitive boyfriend? There isn’t one answer. Rather, it’s a combination of things, which you’ll learn about below.

You’re probably used to men not being able to take a hint, which, in many relationships, results in days filled with cold shoulders or passive-aggressive actions. Your sensitive boyfriend, however, will be able to pick up that something’s wrong the moment your tone changes even slightly, and he’ll find it greatly distressing.

So if something really is wrong, you should be as straightforward with him as possible. There’s no room for subtle hints which might just drive him crazy. Tell him what you want so he can work on it immediately.

You don’t need to overcomplicate things, and he shouldn’t have to overthink your cryptic remarks. This will just lead to unnecessary anxiety and put a wrinkle in your relationship.

Sensitive individuals require more time to process their feelings when dealing with a problem or change. You need to give them time if you want them to be able to properly move on. And don’t believe what they say about how couples shouldn’t go to bed angry—some fights don’t need to be resolved overnight.

Communication is key in any relationship, and even more so when you’re with a sensitive guy. If you want to know how to deal with a sensitive boyfriend, you need to learn how to communicate with him.

Here are five tips to have a more meaningful conversation:

They say to fight fire with fire, but you don’t want to push your significant other away. Instead, be more understanding of his emotions and try to connect with him to figure out the root of the problem.

And it’s never a good idea to berate him for his sensitivity. Remember, he might not be able to help it, but you can. Always be mindful of your tone and what comes out of your mouth when you’re speaking to him.

While we did say that fights don’t always need to be resolved overnight, it’s important to try and resolve conflicts as soon as possible, especially if the cause is a simple misunderstanding. You don’t want it to fester and turn into a bigger problem. And you absolutely don’t want your boyfriend to resent you or think about what happened for weeks.

If it’s something you’re confident you can resolve by talking to him for a couple of hours, then do exactly that, and try to be as open as you can. Make sure you are calm and that you listen to every word he’s saying. Find out how the situation makes him feel, and ask him how you can help ease the burden.

Non-Violent Communication, which includes using “I” statements instead of accusations, expressing your needs, and trying to be empathetic, can be especially useful.

Empathy goes a long way, but it’s not always easy to do. It can be even harder to empathize if you’ve already been in a similar situation (a fact that goes against common knowledge).

Still, you’re going to have to try every time your boyfriend is upset or in low spirits. Try to make him feel that you’re receptive to his emotions, even when they don’t make sense to you. You don’t even need to get him to talk about it—just being there for him will help significantly. If he does talk to you about it, don’t make him feel like the matter is ridiculous or silly. Otherwise, he may never open up to you again.

Instead of hiding your feelings or keeping stuff from him, work on honesty. Make sure everything is laid out in the open for the both of you to resolve. Not being honest with your partner will have a significant long-term effect on your relationship. It could lead to fights, sleepless nights, and broken trust that might just be the difference between the both of you going the distance or severing your bond.

Work on Making Him Feel Secure

If you’re in it for the long run, don’t play any games. Make sure your man knows that you’re there for him, and that there is nobody else to worry about. It’s important for him to feel secure in the relationship.

Just like a lot of women, a sensitive boyfriend is susceptible to feelings of doubt and insecurity. Do not feed his insecurity. Instead, do everything in your power (within reason), to make sure he knows you love him and appreciate him.

Own Up to Your Mistakes

It’s easy to expect your significant other to “man up” and apologize even if he did nothing wrong. That’s not only an extremely unhealthy way of thinking in a relationship, but it’s also incredibly wrong regardless of whether your boyfriend is sensitive or not.

When you know you’ve made a mistake or did something to hurt his feelings, apologize. An early apology goes a long way to prevent simmering bad emotions. You don’t want one little fight to branch into other fights. Of course, when you apologize, you should also prove it with your actions. You have to look and actually be sorry, and you shouldn’t repeat the hurtful behavior.

When you’re unsure of what to say, listening can really help. Take the time to listen and really absorb what your significant other has to say. This can be a great learning opportunity to get him to open up to you.

You’ll be better equipped to resolve conflicts when you know where the other person is coming from. It’s healthy to hear each other out, no matter how scary it may seem.

Just because he’s a guy doesn’t mean he’s immune to flattery, compliments, and expressions of love. It’s a good idea to give him a sincere compliment every once in a while. It will help him develop security, and understand that you appreciate him.

It’s also a good idea for you to learn what your partner’s love language is. Whether it’s spending time together, or a thoughtful gift, he’ll love that you’re pouring all this time and effort to show him that you love him.

Work on Your Feelings Together

Discussing your emotions with your partner not only opens up a deeper connection, but it also allows the both of you to figure out how to navigate any negative emotions you might be feeling.

A great exercise is to talk about what you love about each other, or to share how you feel regularly. Even if you’re not facing conflict, it’s a good idea to open up and discuss your feelings with your partner.

Figuring out how to deal with a sensitive boyfriend can be difficult at first, but it’s worth the effort. Just remember that they’re more receptive to understanding how you feel so you should make an effort to do the same. The main idea is to make sure you keep an open line of communication with your significant other.

It may be a big adjustment in the beginning, but if you put in the work you’ll be able to nurture a successful and healthy relationship in no time.