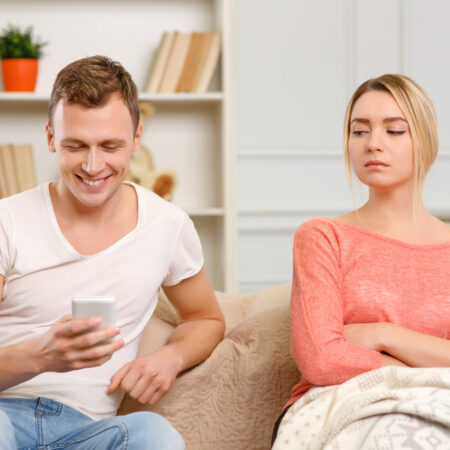 Sometimes, it’s natural to wonder if your boyfriend still has feelings for his ex. But if your suspicions have been raised by anything your boyfriend has said or done, it’s hard to separate mild suspicion from actual cause for concern.

Want to know if your boyfriend still has feelings for his ex? We’ve covered everything you need to know.

6 Key Signs Your Boyfriend Still Has Feelings for His Ex

If you’re worried your boyfriend still has feelings for his ex, here are six telltale signs you should look out for.

But it’s important to make a distinction here. If he’s only in sporadic contact, maybe that’s okay. If he’s in contact for practical reasons or the two of them have a shared group of friends, it’s probably not a cause of concern. It’s important you judge what’s appropriate and inappropriate according to the unique situation you’re in.

Talking about your ex a little is okay—so if your boyfriend occasionally talks about his ex, you probably have nothing to worry about.

But if your boyfriend is constantly and routinely talking about his ex, that might be a bad sign.

If he’s very nostalgic about his ex, that’s also likely cause for concern. We’re largely only nostalgic for the things we miss, and if your boyfriend misses his ex in any profound way, he probably still has feelings for that person.

#3: Your Boyfriend Has Strong Emotional Reactions in Relation to His Ex

When you guys talk about his ex, does your boyfriend have strong reactions? If he has strong reactions, whether positive or negative (or both), that’s not a good sign. But if he’s pretty balanced, unemotional, cool, and objective when talking about his ex, he’s probably no longer emotionally invested in him or her in any way.

#5: He Still Has His Lots of His Ex’s Old Stuff 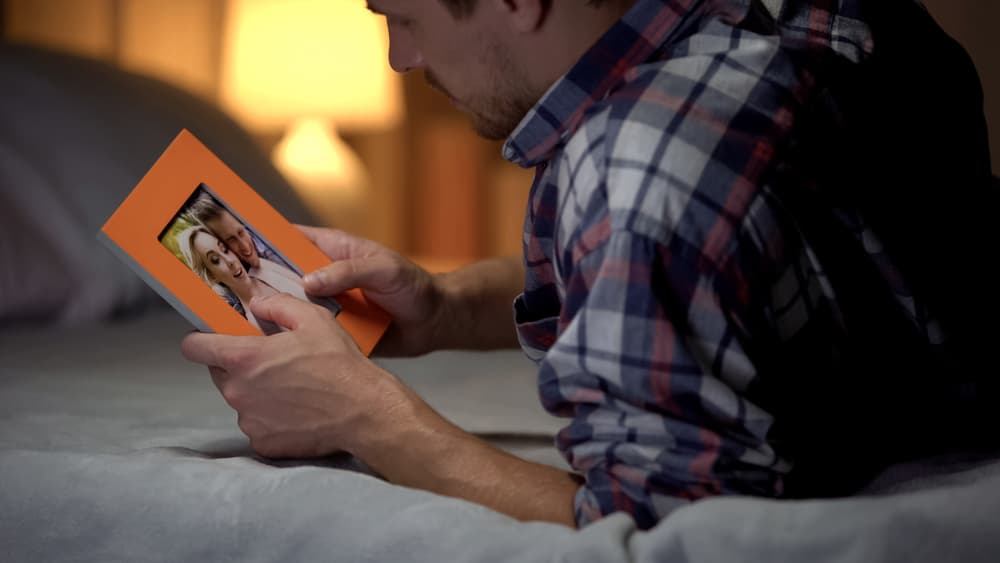 Does your boyfriend hoard some of his ex’s clothes and possessions? Does he still have physical photographs of the two of them? Has he kept lots of the sentimental gifts that his ex bought for him?

If your boyfriend is keeping lots of items he associates with his ex, he might still have some mental attachment to that person. It can also be a sign that’s just too lazy to throw things away or he doesn’t want to contact her to give them, so take that into consideration, as well.

#6: He Still Hasn’t Introduced You to His Friends and Family

If you get the feeling your boyfriend isn’t proud to be around you or he isn’t proud to introduce you to the important people in his life, it’s possible he’s using you as a rebound from his ex.

If it’s still early in your relationship, this might not be a concern, but if you’re a few months in and you haven’t met any of his friends and family, that’s likely something you need to talk about. If you’re not seeing each other very often, that might also be something you need to discuss.

If you’re certain he still has feelings for his ex, you might be tempted to resort to all kinds of bad behaviors. Here are the things we strongly suggest you avoid doing.

Don’t Obsess Over It

Who is this going to benefit? It won’t help you, it won’t help him, and it won’t help your relationship. All this will do is create an unhealthy thinking pattern, and once established, you’ll find it very difficult to break the pattern.

Don’t Start Looking Through His Phone 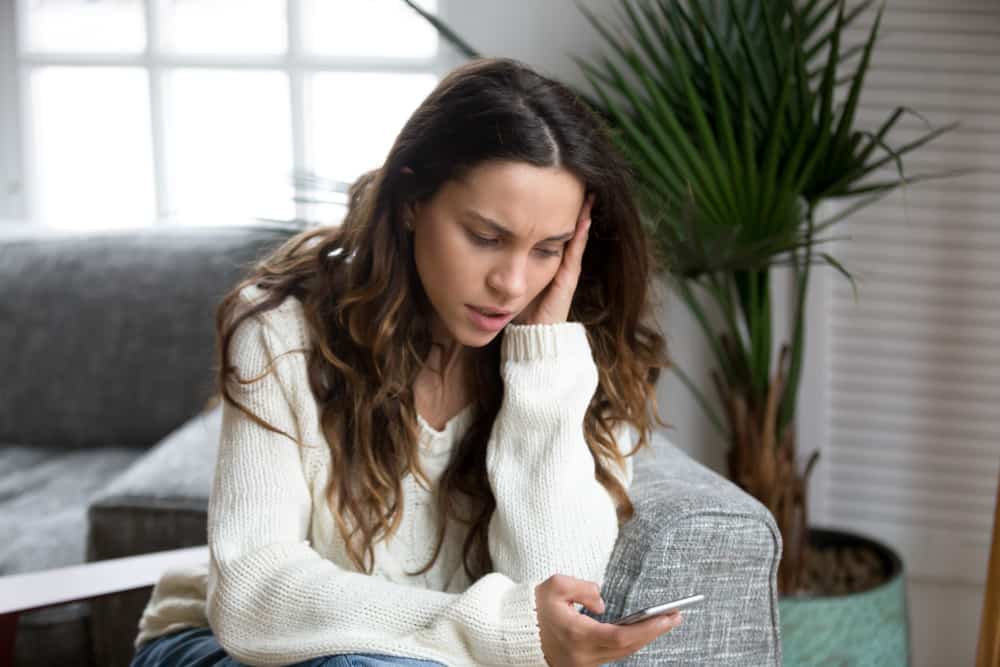 This is always a no-no. Even if you don’t trust your boyfriend, you shouldn’t behave in a distrustful way yourself. If you suspect your boyfriend might be secretly messaging his ex, ask him about it instead of looking at his phone.

Once you start looking at your boyfriend’s phone, it’s a hard habit to break, and it’s not a trustworthy foundation to build a relationship from. It’s also illegal.

Don’t Ask Your Boyfriend Endless Questions About His Ex

You’ll annoy yourself, you’ll annoy him, and you’ll drive a wedge between the two of you. Even if your boyfriend is still thinking about his ex, asking endless questions isn’t going to solve the problem—it’s just going to make you feel worse.

So there are still photos of your boyfriend and his ex on social media. Who cares? At some point in time, those photos were uploaded. Unless your boyfriend is looking back at these photos and weeping, don’t worry about it. Worrying too much about social media is an unhealthy habit, especially in this context.

That said, if your boyfriend is constantly commenting on his ex’s posts, that probably is something to worry about, but the chances of him doing that are (hopefully) pretty slim.

Instead of snooping and spying, here are the things you do need to do when your suspicions rise.

How to Talk to Your Boyfriend

We can give you all the tips, hints, hacks, and help we know, but we don’t know you, your boyfriend, or your specific situation.

The only way you can really get a handle on what’s going on is by talking to your boyfriend. Encourage him to be honest and tell you how he really feels, both about his ex and about you and your relationship. Tell him that you’d rather know if he has feelings for his ex, and discuss your next steps with him.

What to Do if He Still Has Feelings for His Ex

If your suspicions are confirmed, you’re gonna feel pretty horrible for a while, but knowing is always better than not knowing.

If your boyfriend does indeed tell you that he still has feelings for his ex, you’ll then need to decide how to move forward. Do you give him a little more time to get over his ex? Do you break up immediately? Do you go on a break for a little while?

Do what’s best for you both, and think about what you both genuinely want. But remember—if you have a boyfriend who doesn’t like you in the way you want him to, that’s not fair to you. Even though it’s hard, it’s sometimes best to go your separate ways, if it’s for the right reasons. You deserve someone who likes you and who wants to be with you.

Hopefully, that’s everything you need to know about whether or not your boyfriend still has feelings for his ex.

Using the help, tips, and advice above, you should be able to work out whether you have anything to worry about. Remember, it’s totally okay for your boyfriend to have fond memories of his ex, but it’s totally not okay if he still has feelings for his ex. If you can discern the difference, you can then deal with your situation accordingly.

But the main thing to remember is this—most of the time, people split up for the right reasons. If you’re suspicious, there’s a small chance that your boyfriend still has feelings for his ex, but it’s pretty unlikely. Talk to your boyfriend, find out how he feels, and everything will probably be okay. If it’s not, we know you’re strong enough to get through it.