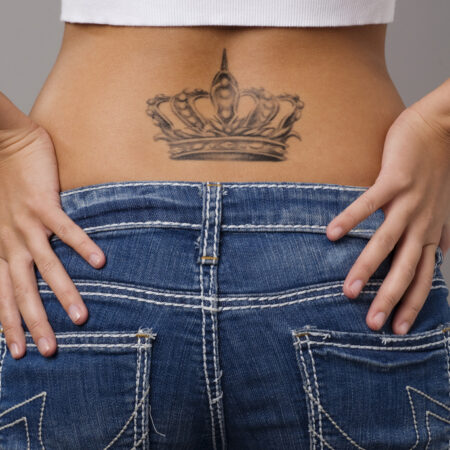 The crown is one of history’s most recognizable symbols, and a crown tattoo can be just the thing to perfectly capture the elegance and power that the real item holds. Crown tattoos have many possible meanings, and there are a large variety of other elements that you can combine with them to create a uniquely significant image.

If you are interested in a crown tattoo and want to make sure that its meaning matches up with your ideals, read on! In this article, we will discuss the history of the crown, the potential meanings it can bring to your tattoo, and ideas for themes you can combine with the crown to create a one-of-a-kind tattoo.

The Crown Throughout History

Crowns have been utilized all over the world as a symbol of royalty or to mark the importance of an individual. They have been discovered in countries all over the globe, with some relics dated to be as old as 4,000 years.

Many cultures, from the Egyptians’ uniquely shaped crowns to the Native Americans’ feather and material headdresses, have used crowns as a significant part of their culture.

The most well-known use of crown, however, is the role it plays in royalty. They are a key part in the coronation ceremony of many royals and are most recognized for their part in British monarchy traditions, which have been ongoing for thousands of years.

More recently, the crown has been associated with a darker side of history. The symbol started being used by perpetrators of sex trafficking around the 2000s; the crown is usually tattooed onto a victim’s body along with the pimp’s initials as a type of branding.

It may also be combined with money bags, expletives, or barcodes. However, the positive history of this symbol is much more pronounced, and you should not let this unfortunate meaning stop you from choosing a crown tattoo if you really want one.

The crown can bring many different meanings to your tattoo. Below, we’ve listed the most common values behind this elegant symbol for you to look through.

Crowns have long been used as symbols of royalty, which often comes with authority and power over others. Many people who receive a crown tattoo want to convey a sense of power that resides in their personality, or represent the fact that they are in control of themselves and any life events they may experience.

It could also signify that the person with the tattoo is trying their hardest to take control of their life and be the best person they can.

It may also represent the fact that they understand that any authority or confidence they have must be used wisely, or that strength, kindness, and caring is especially important to them.

Honor and pride are very important themes when it comes to crowns, as the item is often used as a symbol of social standing and family heritage.

Many people will choose a crown tattoo to represent their pride and strong sense of self-belief, or they may receive this tattoo as a symbol of pride and honor in their family.

The crown has significant religious significance, most namely in the Christian religion; Jesus was made to wear a crown of thrones during his crucifixion, so many people will have a similar looking crown tattooed on themselves as an homage to their beliefs.

The Christian crown can also represent happiness, joy, or resurrection.

For those who follow a more spiritual belief system and have a strong foundation in mediation and working with chakras, the crown tattoo can take on a fairly unique meaning. It is used to represent the crown chakra, which is the chakra that is believed to give one a strong connection with energy and the universe.

The color purple is also associated with the crown chakra, and someone who gets a tattoo with these themes may be wanting to express their connection with the universe or their beliefs in energy work.

In the Zodiac, the sign of Leo is associated with the symbol of the crown. Leo, the lion, is also thought to be the “king of the jungle,” so it is common to see a tattoo with both a crown and a lion to represent this meaning.

Someone may also have a simple crown to represent their connection with their zodiac sign and the personality traits it stands for.

As a Couple’s Tattoo

It is common to see couples who wear matching king and queen crown tattoos. When given as part of a matching pair like this, the crown can bring a meaning of love, dedication, and trust, as well as signifying the positive power that each partner has over the other. 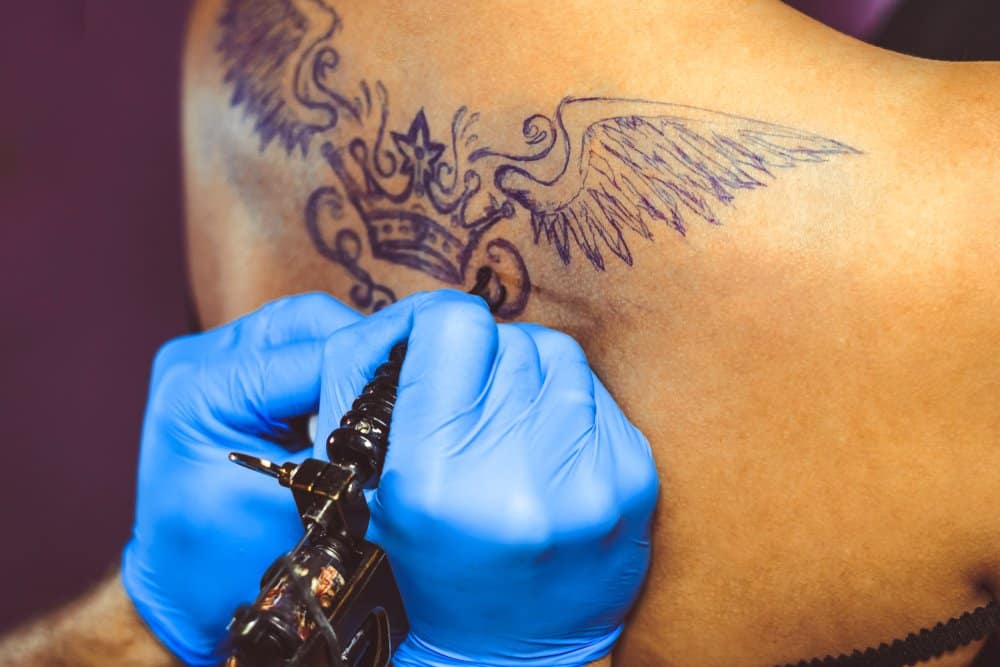 These elements are often combined with crown images to enhance or deepen the meaning of a tattoo.

Colors play an especially important part in the meaning of a crown tattoo. As we discussed above, purple represents the crown chakra, so a purple crown could further strengthen this meaning.

An incredibly popular tattoo element, various types of flowers are easily incorporated into crown tattoos. They can give the tattoo a more feminine feel and be part of a representation of feminine power and authority, or they can be a sign that the tattoo wearer honors nature and sees it as an important part of their life.

Animals, like the lion, can be incorporated into crown tattoos to further bring home the meaning of the Zodiac, but other animals that people love and appreciate can also be included. Tattoos like these might mean that the person values that specific animal highly, or that they feel a need to show their dedication to that animal.

It could also be a pet that is tattooed near the crown in order to represent the power that their pet has over their lives and emotions.

The crown can symbolize pride and dedication to family, so tattooing names and dates near a crown tattoo can further drive home that meaning. Anything from a loved one’s name to a child’s birth date to an anniversary can be included on these tattoos.

It is a good way to further represent the place of significance and value that certain important people hold in your life.

Crown tattoos can look fantastic just about anywhere, but there are some placement areas that are more popular than others.

For instance, many people who use the crown as a symbol of their faith or Christianity will have it tattooed on their wrist. This allows them to look down and draw inspiration from it during times of uncertainty.

The Arms, Legs, or Back

If a crown tattoo is combined with animals or names and dates, they are more commonly found on the arms, legs, and backs, as these spaces give a much larger canvas and are great for allowing the wearer to display their tattoos easily.

Consider Your Personal Meaning and Design

When deciding where to place your own crown tattoo, make sure to consider the meaning it has to you and what other elements or colors you want to incorporate. This will help you select an area that you love the look of and that can be seen as easily as you want. 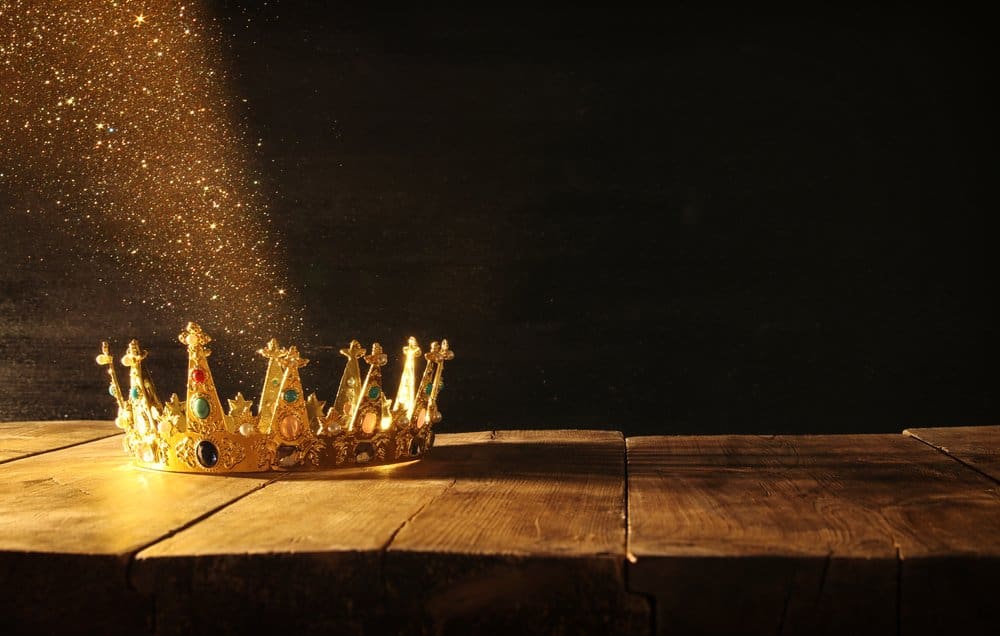 The decision to get a crown tattoo is a fairly easy one – the hard part comes when it is time to choose a specific meaning you want to convey. When researching crown tattoos, you should be looking at the potential meanings and how they apply to your life.

If something draws your attention strongly, further research that and any elements you can include to enhance the meaning. Before you know it, you will have a crown tattoo design you are sure to love!